Can Ford continue to hold off Toyota and Honda as they rebound in China due to the weakened yen?

When it comes to profits at America's second-largest automaker, Ford (F -3.46%)is a bit of a one-trick pony. It generates the vast majority of its revenue, and even more of its profit, from North America. However, that appears set to change quickly, and management is eyeing a substantial opportunity in China. Ford's operations in the nation have been transforming quickly, but the company has much ground to make up on certain competitors. The good news is that the Blue Oval started the year off on the right foot in January, but can the company hold off the big Japanese automakers, who are on the rebound in China?

By the numbers
Last month, Ford's wholesale units in China nearly reached 95,000. as you can see in the chart below, Ford has consistently grown its sales in this important auto market: 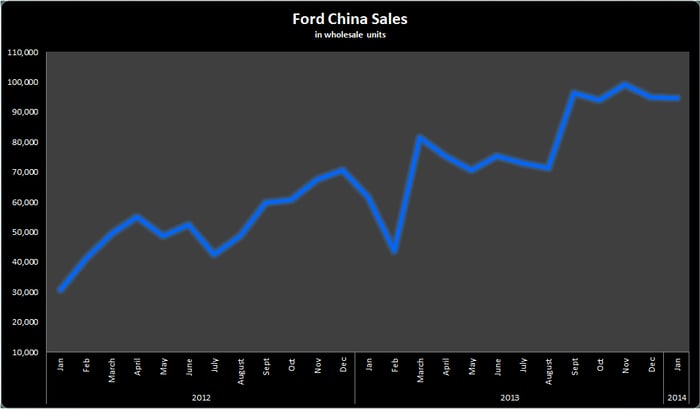 The surge in sales was led by Ford's passenger car segment which accounted for more than 72,000 vehicles -- a 63% improvement from January 2013. Of that surging segment, Ford's Focus was the clear leader; it reached sales of more than 36,000 units and continues to be the top-selling nameplate in the passenger market in China, according to IHS Automotive.

Another great sign for investors is the strong demand for the newer Mondeo (Fusion) nameplate, which sold nearly 11,000 units in January -- 51% more than the previous January. Thus far, Ford's new vehicle launches in China have seen great responses and strong demand from consumers, which will undoubtedly help the automaker meet its goal of doubling its market share from 3% to 6% in 2015.

With such a strong start to 2014, I fully expect Ford to top more than 1 million vehicles sold in China for the first time. In fact, last year Ford's sales in China surpassed those of its Japanese rivals Toyota (TM -2.28%) and Honda (HMC -1.57%), both of which it had trailed for much of the last decade. 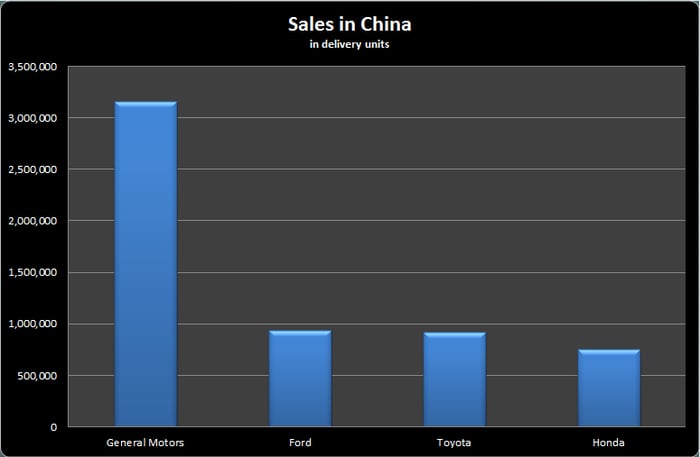 While topping Japanese rivals is a big accomplishment, Ford still has plenty of work left if it plans to catch its crosstown rival General Motors (GM -2.78%), which has a sizable lead due to getting into the market much earlier. The good news for Ford is that while GM is also setting record deliveries, it's market share and profitability in the region declined slightly last year. 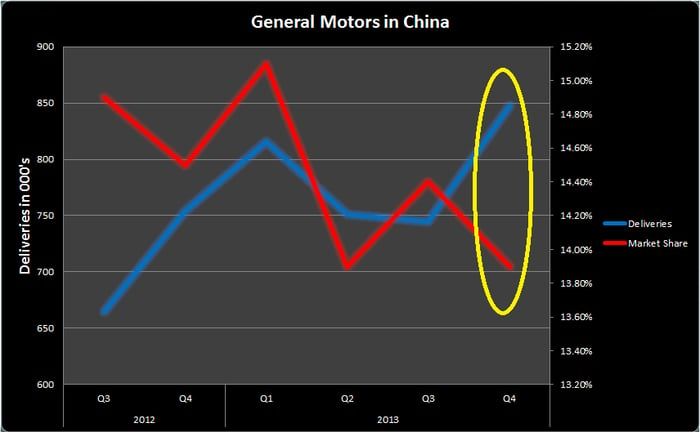 Looking ahead
Ford has changed its entire corporate culture and global operating strategy in the eight years since CEO Alan Mulally took the reins. While Ford is still catching up in China, its operations are transforming quickly and management remains optimistic about the opportunity in the Asia-Pacific region, where it has six major facilities under construction. That region represented about 8% of revenue last year but is expected to contribute as much as 40% by the end of the decade -- a huge win for investors if Ford can execute its new vehicle launches to capture this growth.

Investors would be wise to watch whether Ford can continue to take market share from General Motors. It will also be important to watch how Japanese automakers take advantage of a weakened yen, and how Chinese consumers are coming back around to their vehicles after a yearlong boycott of Japanese products due to a territorial dispute between the two nations. If Ford's new vehicles continue to be a popular option with Chinese consumers, and the company gains market share on GM while expanding its lead over Japanese rivals -- a tough task, no doubt -- 2014 will be a huge step in the right direction for Ford and its investors.