These teamings should have important ramifications for robotics stocks.

If you're following robotics, you know this space started heating up in 2013, thanks largely to Google (GOOGL -2.10%) snatching up eight robotics companies, and fellow tech bigwig Amazon.com announcing late last year its plans to use drones for short-distance deliveries.

So, it's not surprising that news on the robotics front is rolling in during 2014. Three notable robotics news stories have come out in barely more than a week. Two of them are big news and should have important ramifications for robotics investors: Lockheed Martin's (LMT -0.58%) teaming with AeroVironment (AVAV -3.22%), and Google's partnering with Foxconn. The third -- iRobot's (IRBT -2.07%) kudos for its patent portfolio -- might not come as news to some investors, though it certainly lit a fire under iRobot's stock.

First, here's a look at the year-to-date 2014 performance of the stocks discussed in this article. 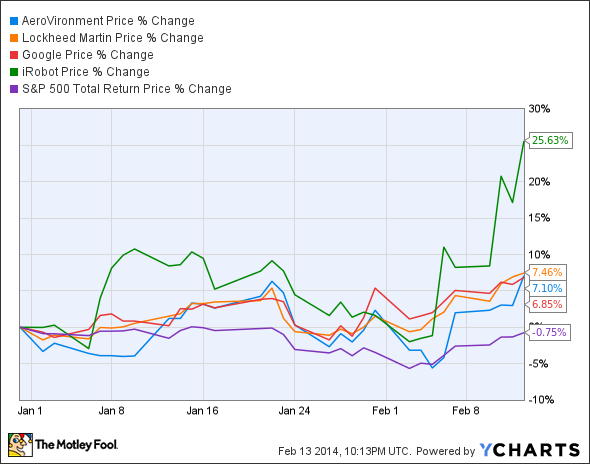 Google and Foxconn
Google has quietly been working with Foxconn on its robotics efforts, according to an article in The Wall Street Journal published on Tuesday. Foxconn, also known as Hon Hai Precision Industries, is the world's largest contract manufacturer of electronic devices. The Taiwanese company is likely best known for being the Apple partner that assembles iPhones and iPads.

That scenario makes perfect sense. Google gets to test its robots in large, real-life environments before rolling them out for manufacturing automation applications, if that's one of its game plans – and it certainly seems so given this news. Foxconn, for its part, gets Google's assistance in automating its factories. This is ideal timing for Foxconn, which had previously announced plans to speed up its automation efforts due to the increasing labor costs and worker disputes in China.

The New York Times article that broke the news in December that Google had bought eight robotics companies during the last half of 2013, speculated that Google intended to use its robots for two purposes: in its retail efforts against Amazon and others (for delivery, for instance), and in manufacturing applications. The former use made sense to me, though I didn't think it seemed likely that Google planned to stray from its consumer focus by getting into the manufacturing facility automation business. In light of the Journal's report, it seems I was likely wrong, right along with others who shared the same view.

The plant automation space will provide Google with an entirely new revenue stream, which is certainly a positive for Google investors.

This seems to be an ideal teaming, as it couples Lockheed Martin's expertise in systems integration with AeroVironment's experience in unmanned aircraft solutions. Additionally, Lockheed Martin's size and connections should prove a boon to small AeroVironment, which has a market cap of $672 million. In addition to making drones for the military, AeroVironment is also involved in manufacturing and installing charging systems for electric vehicles.

Specifically, the companies will be working together to develop innovative systems built around Global Observer, which is AeroVironment's hybrid-electric, stratospheric drone platform that provides reconnaissance and communication over any location in the world. Roy Minson, AeroVironment senior vice president and general manager of its unmanned aircraft systems unit, noted the demand for such systems: "Numerous customers are seeking persistent solutions for wide area applications, such as border surveillance and communications, that are much more affordable than those available previously."

The robotic maker, best known for its home cleaning robots, although it also makes robots for defense and commercial applications, ranked No. 5 overall in the electronics and instruments industry. It scored higher than such heavyweights as Samsung and Philips Electronics

Further, iRobot took the No. 2 spot in the "Science Strength" category, and No. 4 in "Industry Impact" among the 50 top companies in its industry group. Science Strength measures the degree to which a company's patent portfolio is linked to core science, while Industry Impact measures the impact of a company's patents on technology developed by the rest of the industry.

Shares of iRobot gained more than 11% on Tuesday, gave up a bit of ground on Wednesday, and then tacked on more than 7% on Thursday, as the market seemed ecstatic about the company's patent might. iRobot's stock is now up 25.6% year to date in 2014, following a spectacular rise of 85% in 2013.

Patent strength should bode well for the company, of course. That said, it seems likely that part of this week's stock price rise can be attributed to some leftover cheer about the company's quarterly earnings report, which came out last Wednesday. iRobot posted quarterly earnings per share of $0.11 versus a loss of $0.21 in the year-ago period, while revenue was up 25.5%, to $126.3 million. EPS beat analysts' expectations by $0.01, while revenue was roughly in line with the consensus. Investors largely viewed the report positively after deciding to focus on the strong results in the company's home segment and the longer-term growth prospects, while discounting the company's weaker-than-expected 2014 guidance.

Beth McKenna has no position in any stocks mentioned. The Motley Fool recommends AeroVironment, Google, and iRobot. The Motley Fool owns shares of Google and Lockheed Martin. We Fools may not all hold the same opinions, but we all believe that considering a diverse range of insights makes us better investors. The Motley Fool has a disclosure policy.

Why Is Lucid Stock Plunging Since November?
358%