Strong earnings reports from Expedia, TripAdvisor and Orbitz could be a positive sign regarding Priceline´s earnings announcement next week.

Judging by recent reports from companies like TripAdvisor (TRIP -6.41%), Expedia (EXPE -6.31%), and Orbitz Worldwide (NYSE: OWW), the online travel industry seems to be firing on all cylinders. Does this mean investors should expect strong earnings from Priceline (BKNG -4.24%) next week?

A leading player in a growing industry
Priceline is the market leader among online travel agencies, especially when it comes to international markets. The company owns a dominant position in Europe, where Booking.com generates a big chunk of Priceline's profits.

Even under harsh economic conditions, Europe is a main destination for travelers from all over the world, and its highly fragmented hotel industry makes the old continent especially attractive for online travel companies.

In addition, Priceline is rapidly expanding in emerging markets like Asia and Latin America, where the online booking industry has a much lower penetration rate in comparison to the U.S.

Priceline is predominantly focused in the agency business model, which means allowing hotels and other service providers to list their own offers, and pay the company a commission for every transaction. Competitors like Expedia, on the other hand, rely more on the merchant model, buying blocks of rooms and selling them at a mark-up to travelers.

Priceline's strategy has proven to be more efficient and dynamic over time, and the company has considerably outgrown competing online travel agencies like Expedia and Orbitz Worldwide by a wide margin through the last several years. 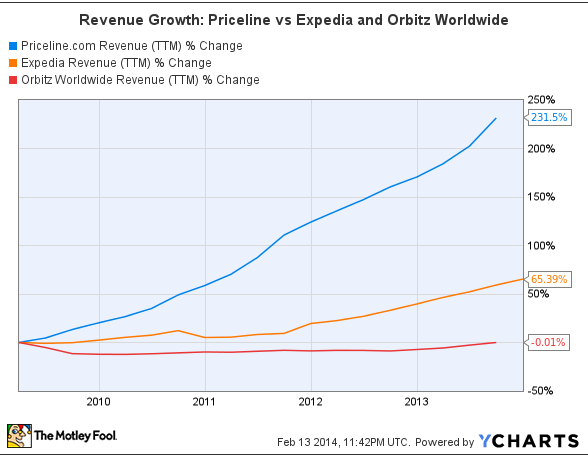 Firing on al cylinders
Online travel portal TripAdvisor reported better-than-expected performance for the fourth quarter of 2013 on Tuesday. Revenues came in at $212.7 million, a 25.5% growth rate versus the same quarter in the previous year, and better than analyst's forecast of $205 million for the quarter. The company also announced a big increase of 50% in total traffic during the quarter.

Click-based advertising grew 17%, to $144.4 million, and display-based advertising sales increased by a whopping 46%, to $32.5 million during the fourth quarter. Revenues from subscriptions, transactions, and other services jumped 53%, to $35.7 million in the quarter reflecting healthy demand across the board for TripAdvisor.

Expedia announced earnings on Feb. 6, and the company provided more encouraging news for investors in the online travel business. Revenues grew by 18% year over year to $1.15 billion during the quarter, and gross bookings increased 21%, to $9.1 billion. Excluding the impact of the acquisition of Trivago, sales increased 14%.

Hotel room nights increased by a big 25% annually during the quarter. Considering that hotel bookings represent a material proportion of Priceline's business, strong hotel revenues from Expedia bode well for Priceline in terms of industry demand.

Orbitz Worldwide is materially smaller than Priceline or Expedia, and the company has been experiencing difficulties trying to compete efficiently while sustaining profitability during the last quarters. However, the stock exploded nearly 29% higher on Thursday as Orbitz reported sales and earnings above expectations for the fourth quarter of last year.

Revenues came in at $197.4 million during the quarter, a 4.1% increase versus the prior year, and higher than the $191.2 million expected, on average, by analysts. Hotel room nights grew 15% during the fourth quarter and 18% for the full year 2013.

Looking forward
Considering that recent performance from other companies in the online travel business has been particularly strong lately, investors should pay close attention to Priceline´s earnings report coming on Feb. 20.

It will be crucial to watch if Priceline continues gaining market share versus the competition, or if smaller players are closing the gap and capturing a bigger proportion of overall demand growth.

On a long-term basis, it's important to note that online travel companies are reporting outstanding performance in spite of lackluster consumer spending during the last months. This could be indicating that this secular growth story is far from reaching any kind of market saturation point.

Bottom line
Players like TripAdvisor, Expedia, and Orbitz Worldwide are reporting solid financial performance lately, and this bodes well for Priceline's upcoming earnings report, especially if the company has managed to sustain, or even increase, the market share gains it has achieved over the years. From a long-term point of view, healthy industry demand shows that online travel companies may be just taking off in terms of growth potential during the coming years.