New tests for lung cancer and melanoma and ongoing growth for BRCA testing, thanks in part to ongoing late stage trials for BRCA targeting drugs from AstraZeneca and BioMarin (NASDAQ:BMRN), could make for a busy 2014 too. 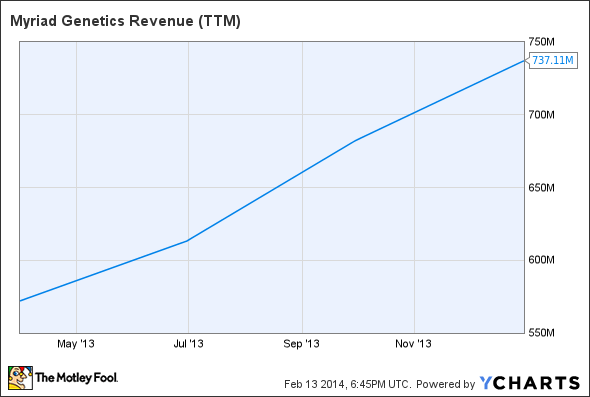 What's at stake?
Personalized medicine is one of the hottest areas for drug development. Identifying over or under expressing proteins, and turning on or off key receptors, offers an intriguing step forward in transforming cancer into a chronic disease.

Some of the biggest advances in personalized medicine are occurring in breast and ovarian cancer -- two forms of cancer with a significant unmet need. Discoveries by AstraZeneca, BioMarin, and AbbVie (NYSE:ABBV) offer new hope for patients given between 20% and 25% of all diagnosed patients possess mutated BRCA genes.

These new PARP-inhibiting drugs offer upside to Myriad because its BRACAnalysis tool is being used to identify patients most likely to benefit from treatment. AstraZeneca is using the tool in its phase 3 trial of Olaparib in ovarian cancer following a retrospective study showing progression free survival for patients treated with the drug was 11.2 months in a mid stage trial, versus 4.3 months for patients in the placebo group. BioMarin is similarly using BRACAnalysis in its phase 3 trial studying BMN-673 as a breast cancer treatment. In mid stage trials, 50% of patients treated with BMN-673 responded to the drug.

Despite these promising compounds still being in trials, Myriad's BRACAnalysis is already making Myriad big money. BRACAnalysis sales grew 28% to $141 million in the most recent quarter, accounting for 70% of the company's sales.

Growing the business
Creating a one-stop shop for detecting gene defects associated with cancer is Myriad's ultimate goal. The company is expanding the use of its existing tests, launching new products, and combining tests to create more comprehensive offerings.

One of its most successful products this year was its BART test. BART detects BRAC large rearrangement, which happens in less than one percent of BRAC tested patients. BART won inclusion in guidelines from the National Comprehensive Cancer Network last year, helping drive sales 57% higher year-over-year to $24.7 million in the most recent quarter. Sales of Myriad's Colaris family of hereditary colon cancer tests are also growing quickly; increasing 29% year-over-year to $15.6 million last quarter.

The September launch of myRisk, a more comprehensive cancer screening test, may insulate the company from competitors challenging BRACAnalysis. Sales of myRisk got off to a good start last quarter, generating $11.5 million in sales. Sales of myRisk should climb more this year given Myriad recently presented data showing myRisk detected 52% more patients at high risk of hereditary breast and ovarian cancer than testing for BRCA1 and BRCA2 mutation alone.

Fool-worthy final thoughts
Not only is Myriad selling more tests, it's also seeing more of those sales fall to the bottom line. During the fourth quarter, its operating margin grew by 3.4% to 40.7%. The boost translated into earnings per share of $0.66, up 57% year-over-year last quarter. Results for the full year were also strong.  Sales rose 44% to $406 million and EPS expanded 72% to $1.33.

Investors should keep an eye on results this year to see if Myriad's newest products, myPlan for lung cancer and myPath for melanoma, gain traction. It will also be interesting to see if European sales benefit from overseas launches of myRisk and myPath. If so, Myriad may be able to over-deliver on its recently boosted guidance for $740 million to $750 million in sales and $2.09 to $2.12 per share in earnings for 2014.