The past year has been rough on game developers as a choppy transition to next-generation consoles and the rise in mobile gaming have left the industry struggling to maintain revenue and profit. Large developers such as Electronic Arts (EA 2.50%) and Zynga (ZNGA) continue to generate GAAP losses due to both internal and external pressures. With this backdrop, Activision Blizzard's (NASDAQ: ATVI) fourth quarter results are even more impressive and makes the company certainly worth a closer look by Foolish investors.

Activision's consistently solid earnings
Activision beat market expectations by reporting non-GAAP diluted earnings per share of $0.79 and revenue of $2.3 billion. The strength of these results relative to a weak overall gaming industry is a result of management's strategy to focus on making a few high-quality, profitable, and long-lasting franchises. The continued success of Call of Duty, World of Warcraft, and Skylanders continues to drive Activision's results just as it has for the past couple of years.

This focus on a limited number of megatitles that do not rely heavily on licensing from third parties has led to a noticeable trend in operating margin: 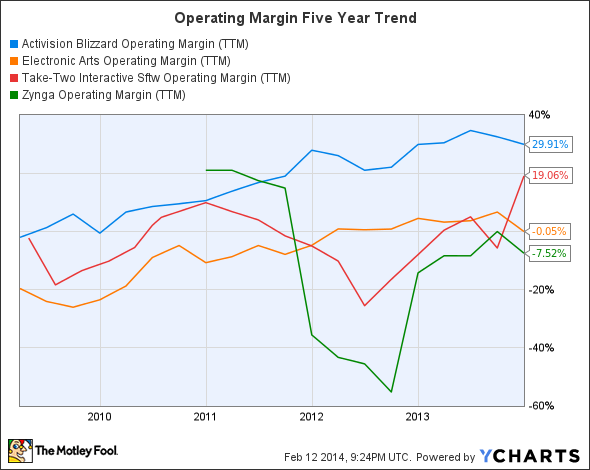 Strong free cash flow provides flexibility
Another way that Activision differentiates itself from the competition is its steady free cash flow. This strength is derived from recurring revenue streams from World or Warcraft and Call of Duty: Elite as well as the frequent release of new titles and content within the major franchises. The result is remarkably strong cash flow that exceeded $1 billion for the second year in a row.

Why mention cash flow separately from income? Activision's management has a strong commitment to return value to shareholders through prudent balance sheet management. This quarter's earnings release captured this commitment with a quote from CEO Bobby Kotick:

"Over the last five years, through dividends and share buybacks, we have returned almost $10 billion dollars to our shareholders and today we announced an increase to our annual dividend and repayment of $375 million of debt."

Activision is putting its superior cash flow generation ability to good use through de-leveraging following the transaction to gain independence from Vivendi, continuing to reduce outstanding share count, and increasing its annual dividend.

In contrast, EA, Take Two Interactive (NASDAQ: TTWO), and Zynga continue to grow the number of shares outstanding and no not pay a regular dividend.

Outlook for 2014 and beyond
While fourth quarter results are certainly important, the outlook that Activision provided on the earnings call is even more significant for investors. First, Activision expects growth and further margin expansion thanks to the transition to the next-generation consoles during 2014; this catalyst is one that has raised expectations across the gaming industry. However, Activision is not simply relying on the console refresh cycle and has big plans including the release of Destiny and four Call of Duty releases. To get a sense of scale, management expects Destiny to be the company's third franchise to reach a billion dollars in sales.

Second, Activision believes it has cracked the code for profitable mobile gaming, and has three titles on the way that it expects will be hugely successful. The first, Hearthstone: Heroes of Warcraft, has already attracted millions of users to the public beta test. As Zynga's results demonstrate, not every company can find a profitable model in mobile gaming; however, Activision's disciplined management stands out with its track record of making sure both the gameplay and economics are right prior to releasing a new title.

Activision finished 2013 with strong momentum and consistent performance. Console, PC, and mobile gaming will all contribute to Activision's growth in 2014. With a pipeline that the company calls its "strongest slate in its history," there are plenty of reasons to pick Activision over its peers.