The Netflix service and the House of Mouse are teaming up to stream some exclusive content early next month -- but there's loads more on the way.

Netflix (NFLX -1.64%) and Disney (DIS -2.06%) are getting more exclusive. The two companies just announced a licensing deal that makes Netflix the only home for Lucasfilm's animated TV series Star Wars: The Clone Wars. But the pact isn't limited to just the five seasons that already aired on television: a sixth chapter will start streaming in March -- only on Netflix. 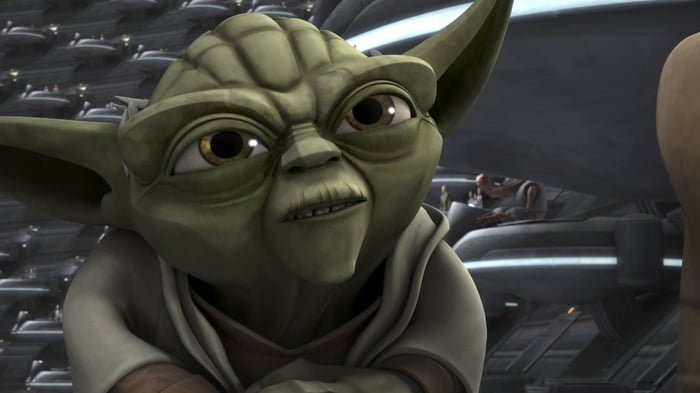 Sure, the final season of a canceled TV show is a modest commitment for a powerhouse like Disney. But it's really just the start of a huge amount of fresh content that the entertainment giant will be broadcasting through Netflix's service over the coming years.

Taking advantage of an "incredible platform"
Next in line will be a number of new Marvel properties. Starting in 2015, Netflix will be the exclusive home of serialized dramas based on some underexposed characters from the Marvel universe. The shows are set to come out over a span of four years, beginning with a series focused on Daredevil, and followed by Jessica Jones, Iron Fist, and then Luke Cage.

In announcing the deal, a Marvel executive explained why the two companies were linking up so closely, saying, "Netflix offers an incredible platform for the kind of rich storytelling that is Marvel's specialty."

The deal is a win for Netflix, too, as it helps the company pioneer new entertainment models that are right in line with its recent binge-viewing push. As Chief Content Officer Ted Sarandos said at the time, "We're thrilled to be working with Disney and Marvel to take our brand of television to new levels."

Pushing the relationship to the "next level"
But the deepening Netflix-Disney relationship isn't limited to just TV. Beginning in 2016, Netflix will be the exclusive streamer for first-run feature films across Disney's properties of Pixar, Marvel, Lucasfilm, and Disney Animation studios.

This licensing agreement goes beyond "second window" releases that put hits like the Marvel's Iron Man and The Avengers onto Netflix's service almost a year after hitting theaters. Instead, it is an exclusive, "first window" deal, meaning that the new movies will arrive on the Netflix streaming service -- and only that service -- just a few months after their theater runs end.

Netflix CEO Reed Hastings boasted about the agreement in a conference call with analysts, stressing how important it was. "The Disney deal is particularly significant because it is our first 'Pay 1' deal with a major studio in the U.S. and because of the strength of the Disney, Pixar, Marvel and Lucasfilm titles," Hastings said.

Disney, which is surely getting paid well for this batch of content, sounded just as happy with the deal. An executive with the company said, "we are thrilled to take our highly valued relationship with Netflix to the next level by adding Disney's premier films to their programming line-up."

What's ahead
There's every reason to think that the Netflix and Disney relationship is only getting started. As Netflix approaches 50 million subscribers in more than 40 countries, its content needs are massive. Meanwhile, Disney could use a global outlet for its portfolio of properties that's set to balloon over the next few years with new brands from Lucasfilm, Pixar, and Marvel.

The two companies have already shown that they're willing to make huge bets on each other that should end up advancing both of their ambitions. A short animated Star Wars episode that streams next month will be just the start.

Demitrios Kalogeropoulos owns shares of Apple, Netflix, and Walt Disney. The Motley Fool recommends and owns shares of Apple, Google, Netflix, and Walt Disney. Try any of our Foolish newsletter services free for 30 days. We Fools don't all hold the same opinions, but we all believe that considering a diverse range of insights makes us better investors. The Motley Fool has a disclosure policy.