When it comes to the insanely loyal truck market, you're either a Ford guy or Chevy guy -- that's about it. Ford's F-Series has long been outselling the Silverado, but there's more to the story.

Ford's 2015 F-150 could be a game-changer in the full-size pickup segment. Source: Ford Motor Company

It's no secret that Ford's (F -1.35%) F-Series has been America's best-selling pickup truck for 37 consecutive years, and the best-selling overall vehicle for 32 straight years -- complete dominance. However, as some are quick to point out, that doesn't tell the whole story. When combining sales from General Motors' (GM -0.16%) two separate brands of trucks, Chevrolet's Silverado and GMC's Sierra, the race becomes much closer between America's two largest automakers. So is Ford really on top of GM when it comes to truck sales? Maybe more important, which will be king of the hill going forward?

By the numbers
The sales figures over the last 16 years are incredibly close when comparing Ford's F-Series versus General Motors' Silverado and Sierra combined. Consider that Ford has averaged 745,747 F-Series sales annually since 1998, which slightly edges out GM's Silverado and Sierra combined average of 744,150. Doing the math, that brings Ford and GM's respective totals to 11,931,954 and 11,906,396, with Ford narrowly topping its cross-town rival. While the results from the last 16 years are ridiculously close, Ford has definitely built a large advantage since the recession. 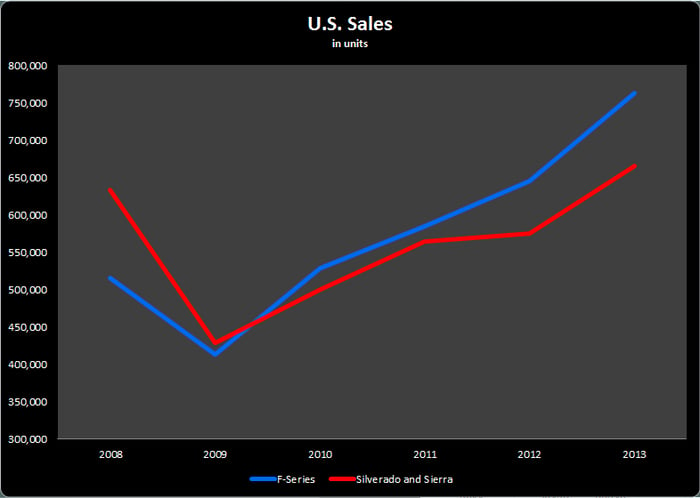 It's clear that two factors have given Ford more of a lead than usual, over the last few years. First, the fact that General Motors filed for bankruptcy and received unusual treatment during the process has definitely hurt its image. The nickname "Government Motors" will certainly outlive the government's ownership of the company, which has already come to an end. Second, GM's two trucks were long overdue for a makeover and were getting beat in sales due to the late refresh. The bad news for GM fans is that the all-new designs that hit the showroom in mid-2013 aren't taking advantage of the small window of opportunity before Ford's next-generation F-150 goes on sale later this year.

Consider recent sales, where the Silverado and Sierra should be gaining market share on the older F-150. Instead, sales of the Silverado and Sierra declined 16% and 4.6% in December, compared with an 8.4% rise for Ford's F-Series. The trend continued in January when sales of GM's two trucks declined 18.4% and 13.5%, compared to a better looking decline of 0.7% for the F-Series.

More to the story
Now, we also have to consider some factors beyond sales. Because GM's trucks are newly redesigned, the company was initially reluctant to offer larger incentives on its trucks, which lower profits, as Ford must do to keep a higher pace of sales with its older pickup offering. Looking at the average transaction price can give us more insight to how well GM's trucks are doing.

According to Kelly Blue Book, the Silverado's ATP increased 12% to $40,575 -- meaning that even as sales slow, each one is more valuable. The bad news is that even with the Silverado's 12% increase, because of having a newly designed model, it still trailed Ford's older F-150 which averages $40,672. That's very bad news for Silverado fans, as Ford's next-generation truck will likely significantly boost its ATP.

If you don't believe those numbers have the folks at GM worried, wait until you hear what's next. Those results likely played a factor in the company's decision to increase its incentives to try and drive sales of the Silverado higher.

GM is offering some of its biggest incentives in months during February's month-long Presidents Day promotion. The deal runs through Feb. 28 and offers the deepest discounts on its trucks so far, and both the Silverado and Sierra will be offered at discounted prices that the company offers to employees of its suppliers, or the dealer invoice price. GM is also advertising more than $7,000 off of its double-cab V-6 All Star model.

Bottom line
It's clear that while the race has been close in the long run, Ford has the decisive advantage over GM's combined truck sales lately. When you consider ATP, growing market share, and the potential shakeup from Ford's next-generation F-150 which could take a leap in fuel economy -- it appears Ford will only be adding to its lead in the most profitable vehicle segment in America.