These states are going to pinch your pocketbook if you're a smoker. Find out whether these high taxes actually curb tobacco consumption and what that could mean for your investments in the tobacco sector.

It may seem like the only war being fought in this country is against illegal drugs, but make no mistake about it: The Centers for Disease Control and Prevention and a number of states are waging war against tobacco products.

It wasn't but 50 years ago that then-Surgeon General Luther Terry delivered his report first linking cigarettes with chronic, debilitating, and deadly diseases such as heart disease and lung cancer. With 50 years having lapsed, the knowledge of the negative effects of tobacco products has only increased, allowing the CDC and other anti-smoking organizations the ability to improve smoking facts awareness among our youth and curb the overall smoking rate.

Since that report adult smoking rates have been cut by more than 50%, falling from around 42% in 1965 to just 18% of the population as of 2011. The CDC itself has a lofty goal of reducing smoking rates to just 12% of the adult population by 2020, but that may prove to be too utopian of a goal.

The war on Big Tobacco
One of the many ways the CDC has pushed the dangers of smoking awareness on American citizens is through anti-smoking campaigns. The CDC spent $54 million over a three-month period promoting the graphic dangers of smoking on TV, radio, print, billboards, and online media. It also marked the first time in its history it's paid money to networks to advertise against tobacco products.

The Food and Drug Administration has also joined in the fight against tobacco by requiring the tobacco industry to disclose the quantities of at least 20 harmful chemicals found in cigarettes. The FDA plans to release this data to the public in an effort to further improve awareness.

Many U.S. states have also banned smoking in restaurants and bars, with New York City taking it a couple of steps further and banning smoking (including e-cigarettes) in plazas, beaches, and other common open areas. Since the desire to smoke tends to increase in social situations, the hope from these regulating states is that these bans will reduce overall tobacco product consumption

Five states with the highest excise cigarette taxes
However, when all else fails one the best ways to nip cigarette smoking in the butt (play on words completely intended) that states are discovering is to tax the daylights out of tobacco products. Not only do higher taxes make it more painful on a smokers' pocketbook, but higher state excise taxes generate revenue that can be used to fund social projects as well as anti-smoking campaigns!

Clearly, not all states are as enthusiastic about taxing its smoking consumers as other states, because these states often rely on tobacco companies to employ thousands of workers in their state. Other states, however, are making it quite painful for existing smokers to keep up with their habit. Here are the five states according to the Tax Foundation (link opens a PDF; see Table 24) with the highest cigarette excise taxes:

There are a couple of things to keep in mind when taking into account the excise tax price per pack of these five states. One is that the national average excise tax according to the data from the Tax Foundation's data is $1.457 per pack, meaning these states are more than double, and, in New York's case, triple, the national average.

Secondly, these are merely state excise taxes. They don't include the federal excise tax of $1.0066 per pack or what can be exorbitant local taxes on cigarettes, which can vary from city to city. In other words, you can go ahead and add $1.01 to those excise taxes to get a cumulative excise tax cost per pack. Also keep in mind that excise taxes were just $0.39 as of 2009 and were proposed by President Obama in his original 2013 budget to rise to $1.95 per pack.

Finally, there's the actual wholesale cost that tobacco producers charge retailers to purchase their cigarettes, which gets marked up and passed along to the consumer. The end result is that a premium pack of Marlboro cigarettes can range from around $5 or perhaps even less in some of the nation's most tobacco-friendly excise tax states to as high as $15 per pack in New York City!

Do higher excise taxes make a difference?
I admit that many of my friends smoke, and most have noted that higher taxes wouldn't curb their habit. However, as my Foolish colleague Maxx Chatsko pointed out last June, varying studies from the New York Department of Health and the annual release of tobacco usage data from the surgeon general clearly demonstrate that higher taxes do curb tobacco consumption. 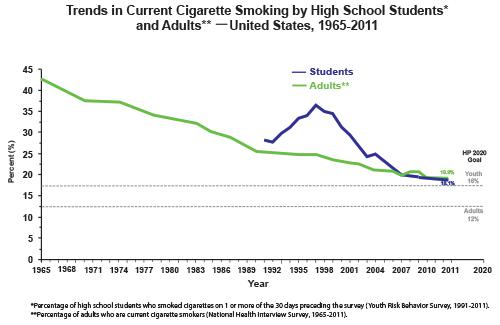 What does this mean for domestic tobacco producers? It likely means ongoing hardships and the need to boost wholesale pricing even higher if they hope to maintain consistent cash flow and the ability to attract investors with healthy dividends.

We've already witnessed steep jobs and cost cuts from America's largest tobacco producers, Altria (MO 1.32%) and Reynolds American (RAI). In 2011, Altria, the maker of Marlboro, announced that it'll be chopping 15% of its workforce to reduce expenses in the wake of declining tobacco shipments. Just a few months later in 2012, Reynolds American outlined plans to reduce its workforce by 10%.

Even Lorillard (LO.DL), whose market share has been increasingly steadily in the U.S. for more than a decade with its premium Newport brand, has relied heavily on price increases to do its dirty work with cigarette unit volume dipping 1.6% in its recently reported fourth-quarter results. Simply put, higher awareness of the effects of smoking, coupled with growing taxes, is turning people away from this vice.

Here's where big tobacco dollars are headed
I can certainly understand that the allure of the tobacco sector is huge for investors, because these stocks deliver premium dividends and generally steady cash flow because of the high pricing power and addictive nature of the product. But there's little denying that regulators and states are going to work hand-in-hand to make domestic producers' growth difficult.

If you insist on investing in the tobacco sector, you need to look overseas to a company like Philip Morris International (PM 1.80%), which is hitting all of the major tobacco growth zones, such as China and India. According to data from the World Bank, between 2004 and 2008, 51% of adult males in China were smokers, while 26% of adult males in India smoked. Considering that both countries have given rise to a rapidly growing middle-class over the past decade, I'd be shocked if either number didn't grow significantly.

Another key point we shouldn't gloss over here is that Philip Morris provides its products to dozens of countries. This means that even if it does face tougher tobacco legislation in select territories, it's able to rely on high-growth regions like Asia to boost its bottom line.

It remains to be seen if President Obama will get another federal excise tax increase through during his presidency, but I'd have to believe that significant domestic tax increases are on their way sooner rather than later. With that being said, it could be time to give up the pipe dream of domestic Big Tobacco and start looking overseas for your best tobacco investing ideas.

The Motley Fool owns shares of Philip Morris International. We Fools don't all hold the same opinions, but we all believe that considering a diverse range of insights makes us better investors. The Motley Fool has a disclosure policy.