Please ensure Javascript is enabled for purposes of website accessibility
Log In Help Join The Motley Fool
Free Article Join Over 1 Million Premium Members And Get More In-Depth Stock Guidance and Research
By Rich Smith – Feb 16, 2014 at 9:00AM

And General Dynamics would love to help them out with that.

Tuesday was a happy day at the U.S. Coast Guard.

For years, the USCG has "made do" with a fleet of rusty medium-endurance cutters for many of its offshore operations. The average age of ships in this fleet is 46 years. But now, efforts are under way to replace and upgrade this fleet with a new class of patrol vessel, the Offshore Patrol Cutter, or OPC. 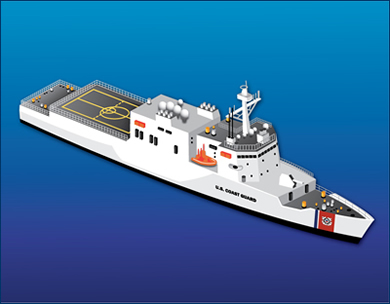 Tuesday marked the first step in building the Coast Guard's new fleet, as USCG tapped three companies -- General Dynamics' (GD 0.29%) Bath Iron Works, Bollinger Shipyards Lockport, and Eastern Shipbuilding Group -- to draw up proposals for building a fleet of as many as 25 new OPCs. Each firm will receive roughly $21 million for its design work in an initial "phase 1" of the project. Eighteen months from now, the Coast Guard will review these designs and pick one firm to proceed to phase 2 -- preparing detailed designs and building the first run of nine to 11 vessels.

So far, one company has already been eliminated from this competition. Huntington Ingalls (HII -0.39%), which did not make the cut for phase 1 of the project, lamented the Coast Guard's decision, noting that "our proposal offered commonality in many systems and construction processes already proven in the National Security Cutter program." That may have been part of Huntington's problem, given the raft of construction delays, cost overruns, and quality concerns that have been raised with the firm's NSC cutters.

What does it mean for investors?
If General Dynamics fails to win the contract 18 months from now, the OPC program will probably fall off investors' radar entirely -- the only other two firms competing being privately held. Still, for now investors can still hope that Huntington's loss will turn out to be General Dynamics' gain. According to Bloomberg, the 25 OPCs that the Coast Guard hopes to build could generate as much as $12 billion in revenues for General Dynamics' team, which includes partners L-3 Communications (LLL) and Spain's Navantia -- if they win it.

Granted, marine systems represents only General Dynamics' third most profitable division (out of four). The company currently makes a net profit margin of less than 10% on its shipbuilding operations. But in an era of declining defense spending, it's "any port in a storm." Even subpar profits are better than no profits at all.

Rich Smith has no position in any stocks mentioned. The Motley Fool owns shares of General Dynamics and L-3 Communications Holdings. We Fools don't all hold the same opinions, but we all believe that considering a diverse range of insights makes us better investors. The Motley Fool has a disclosure policy.