But few of us can invest in every single dividend-paying stock on the market, and even if we could, we're likely to find better gains by being selective. Today, two oil and gas services companies will square off in a head-to-head battle to determine which offers a better dividend for your portfolio.

Tale of the tape
Founded in 1919, Halliburton (NYSE:HAL) ranks among the world's largest suppliers of engineering and construction services for the oil industry. Headquartered in Houston, Halliburton serves the upstream oil and gas industry through two divisions: Drilling and Evaluation, and Completion and Production, which add up to more than 75,000 employees in over 80 countries around the world. In the early 1960's, Halliburton merged with Brown and Root to create a highly integrated oilfield services firm, but sold off much of these assets as part of a 2007 spinoff. Halliburton now maintains a second headquarters in Dubai to better expand its geographical presence in the Middle East and in the rest of the Eastern Hemisphere.

Founded in 1973, Transocean (NYSE:RIG) is one of the leading international providers of offshore drilling services for oil and gas wells. It specializes in deepwater drilling in the harsh environments of the Gulf of Mexico and the North Sea. Headquartered in Geneva, Switzerland, the company has a fleet of roughly 138 mobile offshore drilling units supported by more than 18,000 employees around the world. Over the past few years, Transocean augmented its business portfolio through the acquisition of Aker Drilling in 2011, but it has sold off stakes in both Challenger Minerals and Overseas Drilling. Both of our companies were affected by the deadly 2010 Deepwater Horizon oil spill in the Gulf of Mexico, but the specter of that disaster moves further behind them with each new successful and safe quarter.

Round one: endurance (dividend-paying streak)
According to Dividata, Halliburton began its quarterly dividend payments in 1982, but the company's dividend history can be traced back to 1947, equaling a 66-year long dividend-paying streak. Transocean has only been paying quarterly dividends since 1993, but since it ceased payments between 2003 and 2010 its streak is now only three years long. That makes this an easy win for Halliburton.

Round two: stability (dividend-raising streak)
Halliburton increased its payouts last year after holding dividends firm from 2007 to 2012. On the other hand, Transocean actually halted shareholder distributions for a quarter before resuming them at a reduced rate in 2013, which gives it no streak at all to brag about. 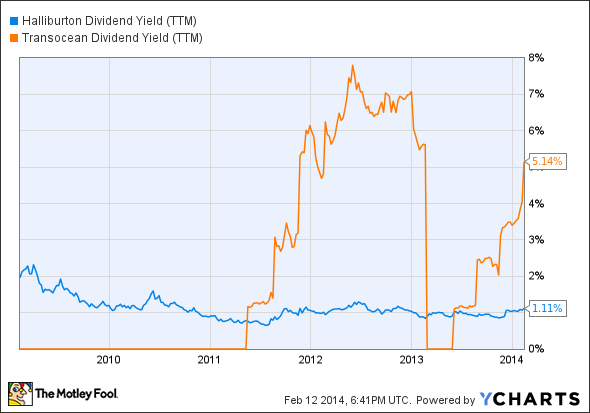 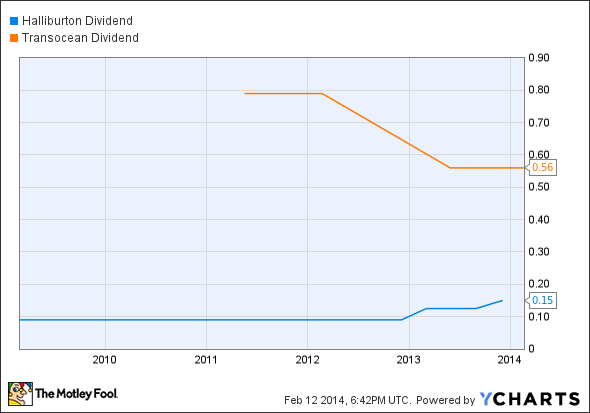 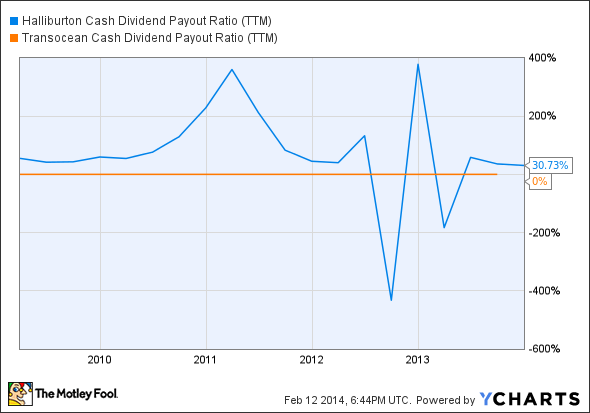 Winner: Halliburton, 4-1. (Transocean's true ratio is over 100%, according to Morningstar.)

Bonus round: opportunities and threats
Halliburton may have won the best-of-five on the basis of its history, but investors should never base their decisions on past performance alone. Tomorrow might bring a far different business environment, so it's important to also examine each company's potential, whether it happens to be nearly boundless or constrained too tightly for growth.

One dividend to rule them all
In this writer's humble opinion, it seems that Halliburton has a better shot at long-term outperformance, thanks to its multiple high-tech and lower-waste programs, most notably the Frac of the Future and its Nuverra-backed H2O Forward water-recycling initiative. The company is also likely to reap benefits from a stronger foothold in the booming Eagle Ford, Bakken shale, and the Gulf of Mexico. Transocean, on the other hand, has been struggling to replace its aging drillship fleet, which could offer a big opening for its competitors to dive through. Furthermore, dour predictions for the drilling market along with declining day rates for ultra-deepwater drilling units could create obstacles (at least for a while) to Transocean's sustainable revenue growth. You might disagree, and if so, you're encouraged to share your viewpoint in the comments below. No dividend is completely perfect, but some are bound to produce better results than others. Keep your eyes open -- you never know where you might find the next great dividend stock!