Will Apple be first in line for Taiwan Semiconductor's 20-nanometer manufacturing technology?

Taiwan Semiconductor (TSM -2.32%) has been rather vocal about the fact that it is now in "high volume manufacturing" of its 20-nanometer SoC process. The 20-nanometer process, according to TSMC, offers a 1.9x improvement in gate-density, 15% performance improvement at the same power or 30% lower power at the same performance compared to the company's 28-nanometer HPM process, and is expected to really begin to ramp in volume during the second half of 2014 and into 2015, as shown below.

Now, the interesting question to ask, then, is what Apple (AAPL -1.51%) likely plans to do with its next generation iPhone/iPad products later this year. Will it go with TSMC's 20-nanometer process for its "A8" system-on-chip? Will Apple be the first in line for Qualcomm's (QCOM -2.50%) very first 20-nanometer MDM9x35 modems?

There's no doubt about it – 20 nanometers will be more expensive
According to TSMC, fabless semiconductor design houses, and industry experts, the cost per transistor at the 20-nanometer node will actually increase slightly over that of the 28-nanometer node. 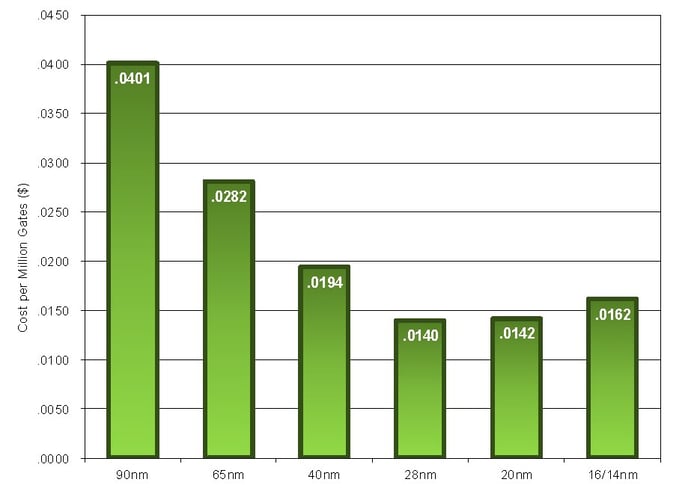 As far as Apple is concerned, if it were to be the lead customer on 20-nanometers and if it were to be the lead customer of Qualcomm's MDM9x35 LTE-Advanced Category 6 modem (built on 20-nanometer), then it would almost certainly take a gross-margin hit as the silicon dollar content in its phones would simply be higher (and it's not clear if Apple will raise prices). So, does Apple make its apps processor that much better and go with a state-of-the-art modem to boot? The former seems likely, but the latter – barring some serious pricing concessions on TSMC's or Qualcomm's part – seems less likely.

Apple likes its apps processor superiority, but it could go with cheaper modem alternatives
If TSMC is ready to go with 20-nanometer in high volume, it seems very likely that Apple will go ahead and launch the iPhone 6 with a next generation "A8" system-on-chip built on 20-nanometer. However, the modem question is much more subtle. Today, Apple uses Qualcomm's MDM9x15, which was state-of-the-art in 2011, but in 2013/2014 is quite behind the times. Apple will need to upgrade its modem.

The "obvious" choice would be to go with MDM9x25, which is an LTE-Advanced Category 4 (150Mbps) modem from Qualcomm. This will be a 28-nanometer, one-year-old part by the time the iPhone 6 launches, and allows Apple to claim LTE-Advanced, 150Mbps downloads, and so on. This will still end up paling compared to the MDM9x35 (300Mbps) and XMM 7260 modems from Qualcomm and Intel (INTC -2.27%), respectively, but it will be an upgrade from the current MDM9x15.

Another possibility is that since Intel is building its XMM 7260 on cheap 28-nanometer processes, and given how aggressively it is likely willing to price to win the "prized" Apple socket, Apple could end up using MDM9x35 in regions that require CDMA and then XMM 7260 in regions that don't require it. This would likely be significantly cheaper than using MDM9x35 across the board and it'd probably help Apple appear "cutting edge" specification wise.

Foolish bottom line
At the end of the day, it's tough to ignore that in TSMC's chart presented above that there is a significant ramp beginning in earnest during 2H 2014 and extending into 1H 2015 for its 20-nanometer process. This suggests that Apple – the most likely to be willing to be willing to pay for performance – is going to at least do a next generation apps processor on 20-nanometers and may also use a 20-nanometer modem from Qualcomm. Time will ultimately tell, though.