Please ensure Javascript is enabled for purposes of website accessibility
Log In Help Join The Motley Fool
Free Article Join Over 1 Million Premium Members And Get More In-Depth Stock Guidance and Research
By Rich Smith - Feb 16, 2014 at 10:00AM

A leaner, meaner -- and greener -- Lockheed Martin could be good news for its investors.

"When the going gets tough, the tough get going," or so they say. But where exactly do "they" go?

In the case of defense contractor Lockheed Martin Corporation (LMT 2.05%), it seems they go green.

As the world's biggest pure-play defense contractor, there's no doubt Lockheed Martin is a tough company. But lately, its business environment has been getting tougher as well. As defense budget cuts bit, Lockheed Martin announced plans to lay off 4,000 workers last November. By the time Q4 earnings results had rolled around, revenues were down 5%, and profits off 14% year over year.

Lockheed's response? CEO Marilyn Hewson promised to get leaner and more efficient, to cut costs, and to invest in "innovations." Chief among these innovations -- a company best known for the business of making killing machines is now developing a second specialty in renewable energy and other environmentally friendly technologies.

Lockheed goes "green"
In recent months, we've profiled several of Lockheed Martin's "green" innovations. For example, just last week, Lockheed announced it is partnering with Australia's Victorian Wave Partners to build a system of renewable-energy buoys, which will float off the shore of Victoria, generating electricity from the motion of the ocean's waves. Beginning as a pilot project of 2.5 megawatts, Lockheed hopes to build out its buoy fleet to the point where it's capable of powering 10,000 Australian homes with round-the-clock power -- 62.5 megawatts' worth of it. 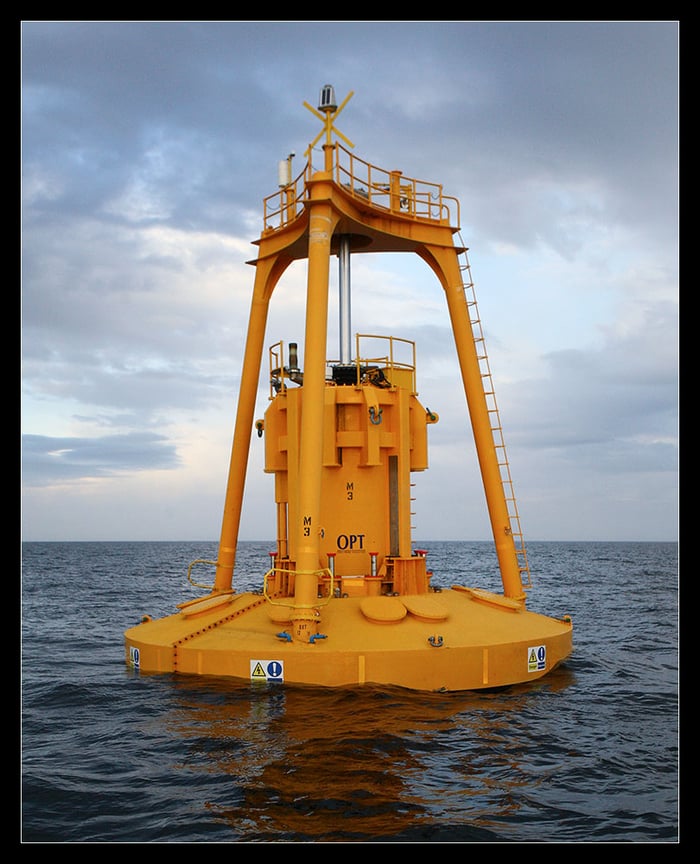 The new project is reminiscent of a similar idea, using different technology, that Lockheed is setting up off the shores of China. In April, Lockheed announced an alliance with China's Reignwood Group to develop an Ocean Thermal Energy Conversion project, or OTEC. It will utilize temperature differentials at various depths of the ocean to generate 10 megawatts of power for the mainland. Lockheed believes OTEC is scalable to as much as 100 megawatts per project -- enough electricity to power 16,000 homes.

Recent months have also seen Lockheed partner with the Tennessee Valley Authority to administer energy efficiency programs in the American Southeast, and tie up with Concorde Blue USA in a project to convert landfill waste to fuel gas for electricity production.

Lockheed's building an instrument suite for NASA and the National Oceanic and Atmospheric Administration to monitor the effects of "space weather" on the planet. And it's applying expertise gained in building fuel tanks for NASA rockets, to create a new business manufacturing storage and transport tanks for clean-burning natural gas.

That's not to mention the completely novel twist of taking what it's learned from developing radar-absorbing materials for stealth fighter jets, and parlaying that into a new nanotech technology for turning saltwater into clean drinking water "at a fraction of the cost of industry-standard reverse osmosis systems."

What it means to investors
It remains to be seen whether these new business lines of Lockheed's will pay off in the form of above-trend revenue growth or earnings. Lockheed does not break out such financial information for its greener projects. But already, the company is beginning to see a payoff.

Historically known primarily as a company in the "bad" business of manufacturing killing machines, Lockheed Martin has for the past three years won a place on the Carbon Disclosure Project's list of the top 500 companies working to mitigate the effects of global climate change. Last year, Lockheed was added to the 2013 Dow Jones Sustainability North America Index of leading companies working toward solutions to climate change and energy consumption.

These are more than just warm and fuzzy developments for Lockheed Martin -- mere trophies on the shelf. On the one hand, by burnishing its "green credentials," Lockheed is helping to make its stock more palatable to investors who might not ordinarily consider investing in a defense contractor. That helps to support the stock price by boosting demand for Lockheed stock. At the same time, by developing new businesses and new revenue streams, Lockheed Martin is helping to mitigate the risks of a sustained downturn in government funding for defense contractors.

That's one "green" development that all shareholders can get behind -- the greener the "LMT" stock ticker, the better: