Two government contractors square off in a battle of dividend fundamentals.

But few of us can invest in every single dividend-paying stock on the market, and even if we could, we're likely to find better gains by being selective. Today, two government contractors (one more diversified than the other) will square off in a head-to-head battle to determine which offers a better dividend for your portfolio.

Tale of the tape
Lockheed Martin (LMT 0.15%) is the world's largest military contractor, and was formed by the merger of two legendary aerospace companies -- Lockheed Corporation and Martin Marietta -- in 1995. Lockheed generates over 80% of its revenue from the federal government agency contracts, and the Department of Defense accounts for nearly 60% of revenue. Headquartered in Bethesda, Md., the company employs around 115,000 people worldwide, serving both domestic and foreign government entities, as well as private clients. The company has continued to expand its business portfolio through notable acquisitions, including Loral Company in 1996 and Amor Group in 2013.

Established in 1906, Honeywell International (HON -1.06%) is a diversified technology and manufacturing leader, and it ranks among the Fortune 100 companies. Headquartered in Morristown, New Jersey, Honeywell has a global workforce of more than 132,000 employees, serving private consumers, major corporations, and governments through four key operating areas: aerospace, performance materials, transportation systems, and automation and control solutions. Honeywell has also beefed up its business portfolio through acquisitions, notably of Dimensions International in 2007 and RAE Systems and Intermec in 2013.

Round one: endurance (dividend-paying streak)
According to Dividata, Lockheed Martin's been paying successive quarterly dividends since 1984 after the original Lockheed Corporation suspended dividends from 1969 until the early 1980's. That might be good for a win against a younger opponent, but the world's largest defense contractor comes short of Honeywell's legacy, as it's paid dividends every year since 1887 for an astounding 13-decade legacy of shareholder returns.

Round two: stability (dividend-raising streak)
According to Dividata, Lockheed has increased shareholder payouts at least once every year since 2003, which works out out to a 10-year long dividend-raising streak. By contrast, Honeywell avoided boosting payouts in 2010 after the financial crisis and hence can boast only three years of dividend increases. This one's an easy win for Lockheed. 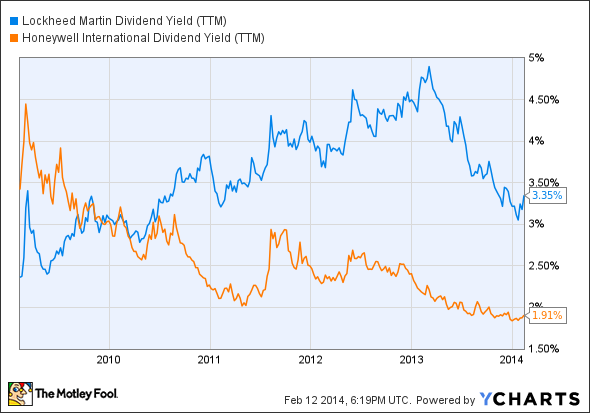 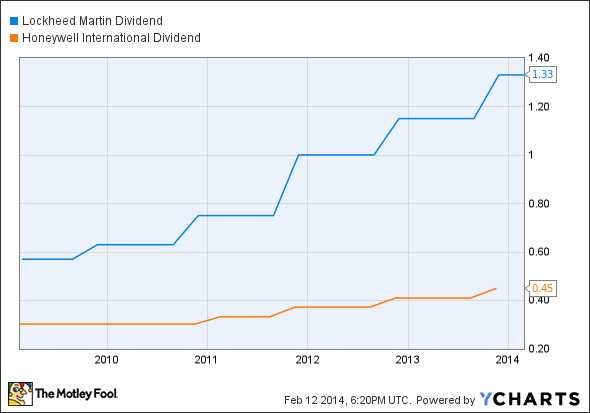 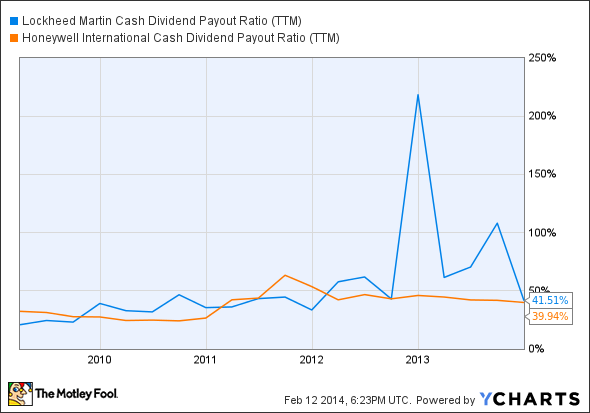 Bonus round: opportunities and threats
Lockheed may have narrowly won the best-of-five on the basis of its history, but investors should never base their decisions on past performance alone. Tomorrow might bring a far different business environment, so it's important to also examine each company's potential, whether it happens to be nearly boundless or constrained too tightly for growth.

One dividend to rule them all
In this writer's humble opinion, it seems that Lockheed Martin has a better shot -- though not by much -- at long-term outperformance, thanks to its steady stream of defense orders from domestic and foreign governments. The company could also benefit from its increasing work with UAVs, which should help it capture market share in the fast-growing global UAV market. Honeywell has also bagged a number of contracts from the Department of Defense, but it has a lot riding on the growth of the turbocharger market and on adoption of programmable thermostats. You might disagree, and if so, you're encouraged to share your viewpoint in the comments below. No dividend is completely perfect, but some are bound to produce better results than others. Keep your eyes open -- you never know where you might find the next great dividend stock!

Alex Planes has no position in any stocks mentioned. The Motley Fool recommends AeroVironment and Cummins and owns shares of Cummins, Lockheed Martin, and Northrop Grumman. Try any of our Foolish newsletter services free for 30 days. We Fools don't all hold the same opinions, but we all believe that considering a diverse range of insights makes us better investors. The Motley Fool has a disclosure policy.