If America's 50 states were independent, each would be as big as a nation-state.

America is a big place, but sometimes we forget just how big it is.

Aside from the U.S., only 14 countries in the world boast economies with gross domestic product in excess of $1 trillion. California's economy alone is bigger than seven of them, boasting a $2 trillion GDP that's roughly equal to (actually a bit bigger than) that of the Russian Federation, which is currently hosting the Olympics. Only seven independent nation-states have economies bigger than California's -- Italy, the U.K., Brazil, France, Germany, Japan, and China, in that order.

Intrigued by data like this, provided by U.S. Department of Commerce and the International Monetary Fund, we thought it would be fun to put together a map of the rest of the U.S., and show which states are comparable to which countries in terms of GDP. So if your state was a country, which country would it be? Find out below. 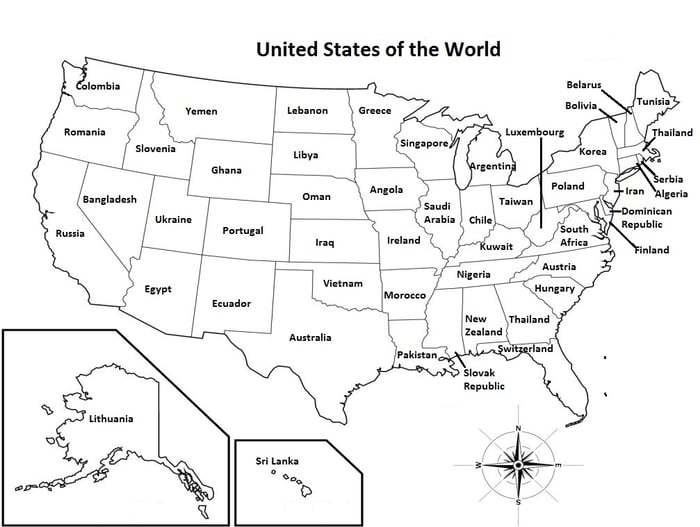 Source: Author's own work, based on 2012 data from U.S. DoC Bureau of Economic Analysis and the IMF.

In addition to investing, Rich Smith likes maps, and he likes traveling, but he's only visited six of the actual countries on this map. The Motley Fool recommends and owns shares of Berkshire Hathaway, We Fools don't all hold the same opinions, but we all believe that considering a diverse range of insights makes us better investors. The Motley Fool has a disclosure policy.

These 2 Stocks Were Monday's Key Movers

5 Money Managing Tips You Should Know, According to Artificial Intelligence

Why Does Alphabet (Google) Have 2 Different Ticker Symbols?
376%