Please ensure Javascript is enabled for purposes of website accessibility
Log In Help Join The Motley Fool
Free Article Join Over 1 Million Premium Members And Get More In-Depth Stock Guidance and Research
By Adam Levy – Feb 17, 2014 at 9:00AM

While Gru has been touted as a scheming evil genius, some might say Comcast is following in his footsteps. Here's what the company might have in the works to control your living room.

Ask Comcast's (CMCSA -0.09%) customers, they'll tell you it's evil. Yet, the company is beating back the competition and it's finally starting to grow its video subscriber count again.

While the company's customer service practices may render it evil, the company proved this week that it is an evil genius. First, it announced a deal with Time Warner Cable (NYSE: TWC) that will expand its territory, pending approval. Second, it's reportedly in talks with its subsidiary NBCUniversal to license the pay-TV window rights to Despicable Me 2 which will put Comcast in closer competition with Netflix (NFLX 2.99%).

On paper, the first news article looks especially evil, but it's this second story that I find absolutely genius. 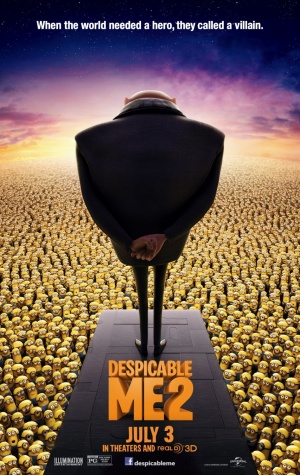 Step 1: Expand territory
Comcast announced on Thursday that it had agreed with Time Warner to buy out the company for $45.2 billion in Comcast stock. Technically, it's a merger, but Comcast will completely take over Time Warner's operations.

The move appears to be more of a land grab, as Comcast has already stated that it's willing to divest three million subscribers in order to gain FCC and antitrust regulatory approval. The two companies don't have overlapping territories at all, so the deal will give Comcast access to a significantly larger market.

The FCC tried to protect the cable industry against monopolies by imposing a 30% market share limit for any one company. Although the rule has been struck down in court twice, Comcast is willing to play by this rule in order to gain approval for the merger. It's smart for the company to do so. The company can pawn off its least-profitable subscribers while focusing on higher-end customers to continue growing its profits.

Of course, keeping those extra subscribers would be ideal. However, Comcast is focusing on attracting high-end customers who are willing to pay a premium for a premium service, as we'll see in step 2.

Step 2: Make a better product
One free On-Demand movie isn't going to change anything, but if Comcast starts licensing content like Netflix does, the company will likely attract more subscribers and deter cord-cutting. I've written in the past about how Comcast should expand on its VOD platform instead of partnering with Netflix, and it looks like the company is taking small steps to do so.

Netflix is more often viewed as a complement to cable than a replacement. The rapid growth in Netflix subscribers has not come at a large expense to pay-TV subscribers. So it makes sense that a cable provider that has its own Netflix alternative bundled-in stands to gain from the service. Netflix, conversely, could see a decline in subscribers who also subscribe to Comcast.

Comcast could charge a premium for its service, especially if the 30% market share rule is enforced. With a limited supply and a superior product, Comcast's pricing power will increase.

Not only will Comcast have a larger addressable market that will pay higher prices, it can lock out Netflix and other streaming providers from content like Despicable Me 2. This is the kind of content Netflix loves: children's content is among its most popular, it's a high-profile film that took in a good haul at the box-office, and it has replay value.

If a film like that is not available on Netflix or other streaming services, and customers are unable or unwilling to pay for Comcast's video service, it will spur DVD sales. Physical media sales have suffered at the hands of digital-download and streaming services. DVD and Blu-Ray revenue declined by 9% in 2013.

So, Comcast doubly benefits from one purchase. First, its beefed-up VOD service will attract high-paying customers. Second, an increase in DVD sales of NBCUniversal movies will go straight to Comcast. Evil ... Genius.

"Just because everybody hates it doesn't mean it's not good"
Comcast spends a lot of money and time to develop its pay-TV service. Its X1 and X2 platforms are arguably the best in the industry. A high-quality free On Demand selection should attract subscribers as the company expands its territory.

Comcast may continually raise its rates, but at least it has good reasons for doing so.

Adam Levy has no position in any stocks mentioned. The Motley Fool recommends Netflix. The Motley Fool owns shares of Netflix. We Fools may not all hold the same opinions, but we all believe that considering a diverse range of insights makes us better investors. The Motley Fool has a disclosure policy.