After George Soros exited J.C. Penney, it is perfectly rational for investors to wonder about the company's potential demise. But is the retailer's situation all that bad, or is the party just getting started?

Just when things started looking up for J.C. Penney (JCPN.Q), more bad news hit the fan. On Feb. 14, news broke that George Soros' hedge fund, Soros Fund Management, had sold its entire J.C. Penney holding in the fourth quarter of 2013. Although some shareholders may feel relieved that such a big player is out of the picture, the idea that Soros sold the entire stake in such a short period of time may mean that the end for the $1.9 billion retailer is nigh.

The primary driver behind the revenue drop was Johnson's decision to change the company's business. Believing that coupons were the shopper's equivalent of drugs, he axed the practice and instead offered everyday low prices. Instead of boosting sales, however, the practice only served to disenfranchise the company's customer base.

As a result of decreased sales, J.C. Penney's losses continued to mount. During Johnson's tenure, the retailer saw its net loss widen from $152 million to $985 million. In fact, the losses in its 2012 fiscal year were so bad that they brought the company's four-year average net profit margin down to -1.2%. Even after Johnson was ousted by the board and coupons were reinstated, the company continued to face difficulties. In the first three quarters of the year, it posted a loss of $1.4 billion.

It was this kind of trouble that convinced Bill Ackman, the founder of Pershing Square Capital Management, to sell his 39 million shares in the company to Citigroup at a 50% loss. Since then, shares continued their decline and big-name investors like David Tepper, Richard Perry, and Kyle Bass closed out their positions.

With Soros, previously the company's second-largest shareholder with nearly 20 million shares, out of the game, investors would be out of their minds not to be concerned about the company's future. Yes, last October the company reported that its comparable-store sales rose 0.9%, while its November comparable-store sales rose an additional 10.1%; but the exits of so many significant investors likely spells more trouble for the already troubled retailer.

What better opportunities might exist?
While it's possible that brick-and-mortar retailers are on their way out, Macy's and Nordstrom have been defying the odds. Over the past four years, Macy's has seen its revenue jump 18% from $23.5 billion to $27.7 billion. Although this may not seem impressive when placed next to a company like Groupon or LinkedIn, it's very strong when compared to retail rivals like J.C. Penney, Sears Holdings, or Aeropostale.

In terms of revenue, Nordstrom's performance has been even stronger. Over the same time frame, Nordstrom has managed to grow its top line by 41% from $8.6 billion to $12.1 billion. But, of course, revenue isn't all that matters when it comes to a business; the Foolish investor should look for a company that can grow its revenue as well as its net income.

Over the past four years, Nordstrom has grown its net income a strong 67% from $441 million to $735 million, resulting in its net profit margin averaging 6%. In addition to benefiting from rising sales, the company enjoyed a reduction in both its cost of goods sold and selling, general, and administrative expenses in relation to sales.

When it comes to profitability, though, the winner has been Macy's. During this time frame, the retailer effectively leveraged its rising revenue and implemented cost-cutting initiatives to reduce costs relative to sales. This combination of strategies has helped propel the bottom line 306% higher from $329 million to $1.3 billion, resulting in a four-year average net profit margin of 3.6%. Unfortunately, this falls short of Nordstrom's average net profit margin, but the company looks to be catching up. 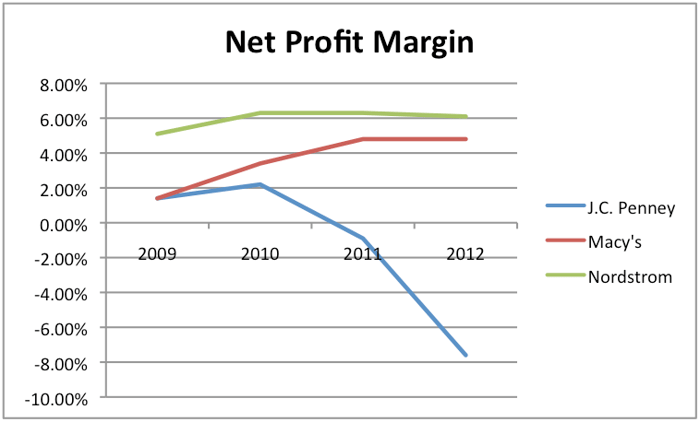 Foolish takeaway
Based on the data provided, it looks like J.C. Penney's situation is beginning to look dubious once again. For this reason alone, the Foolish investor should be cautious if they decide to initiate a stake in the company, as the decision to sell by major investors like Soros could signal worse times ahead.

Instead of taking the risk with J.C. Penney, the Foolish investor would be wise to consider an investment in either Macy's or Nordstrom. Both companies have done well these past few years, and they could, in the long run, prove to be strong opportunities...if they can maintain their course.