The Chinese government released a report in January which showed a declining rate of growth for the nation as a whole. The report included a decline in GDP growth in 2013, as well as a lowered Purchasing Managers Index, or PMI, which measures the rate of manufacturing growth in the economy. 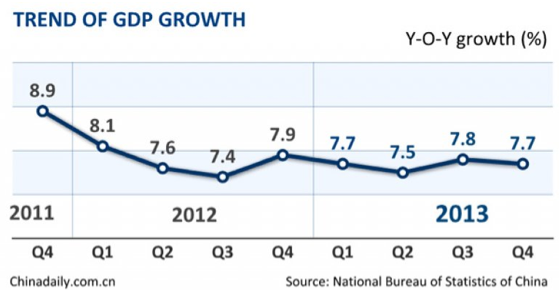 A JPMorgan analyst took this and ran with it to downgrade Macau gaming company MGM Resorts International (MGM -0.51%), which saw an immediate 2.4% drop in price. Las Vegas Sands (LVS 2.28%) dropped 1.9% based on the analysis that growth in Macau will slow.

MGM and Sands both hit 52-week highs in early January after the Chinese government reported a record $45 billion in gaming revenues from Macau in 2013, up 18.6% over the prior year. On this good news, MGM, Sands, and other gaming companies which earn most of their revenue from Macau all saw pops in their stock prices. These quick increases led the JPMorgan analyst to downgrade MGM from buy to hold, which caused a drop in the share price of MGM and the other big Macau casino companies. However, though the quick rises in early January because of the good year-end news from 2013 may have been excessive, which justifies small corrections, there is still plenty of reason to remain bullish that Macau and these casino stocks hold more long-term value and growth.

Bullish trends: better transportation, focus on mass-market gamers, and no new major casinos
Macau revenues grew by 18.6% in 2013, faster than China's overall GDP growth at 7.7%. While the total GDP growth in China was consistent with figures from year-end 2012, analysts expect that the growth will continue to slow in the next few years. However, after an amazing year of growth in the United States, one that finally eased investors' minds about coming out of the post-2008 recession, the U.S. 2013 GDP growth was a mere 1.9%. Compare this to the revenue growth in Macau of 18.6%. Even if the analyst's expectation of revenue growth in Macau dropping to 17% in 2014 is realized, that is still pretty amazing and certainly well above the growth rate of Las Vegas or any other developed gaming market.

Additionally, there are reasons to believe that better transportation in Macau will be a profit driver in 2014 and beyond. Increased travel and easier transportation could mean even more visitors to the island's casinos in 2014 and future years. Thanks to the development of a bridge between Hong Kong and Macau, potential gamers can get from Hong Kong to the casinos in 20 minutes by car, instead of taking a ferry or flying. Likewise, a rail system on the island will connect the separate parts of the city and it will include stops at certain gambling hot-spots. These transportation upgrades mean easier accessibility in less time, good reasons to believe they will help drive casino profits.

Another source of growth is likely to come from an increased focus on mass-market gamblers over high-end VIP consumers. Morgan Stanley estimates that in 2014, growth from mass-market gamblers will top 28% in Macau, compared to VIP-gamer growth of 13%. Wynn Resorts (WYNN 1.32%) showed this growth in its 2013 year-end financial results. The company's 2013 fourth-quarter profit increased by an astounding 92% year-over-year, led mainly by mass-market gaming growth in Macau. This segment of gamers in Macau increased by 35% while VIP gaming grew by 24%. Wynn is looking to continue this trend toward higher profits from the mass-market segment to continue its strong growth in 2014 and beyond.

Foolish conclusion -- plenty of bullish reasons to stay happy with Macau growth
The JPMorgan report showed that the analyst expects the revenue growth of the Macau gaming industry to drop to 17% this year. Who are these investors that snub their noses when growth of nearly 19% drops to 17%? That level of annual growth would still be amazing, especially compared to the other options investors have for playing their money. Macau's growth may slow over the coming years, but investors should not look past the revenue and profit growth that remain possible. Additionally, the bullish signs of better transportation and more mass-market gamers could mean another blow-out year for Macau. Don't take your bets off of the table yet.

Bradley Seth McNew has no position in any stocks mentioned. The Motley Fool owns shares of JPMorgan Chase. We Fools may not all hold the same opinions, but we all believe that considering a diverse range of insights makes us better investors. The Motley Fool has a disclosure policy.