The past few years have been a placid cruise compared to the storms of earlier days. What lessons can we learn from these wild moves?

Investors who got used to last year's tranquil rise might want to reset their expectations. After a month and a half of trading, the Dow Jones Industrial Average (^DJI -0.90%) has already made eight moves of 1% or more, in either direction. At the rate we're going, we'll experience 65 trading days like that for the full year, putting 2014 slightly ahead of the Dow's historical annual average for such days.

That doesn't mean we need to fear a meltdown, though. There have been a number of years throughout market history where the Dow nudged 1% higher day after day, to close with excellent returns for the full year. The real worry is that, instead of 1% days, we'll start having 10% days -- heart-stopping enough when they happen to individual stocks, but a momentous event when spread across the entire market. Let's take a look at the five days of Dow trading since 1896 that produced the largest single-day change in values. Maybe we can gain a better understanding of the events that set these moves in motion, and learn how to avoid them ahead of time. 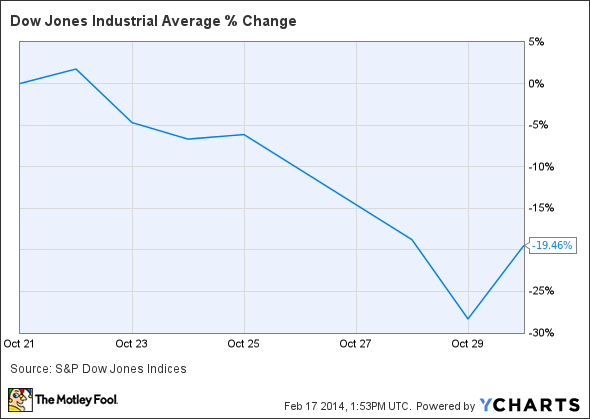 The end of October in 1929 remains the wildest week in Dow history, and it was capped off by a monster surge on Wednesday the 30th as traders rejoiced over the apparent "end" of the crash that had begun two days earlier. Even publicity-shy Standard Oil billionaire John D. Rockefeller got in on the action, telling the press that he had been feverishly buying stocks during the earlier declines. The market's pop can best be described as a short-term relief rally, as the feeling across much of Wall Street was that any crash would likely be short-lived. Of course, we know better now. But still, it's important to remember that any huge gains often come in response to huge losses, like those that began only two days earlier...

4: Oct. 28, 1929 (12.8% loss)
The Dow had to give investors a reason to gobble up shares on Oct. 30, and the horrific drop that took place two days earlier was good enough for many. This day, which was the original Black Monday on Wall Street until a more violent torrent of sales swept through the exchange (one you'll see later in this list), was blamed on overleveraged speculators and taken as a sign that the market would soon snap back. The $14 billion one-day loss of share value that hit the market on Black Monday remains the largest such loss in relation to the national GDP ever seen -- it was as though 15% of the value of America's economy blew up in one frenetic day.

Surprisingly, contemporary reports from this day show a remarkably calm array of journalists, politicians, and financial kingpins. In many respects, it would have been easy for them to overlook or miss the danger looming ahead for the markets, even after this selling stampede. Many economic indicators remained positive at the time, and extreme leverage, far from being demonized, was touted as a clever financial innovation that could help the little guy get rich without spending like a big guy. It wasn't until much later that everyone realized how fragile Wall Street really was. In our era of constantly updated economic and financial information (quarterly financial disclosures wouldn't be required until the Roosevelt Administration created the SEC), this sort of blithe ignorance in the face of a massive crash seems far less likely.

3: Oct. 6, 1931 (14.9% gain)
By late 1931, the blithe optimism Wall Street had favored in the face of 1929's crash had given way to a sense of grinding frustration. The Dow had by this point lost three-quarters of its value since peaking in 1929, with the double-digit percentage moves of that year giving way to day after day of down, down, down. By 1931, investors were sick of it, so any positive news might have sparked a surge. The news on this day was fairly straightforward, and would be familiar to anyone who experienced our latest financial crisis. In a nutshell, President Herbert Hoover tried to bail out the banking system. This plan appears surprisingly similar to the Troubled Asset Relief Program passed in 2008 -- and like TARP, Hoover's efforts weren't enough to stop the Dow from resuming its downward slide soon afterwards. 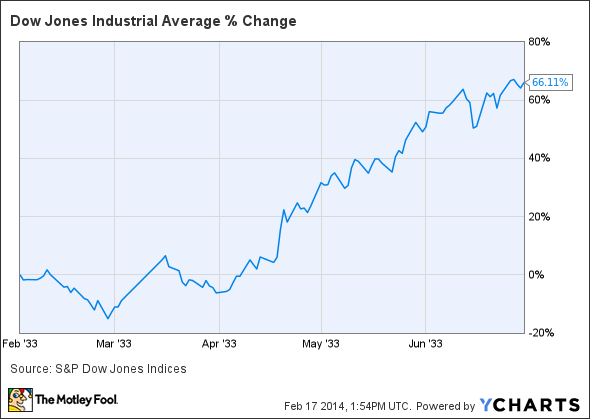 This remains the largest one-day surge in Dow history, and its cause is just as unique: this was the day that newly inaugurated President Franklin D. Roosevelt ended the national banking holiday he had implemented less than a day after taking the oath of office. For the two weeks that America's banks kept their doors closed, the Roosevelt Administration worked feverishly to shore up America's fragile financial system with some truly groundbreaking efforts. Between his inauguration and the end of the banking holiday, Roosevelt took the United States off the gold standard and simultaneously devalued the dollar by initiating a large printing run at the Federal Reserve.

The markets responded joyously to these changes, and this day marks the clearest sign of revival in the Dow since 1929. The Dow's value doubled in the four months after Roosevelt's banking holiday began, and never again reached the lows it had touched before he took office. If there's a lesson here, it might be that the markets respond better to new ideas than they do to efforts that only prop up old ones. 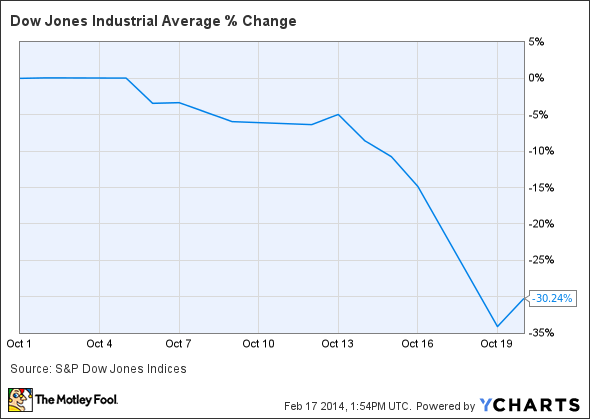 The collapse that took place in 1987 remains unique in market history for its ferocity and for the confusion it caused. To this day, there is no consensus on the true cause of this massive drop, although newly implemented computerized trading systems remain a major target of blame -- particularly now that high-frequency trading has become so widespread on the market. Since the Dow quickly shrugged off the drop (it enjoyed two massive pops in the days that followed and returned to pre-crash levels by 1989), its long-term impact has turned out to be far more important than its immediate effect.

The panic that erupted during and after this crash led to sweeping changes in policy for both the markets and for the Federal Reserve, which had recently installed Alan Greenspan as its Chairman. Circuit breakers were installed to prevent marketwide collapses of this nature, and Greenspan promised that liquidity would be accessible for the stressed markets, creating what's now known as the "Greenspan put." With implicit government support and a promise that devastating drops would be stopped in their tracks, the Dow set off on one of the greatest bull-market surges in its history.

Could these sorts of days return? It's likely -- the Dow experienced two days of double-digit gains during the tumult of 2008 -- but this sort of action tends to happen only in the heat of a financial panic, with rather rare exceptions. But what would you do if it happened? The immediate public response to a major move, as we've already seen, often tends to be the wrong one over the long term.