Weight Watchers (WW -7.63%) reported fourth-quarter and full-year earnings last Thursday evening and its shares fell nearly 20% after hours. The quarter wasn't expected to deliver strong numbers because it covers the holiday season. However, the company's service-as-product model saw key metrics slipping while competitor Herbalife (HLF -0.66%) has pulled ahead. How can Weight Watchers fix its losing problem?

The company reported fourth-quarter revenue of $366.1 million, which beat the analyst consensus of $358 million but represented a year-over-year drop of 11%. The earnings per share of $0.54 that the company reported fell short of the forecast for $0.61. The outlook for 2014 doesn't inspire optimism, as Herbalife guided for EPS of $1.30-$1.60.

How bad was 2013 for Weight Watchers?

Membership continues to erode
Weight Watchers depends on member attendance and adherence for its livelihood because the service is the product. The company has very few tangible products to sell beyond some meal replacement bars and kitchen scales. Thus, it needs people to attend meetings and sign up for online subscriptions. 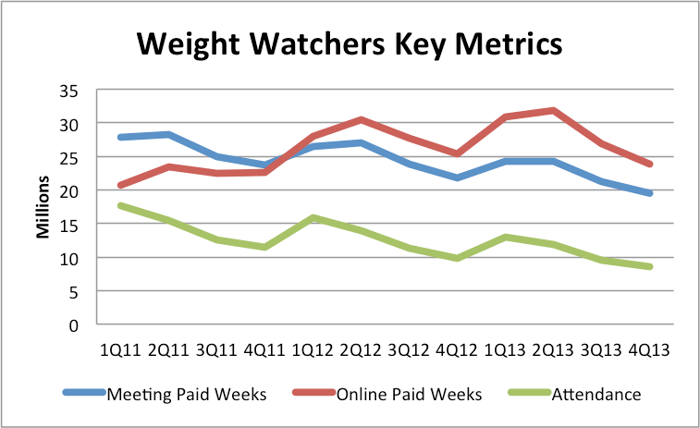 Attendance has lost the most steam since 2011, which has pulled down meeting-paid weeks. Online-paid weeks had a strong showing through 2012 and the first half of the next year before fading.

The most concerning part of this graph is that the first quarters -- also known as the post-holiday diet rush -- don't show significant spikes upward. So even short-term, resolution-inspired dieters aren't turning to Weight Watchers in large numbers.

How can Weight Watchers gain -- and keep -- members?
The company runs highly visible advertising campaigns with celebrity spokespeople, so i'ts not as if people forgot that Weight Watchers exists. For whatever reason, dieters seem to have steered away from the in-person meeting model.

That leaves the online plans as the most important focus. However, with the online-only plans costing $18.95 a month after a nearly $30 signup fee, Weight Watchers needs to convince customers that its service offers benefits not available from free calorie-counting sites and apps. The company needs to put forward the changes it's made to remain modern -- such as the mobile app that includes a barcode scanner for easy food tracking.

However, it's going to remain a tough sell as the diet market stays saturated.

Benefits of having products
Weight Watchers has a limited number of meal replacement products and kitchen accessories available at meetings and through its online operations. The branded frozen meals in the grocery store aisle were licensed out to H.J. Heinz of Berkshire Hathaway royalty-free after Weight Watchers was spun off from the company in 1999. These products are a revenue source for Heinz, not Weight Watchers.

Having more physical products for sale could benefit Weight Watchers. Competitor Herbalife posted third-quarter product volume growth of 13% with revenue and EPS at $1.2 billion and $1.41, respectively.  Herbalife sells nutritional products primarily focused around shakes that are sold through a multilevel-marketing model. The company is also the target of Bill Ackman's one-man war. Ackman considers Herbalife a pyramid scheme and has called for the government to shut the company down.

Herbalife will report fourth-quarter earnings on Feb. 18 and analysts expect $1.3 billion in revenue and EPS of $1.28.

Foolish final thoughts
Weight Watchers has a tough task in trying to sell a service that users can similarly reproduce for free. The online option has proven more successful in recent years and should serve as the company's focus in the future.

Is It Time to Take Profits on Weight Watchers?
370%