Will consistent negative headlines be the eventual downfall for Lululemon, or are these headlines actually a positive due to increased brand recognition? And how does Gap’s Athleta fit into the picture?

Lululemon athletica (LULU 0.17%) loves drama so much that it almost seems as though these stories are invented to create headlines. While that's a long shot, it's something for conspiracy theorists to discuss. In the meantime, everyone else can discuss one of the company's most recent drama-filled stories -- its stringent return policy -- and whether or not this is likely to have an impact on the company's potential.

Lululemon is the anti-Amazon.com when it comes to retailers. It puts profits ahead of customer service. For instance, Lululemon has a rule that you may not resell its products on eBay. If you choose to do so, then your IP address might be blocked from Lululemon's online store, disallowing you to make online purchases.

The general return policy for Lululemon is that you can only return unworn merchandise, and it must be within 14 days. If it's a gift, too bad. You still have to make the return within 14 days.

Lululemon doesn't want its merchandise to be sold at higher prices online. However, Lululemon might be missing the big picture here. If people are reselling its merchandise for a premium online, then demand for its products would increase due to resale value. Furthermore, by implementing such a stringent policy, it's going to lead to unhappy customers who might have been pleased earlier. Goodbye, loyal customers. This exclusory policy is likely to do more harm than good. For instance, take a look at another recent exclusory policy implemented by another retailer.

In early 2013, news broke that Abercrombie & Fitch (ANF -0.88%) CEO, Michael Jeffries, had made a statement about only wanting to sell to cool, thin kids seven years earlier. Despite the elapsed time, this news went viral on social media sites and everywhere else on the Internet for that matter. If you're wondering whether or not it truly had an effect on sales, take a close look at the revenue chart below: 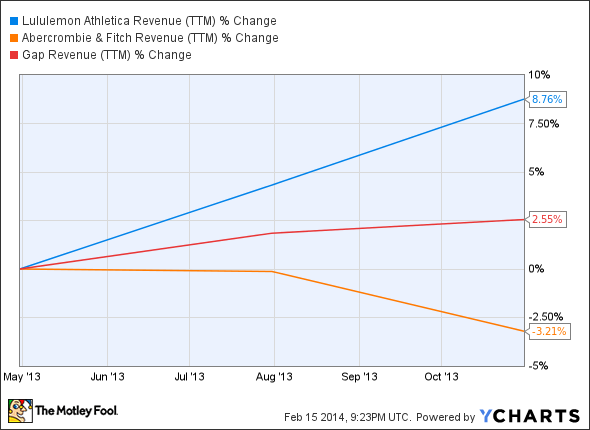 The answer is "yes," it did impact sales. As a teen retailer in a world where teens are more likely to spend their limited discretionary capital on technology than attire, this wasn't a hit Abercrombie & Fitch could afford. It's possible that Abercrombie & Fitch will recover thanks to its fiscally sound position: $234.69 million in operational cash flow generation over the past year to complement a debt-to-equity ratio of just 0.1.

The competition's return policy
You might have noticed Gap (GPS 0.68%) in the revenue chart above. Recent top-line growth hasn't been as strong as Lululemon's, but that's expected since it's a more mature company. Gap recently launched Athleta: "The ultimate performance apparel for women." Yoga plays a big role. It's no secret that Gap launched the brand because it saw the success of Lululemon and thought it could enter the market and outperform its new rival.

It's too early to tell which brand will win, but Athleta is likely to win for customer service. For example, you can return any Athleta merchandise anytime. This includes online orders.

Recent performance
Early in January, Lululemon announced that it expects fourth-quarter comps in the low- to mid-single digits versus a prior expectation of flat, citing decelerating sales trends in January. At the same time, the company noted that investments in back-of-the-house product operations are beginning to pay off.

Gap's fourth-quarter comps increased 1%, which was the eight consecutive quarter of comps growth. However, while its namesake brand saw comps growth of 1%, Old Navy came in flat, and Banana Republic declined 3%.

This makes an investment decision difficult, yet not impossible. Gap might not be growing as quickly, but it offers diversification; and it's trading at just 14 times earnings while offering a 1.9% dividend yield.

The Foolish bottom line
Despite all the drama surrounding Lululemon, it still manages to grow. This has a lot to do with its loyal following and the culture it establishes with its customers -- at least those who follow its rules. However, with lowered comps expectations and Gap's Athleta attempting to steal market share, this is far from a hands-down winner. It's a company that should be explored by traders and gamblers. Those bets might pay off, possibly even in a big way, but Foolish investors can find better long-term growth opportunities with less risk. Please do your own research prior to making any investment decisions.

Dan Moskowitz has no position in any stocks mentioned. The Motley Fool recommends Lululemon Athletica. We Fools may not all hold the same opinions, but we all believe that considering a diverse range of insights makes us better investors. The Motley Fool has a disclosure policy.