And there are signs that we might never move out.

Years after the recession, you might think things are returning to normal. With the Dow Jones Industrial Average (^DJI 0.58%)blasting past its 2007 highs last year, unemployment reaching a five-year low of 6.6%, and Jay Leno again passing the reins of the Tonight Show, a lot of things are back on track.

However, a prediction that billionaire investor Warren Buffett made more than two years ago is not proving true. More of us still live at home with our parents as of this month:

This follows the recent upward trend: 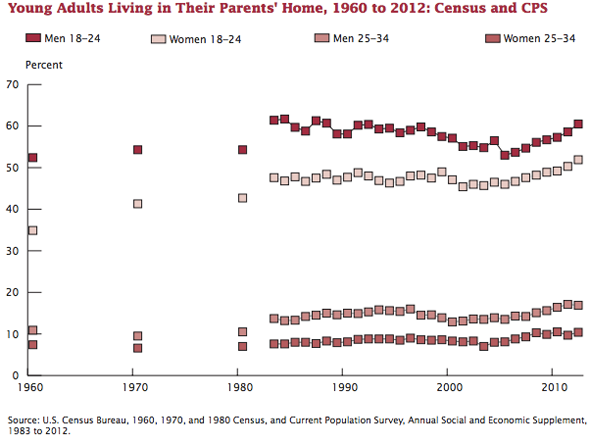 Buffett's prediction
Buffett wrote in his 2011 letter to shareholders: "People may postpone hitching up during uncertain times, but eventually hormones take over. And while 'doubling-up' may be the initial reaction of some during a recession, living with in-laws can quickly lose its allure." Apparently, Buffett's reliance on hormones overlooked the fact that teenagers get along OK when living with their parents, and those cohabitation skills may carry well into their 20s and early 30s.

This lack of household formation concerns Buffett because of Berkshire Hathaway's (BRK.B 0.73%) housing-related businesses: Clayton Homes, Acme Brick, Shaw, Johns Manville, and MiTek. In the 2012 fiscal year, Clayton Homes' revenue increased just 3%, while the year prior it dipped 17%. For the first nine months of this fiscal year, Clayton's revenue is up 84% compared to last year; however, this owes to lower loan loss provisions and increased interest income -- home sales have only increased 9%. 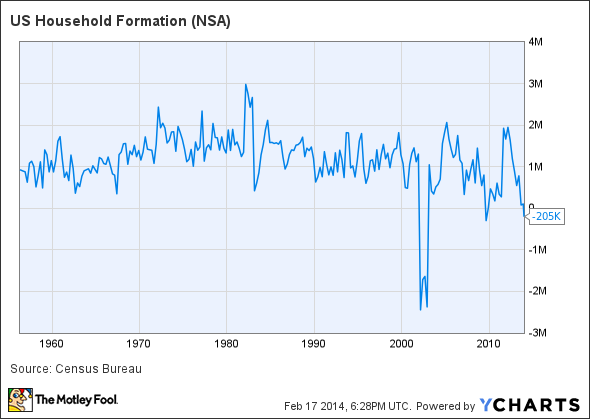 US Household Formation data by YCharts.

Typically, about 1 million households are created each year. Since the recession, however, yearly household formation has trended down to about 500,000 annually. Due to the difference between expected and actual, Trulia (NYSE: TRLA) puts the number of "missing" households at 2.4 million.

Because of these missing households, Buffett and many others say there is a pent-up demand in the housing market. The problem is that this pent-up demand may never be let loose for a variety of reasons, and the record number of Americans living at home is one sign that we're not leaving the nest anytime soon.

One reason is that a recession hurts wages for years afterward. One Yale study put wage losses from those who graduate during a recession at 1% to 13% per year, which, over 20 years, amounted to $80,000. Given the time value of money, reduced savings today have a ripple effect for the rest of one's life. And that missing chunk of income hinders our ability to say goodbye to mom and dad.

Another reason is that cultural norms are changing. Marriage rates are at the lowest in more than a century, while the average age of first marriage is at a century-plus high. Those who witnessed the destruction of property values might balk at investing a large part of their wealth in such an inflexible investment. And it seems that flexibility of ownership is the new trend, with a new generation using car sharing instead of leasing vehicles, renting airbeds instead of hotel rooms, and subscribing to media libraries instead of buying DVDs or Blu-ray discs.

Get comfy
While the economy would obviously benefit from more households and fewer adult basement-dwellers, we may not have the income and shame to push us out of our parents' homes. Household formation could well revert to the mean, but those "missing" households may never be found. While it's a grim thought, your parents' homes must be passed on to someone.