The Pacific Northwest is home to 35% of the United States' hydroelectric power, but according to the EIA rainfall there is 70% below normal—this shows why renewable power can't replace more controllable energy sources.

The West Coast is in the middle of a dry spell that will have big implications for its power markets. The drought shows exactly why renewable power will have such a hard time replacing controllable, but dirty, energy sources.

An oldie with issues
Water has been used for thousands of years in applications from milling grain to mining. It was one of the first large-scale renewable energy sources, with hydroelectric power plants like the famous Hoover Dam and the giant Grand Coulee Dam helping to light the nation.

But, according to the Energy Information Administration (EIA), rainfall in the Pacific Northwest is 70% below normal. That's a big problem, the region is home to more than a third of this country's hydroelectric power. California is facing a similar predicament, with 60% of the state in severe drought conditions. California accounts for 14% of the country's hydroelectric capacity. 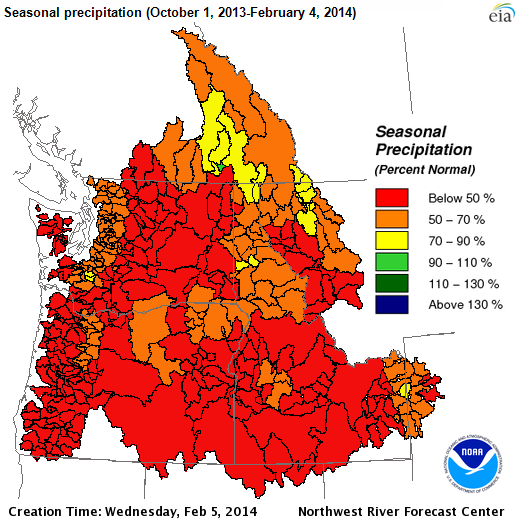 The problem and solution
The West Coast's reliance on hydroelectric power shows the problem with this and all non-controllable power sources. Hydroelectric power has varied from 11% to 28% of supply in California and peaks in the spring. In other words, hydro is unreliable and doesn't match up well with heightened summer demand. That's why hydro has to be paired with controllable power, like coal, natural gas, and nuclear. The same thing has to happen with solar and wind.

Dirty, but useful
Xcel is a perfect example of why U.S. utilities will remain reliant on coal miners like Cloud Peak Energy (CLD) and Alliance Resource Partners (ARLP -1.57%). Cloud Peak operates exclusively out of the Powder River Basin (PRB), with Alliance working largely out of the Illinois Basin (ILB). These are the two lowest cost coal regions in the country.

The PRB has seen spot prices pick up as much as 40% as low utility stockpiles appear to be leading to increased demand. The ILB, meanwhile, actually grew production 5% last year, one of the worst on record for coal. Moreover, while competitors have been bleeding red ink, Cloud Peak and Alliance have remained solidly profitable.

Cameco (CCJ -0.78%) is the largest publicly traded uranium miner. Although uranium is also in the doldrums, the market is going through changes that will lead to reduced supply at the exact moment when demand starts to rise in developing nations like China and India. When the uranium markets goes from supply driven to demand driven, Cameco will be in prime position to benefit. It's already working on increasing its uranium production by over 60% by 2018.

Natural gas is dealing with low prices that are likely to stick around for awhile. That will make pipeline companies a better option, with giants like Kinder Morgan (KMI -1.80%) setting up to be key players in the space. Kinder Morgan recently noted the gas-reliant, but supply constrained Northeast as a potential growth market for pipelines—an issue highlighted by the gas price spike caused by the region's recent cold weather.

Kinder Morgan already serves the market and is starting discussions with customers to increase its footprint. Another name to watch in the space is Spectra Energy Partners (SEP), which already has shovels in the ground as it looks to expand its footprint in the region.

There is definitely a move toward renewable power sources, but hydroelectric has been around for ages and could never replace "dirtier" options. Solar and wind will face the same problems. Look for dirty fuel players like Cloud Peak, Alliance, Cameco, Kinder Morgan, and Spectra to do well even as renewables expand their footprint.

Growth looks promising with these companies, but don't forget these 6