New orders slow to a standstill, but future expectations offer some hope ahead.

New York manufacturing growth slowed down for February, according to a new report released today by the New York Federal Reserve.

Comprised of surveys from around 100 New York executives, The Empire State Manufacturing Survey attempts to determine whether certain components of manufacturing have experienced growth (positive number) or contraction (negative number). Investors watch New York manufacturing (and other regions, as well) as a possible signal of larger economic upswings or downturns.

For February, the survey's general business conditions index clocked in at 4.5 points, down from January's 12.5 reading. Analysts had expected a stronger reading of 8.5. 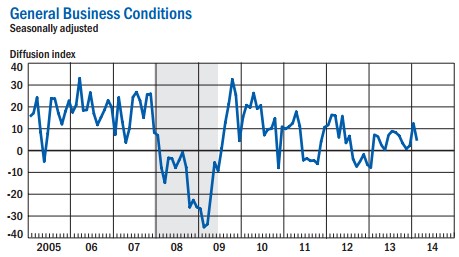 Digging deeper, new orders growth slowed to a standstill at around zero, a sign that could mean tougher times ahead for New York manufacturing. Shipments took a major 13-point dip but stayed positive at 2, while unfilled orders shrank another two points to hit -6.3.

But although current conditions look crummy, manufacturers' six-month outlook remains upbeat. The overall index improved 1.5 points to 39, while new orders added on six points to clock in at 45. Delivery time and inventories both went from red to black in the latest report.

With today's report pointing to uninspiring current conditions, analysts will be keeping a close watch on Thursday's Philadelphia Federal Reserve report for any larger signs of trouble.

These 2 Stocks Could Make or Break the Market This Week

Apple Falls on China Fears, but This Nasdaq Stock Is Soaring Monday
356%