LINN Energy LLC is hiding value from investors, and this deal is one more sign that it’s true.

I think that LINN Energy LLC (LINEQ) and, by association, LinnCo LLC (NASDAQ: LNCO) are hiding something big. And that's a good thing. Because that means investors still have a chance to invest in either company before the big reveal.

The big secret
So, what is LINN Energy hiding? The remarkable untapped value of its horizontal acreage in Texas' Permian Basin. The company believes that it holds about 60,000 net acres that have horizontal potential for the Wolfcamp formation. It currently estimates that it could drill around 675 horizontal locations on its acreage with additional potential from non-operated wells like the one it's currently participating with Diamondback Energy Inc (FANG 0.53%) to drill. The following slide gives a fairly good overview of LINN Energy's position in this emerging play. 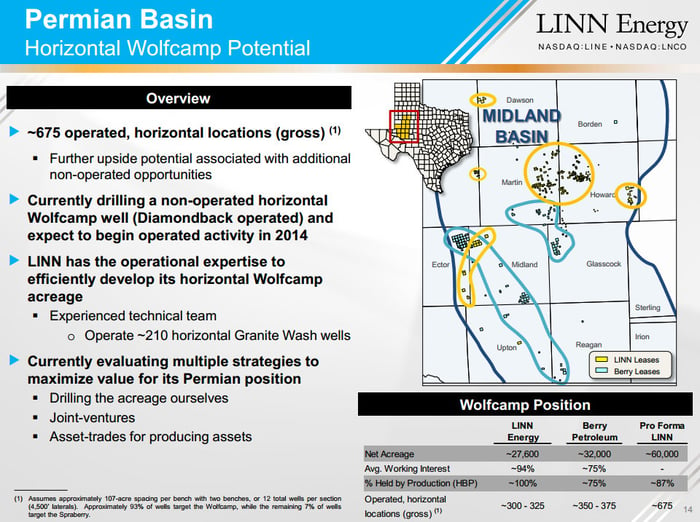 The reasons this is still a big secret is because the drilling shift from vertical to horizontal in these areas of the Permian Basin is still in its infancy. That's actually creating some crazy shifts in reporting as one of LINN Energy's peers, for example, was forced to erase 185 million barrels of oil from its books as it can't yet book the horizontal inventory because there isn't enough data. That said, early data is so compelling that the company believes that it will likely add back nearly 600 million barrels of oil equivalent over the next few years as it drills more horizontal wells. Similar horizontal potential exists at LINN Energy and by association is available to LinnCo investors as well.

The latest sign
Just today LINN Energy's partner on its first horizontal well, Diamondback Energy, announced that it was adding to its acreage position in the play. The company is picking up 2,825 net acres in the play, and it's paying $174 million for those acres. The company hopes to eventually buy out its partners on the 6,450 gross acres that are associated with this asset package, and it's willing to fork over a total of $397 million to buy out those partners.

To put those numbers into perspective that's more than $61,500 per acre. That's a lot of money for just 1,600 barrels of oil equivalent per day of production and about 4.4 million barrels of oil equivalent in proved reserves. That's because Diamondback Energy isn't interested in what those acres are doing now, it wants the potential riches underneath. These riches include prospective drilling locations in the Wolfcamp A & B, Upper & Lower Spraberry, Cline and Clearfork horizons. In total, Diamondback Energy sees upwards of 112 future well locations.

What this deal means for LINN Energy and LinnCo Investors
Like I mentioned previously, LINN Energy believes it holds about 60,000 net acres and 675 future drilling locations that are prospective for the Wolfcamp. Using the latest Diamondback Energy deal as a guide, that values LINN Energy's acreage at upwards of $3.7 billion.

Investor takeaway
LINN Energy notes that it has three options with its horizontal Wolfcamp potential as it can drill it, joint-venture it or trade it for other producing assets. Any of these options would unlock what appears to be a lot of hidden value for the company. This upside potential provides an added layer of security to the income LINN Energy and LinnCo pays investors each month, making both rock-solid payouts.

Matt DiLallo owns shares of Linn Co, LLC and Linn Energy, LLC. The Motley Fool has no position in any of the stocks mentioned. We Fools may not all hold the same opinions, but we all believe that considering a diverse range of insights makes us better investors. The Motley Fool has a disclosure policy.

Is This Blueprint from the Past LINN Energy LLC's Only Hope for Survival?
376%