AT&T is largely seen as a strong dividend play, but is the dividend really as safe as investors expect?

Some investors are so sure that their company's dividend is safe that they fail to properly examine the payout. If there is anything we've learned over the last several years, it's that no dividend is carved in stone. In the telecommunications sector, local companies seem at risk, but AT&T (T 1.01%) and Verizon (VZ 0.26%) seem relatively safe. The question for AT&T investors is, what can they expect from the company's dividend in the future?

Two big challenges
AT&T competes in two massive markets, wireless and wireline. The company's wireless division competes with the likes of Verizon, Sprint, and many others. On the wireline side, Verizon is a competitor, again, but added to the list are local telecoms like CenturyLink (LUMN -0.91%) and Frontier Communications, among others.

Two of the biggest issues facing AT&T are the ability to balance the cash needs of the business with investors' constant demand for better dividends. When it comes to needing cash, many times these companies turn to debt.

AT&T's debt-to-equity ratio of 0.8 looks relatively strong compared to Verizon's 0.9 or CenturyLink's 1.2. However, looking at AT&T's history, this number has been creeping higher each year.

In 2010, AT&T's debt-to-equity ratio was 0.53. By 2012, this ratio had crept up to 0.73, and in the current quarter to 0.76. While AT&T spends just 12% of its operating income on interest payments, if the company continues to grow its debt balances, interest costs could become a problem in the future.

The second big challenge facing AT&T has been largely conquered. The most important aspect to income-focused investors is a company's payout ratio. In the three years between 2010-2012, AT&T's core free cash flow (net income plus depreciation, minus capital expenditures) payout ratio hovered at more than 100%.

In the last four quarters, AT&T has lowered this payout ratio to 79%, and in the current quarter it dropped further to 61%. While this is higher than CenturyLink at 53% or Verizon at 25%, AT&T's dividend looks safer than before.

Six years of less
To determine what AT&T might do with its dividend in the future, it helps to look at the company's past. While history may not repeat itself, it is a good starting point to determine what investors might expect. 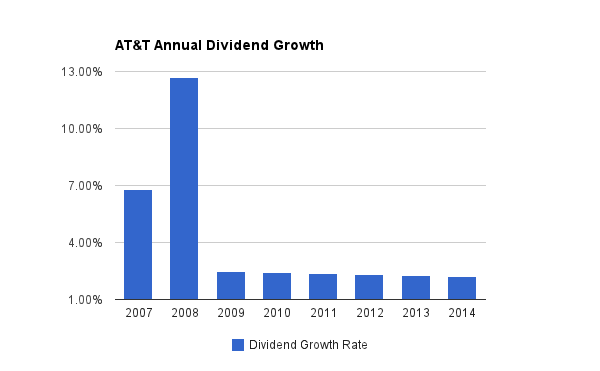 As you can see, prior to the Great Recession, AT&T raised its dividend by a significant amount. However, beginning in 2009, the company's annual dividend increase decelerated. With a 2.5% increase in 2009, the annual increase has declined sequentially each year to a low of a 2.2% in 2014.

Five years of more?
The good news for AT&T investors is, the last six years might be about to reverse course. With AT&T's payout ratio near 60%, the company's cash flow isn't being completely consumed, as it once was.

With analysts calling for EPS growth of about 6% over the next few years, AT&T's net income is expected to rise. This growth rate puts AT&T squarely between Verizon's expected growth of 9% and CenturyLink's expected 1% growth.

AT&T's depreciation allowance has been stable over the last year, as has the company's capital expenditures. With net income expected to rise, in theory the company's payout ratio should continue to fall. The company retired 7% of its diluted shares in the last year, which is better than CenturyLink's 6% share decline, and far exceeds Verizon's share increase of 0.5%.

Even if AT&T wants its payout ratio to fall further, net income growth should accomplish part of this feat. If this is the case, AT&T's dividend increases should be in the range of 2%-3%. However, if the company is comfortable with its current payout ratio, investors may be positively surprised. In theory, AT&T might raise the dividend to a rate closer to EPS growth of 6%.

Foolish final thoughts
With continued improvement in the AT&T wireless business, and decent performance from the wireline business, AT&T investors have a lot to like along with the company's 5.5% yield.

It seems clear that AT&T has improved, the dividend is stable, and the payout's growth may outpace the last few years. If AT&T continues on its current path, investors will be feeling anything but blue about the prospects for their company.

Chad Henage owns shares of CenturyLink and Verizon Communications. The Motley Fool has no position in any of the stocks mentioned. We Fools may not all hold the same opinions, but we all believe that considering a diverse range of insights makes us better investors. The Motley Fool has a disclosure policy.