With Olympics sponsors, Google, and A&E Networks all making public stands for LGBT acceptance lately, is the choice to publicize gay rights views good for business?

Only a few years ago, it would have been highly unlikely that any major corporation in the United States would have publicized its views on the controversial topic of gay rights. Over the last year, however, it has been happening more and more. Companies such as Google (GOOGL -2.10%), Apple (AAPL -1.38%), and Walt Disney (DIS -0.15%) have come out with pro-LGBT advertisements or operating decisions. Other companies such as Barilla and Chick-fil-a have seen the negative side of their company executives' anti-gay views exposed. With all of this new-found boldness regarding LGBT views, should this be something that potential investors consider when making buying decisions?

Coming out in support of the LGBT community
With the mission statement of "Don't be evil," Google strives to assure that the company holds true to its core values and follows up on them with supporting actions. The company regularly changes its homepage image to reflect those values, often on controversial issues. The most recent homepage boldly supports LGBT inclusion in the winter Olympics, responding to the Russian government's actions anti-gay actions and comments over the last few months. 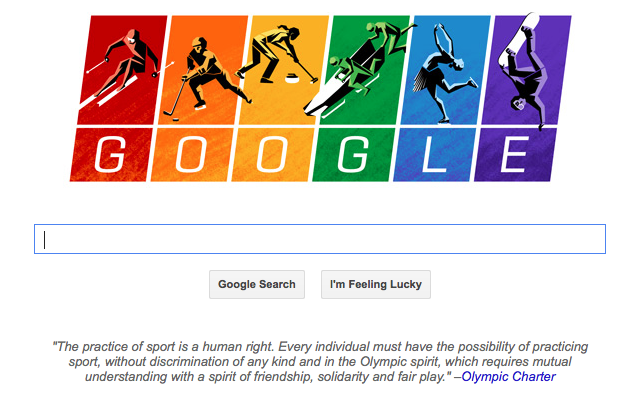 Apple and Google both went public in early 2013 with open letters to the Supreme Court saying that marriage equality is vital to future business success in America. Both companies also made public statements supporting the supreme court's decision after the court ruled in favor or same-sex marriage. As two of the most economically powerful companies in the world, Apple and Google are bold to show such strong support for one side of a very controversial issue. Google itself has never been one to hide its social and political views, even when they mean drastic operating decisions such as not operating in China after not agreeing to censorship constraints.The business strategies at Google and Apple have clearly been winning ones, as the companies have become two of the most powerful in the country. Apple comes in at no. 6 on the Fortune 500 list for 2013, with a market cap of nearly $472 billion. Meanwhile, Google gained $130.7 billion in 2013 alone.

Other companies have had publicity over the last year regarding marriage equality for being on the other side of the issue. The pasta company Barilla took heat after the chairman stated on a radio program that he would never use gay themes in advertising, and that if it offends gay people then they can eat a different brand of pasta. Many people did just that, calling for a boycott. The CEO eventually apologized for his comments. Before he did, however, the German branch of competing brand Bertolli responded with a pro-gay ad that was widely shared through Facebook.

Chick-fil-a, the beloved hometown chicken sandwich restaurant, also saw public backlash following the CEO's comments on Twitter against gay marriage after the landmark Supreme Court ruled to uphold federal gay marriage rights for same-sex couples. The company also apologized and later said in a Wall Street Journal interview that "We are leaving political decisions and discussions to others and focusing only on what we do best."

Both Barilla and Chick-fil-a are private companies, but it is clear that consumer sentiment on LGBT issues has an effect on their business decisions. The negative feedback and calling for boycotts were enough to warrant action and apologies. Even if these companies did have shareholders, would these kinds of events have had an immediate effect on share price? It didn't seem to for the companies below.

Have investors cared about LGBT support so far?
A&E Networks, and parent company Walt Disney, had a choice to make when the network's blockbuster show Duck Dynasty's character Phil Robertson made anti-gay remarks in a GQ article late last year. The company's reaction to the interviewee's stated views, which compared homosexual acts to terrorism, was to suspend Robertson from the show indefinitely. Unfortunately for Disney, the social media response was blatantly pro-Robertson and other networks quickly made offers to the family to bring the show over to their network. After a petition reached a goal of 250,000 signees, A&E reversed its decision. However, Disney shares were largely unaffected over the two weeks between the interview, network responses, and the decision reversal. The most recent season of the show has just started airing again, and the company's stock has actually been up 6% recently on other non-related good news. The debate itself seems to have had no real effect on the company's stock performance.

Two other companies have also been publicized for how they handled the Duck Dynasty event. Cracker Barrel Old Country Store decided that its stores would stop carrying Duck Dynasty items. On the other side, Under Armor made statements that, while the company doesn't hold an opinion either way on the issue, it would not discontinue its Duck Dynasty-branded line of camouflage gear. As for the investor response to these two companies regarding the event, there was none.

Takeaway
As with Disney, it appears that the markets do not have strong instant reactions to companies and their management's LGBT views. Whether the companies come out in support of marriage equality and inclusion, or their executives use their public platforms to come out against such movements, the companies' share prices do not show immediate action. Therefore, someone who buys and sells in short periods seeking to gain from quick fluctuations in stock prices probably doesn't need to worry about these events.

However, for long-term term investors (as we Fools tend to be), the focus is typically on companies that have strong management, are committed to growing their market share, and have the ability to see and capitalize on market and social trends for long-term growth. Recent polls show that only 31% of those over the age of 65 say that they would vote to allow same sex marriage, while a full 62% of those between the ages of 18-29 are in full support of same-sex marriage and 79% agree with same-sex employment benefits. These statistics show a market trend that I would hope that the companies I am invested in would be able to see.