Please ensure Javascript is enabled for purposes of website accessibility
Log In Help Join The Motley Fool
Free Article Join Over 1 Million Premium Members And Get More In-Depth Stock Guidance and Research
By Todd Campbell – Feb 21, 2014 at 8:00AM

A big mid-stage disappointment sent Avanir's (AVNR) shares tumbling, but the future may not be as bad as some fear.

Avanir Pharmaceuticals (NASDAQ: AVNR) had high hopes for AVP-923, a neuropathy pain treatment for Alzheimer's, Parkinson's, and autism. However, AVP-923 failed to do better than placebo in a key mid-stage multiple sclerosis trial, disappointing investors and knocking shares down more than 50% in December. Here's why investors may not want to give up on Avanir -- yet. 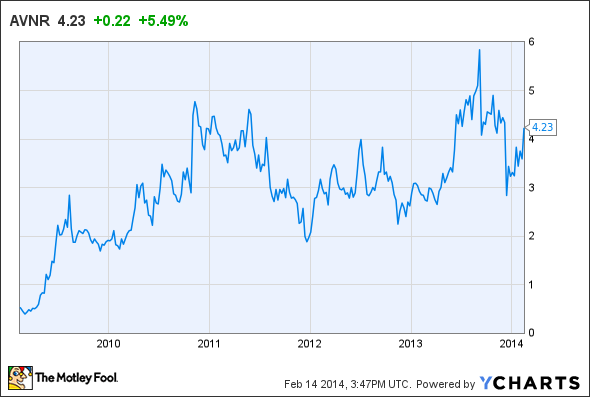 AVP-923 isn't an unproven drug. A different formulation is already being sold by Avanir as Nuedexta, a treatment that won FDA approval in 2010 for involuntary crying or emotions, known as pseudobulbar affect, or PBA -- a secondary condition typically caused by neurological disease, including MS, or brain injury.

So far, Nuedexta has been a success. Avanir reported that Nuedextra's sales grew 15% to $23 million in the fourth quarter from the third quarter, giving the compound a net revenue annual run rate of $100 million. Based on Avanir's experience with Nuedexta, the company thinks other formulations of the compound could significantly broaden the drug's use as a neuropathy pain reliever across the primary causes of PBA.

This belief was backed up in early stage MS trials; however, it was disputed in the recently failed mid-stage study when AVP-923 failed to outperform placebo.Avanir thinks the failure may not reflect AVP-923's true potential, however, given that results from the placebo group were better than expected.  As a result, Avanir will be poring over the data to see if there's a way to salvage the MS program.

It's a setback, but it's not over yet
Nuedexta may soon have help footing Avanir's R&D bill from AVP-825, a breath-powered therapy for acute migraine. Avanir filed for AVP-825's approval with the FDA at the end of January, and if the therapy gets the go-ahead, it will become the only dry-powder inhaled version of sumatriptan -- a drug GlaxoSmithKline (GSK 0.89%) sold as Imitrex before losing patent protection in 2009.

No one knows whether AVP-825 will win market share if it gets approved; however, Imitrex was a highly successful compound for Glaxo. Pozen (NASDAQ: POZN) licensed the drug to Glaxo in 2003, and Imitrex went on to become a blockbuster, generating more than $1 billion in sales in 2008 -- the year before it lost patent protection.

Pozen (NASDAQ: POZN) sold its royalty rights to an investor for $75 million in 2011, so it no longer has ties to the therapy; however, Glaxo still made $295 million selling various formulations of Imitrex last year.

Outside of AVP-825, Avanir is also developing AVP-786, another version of Nuedexta. This time, Avanir is combining dextromethorphan with deuterium to increase effectiveness and make it last longer in the body. Avanir believes these advantages will make AVP-786 successful as a treatment for treatment resistant major depression. Avanir is advancing the drug into human trials this year.

And Avanir (NASDAQ: AVNR) hasn't given up on AVP-923, either. The company enrolled its first patient in a phase 2 proof-of-concept trial as a treatment for levodopa-induced dyskinesia, or LID, last year. Levodopa is the standard of care for treating Parkinson's, and its chronic use can result in the muscle control disorder. More than 50% of Parkison's patients treated with levodopa for more than five to 10 years will develop LID, suggesting an opportunity for AVP-923.

Fool-worthy final thoughts
Nuedexta's double-digit sequential revenue growth shouldn't be ignored -- particularly if growth continues again this quarter. Since other biotechs are being acquired at up to 10 times sales, an argument can be made that Avanir's current market cap of $600 million reflects only Nuedexta and doesn't price in Avanir's (NASDAQ: AVNR) potential from its AVP-825 migraine therapy, AVP-786, or a resurrection of AVP-923. If that's the case, investors may want to keep an eye out for the FDA's decision on AVP-825 and early results from the Parkinson's study, which are expected later this year.

Todd Campbell and The Motley Fool have no position in any of the stocks mentioned. We Fools don't all hold the same opinions, but we all believe that considering a diverse range of insights makes us better investors. The Motley Fool has a disclosure policy.