Merck may have an edge over Pfizer in protecting and growing dividends thanks to a low payout ratio and possible asset sales.

Dividend darlings Pfizer (PFE -0.35%) and Merck (MRK -0.03%) have been core holdings for income investors looking to offset anemic bond yields. With market volatility on the rise and bond yields unlikely to improve anytime soon, dividend yields for both companies are near five-year lows.

However, patent expiration threatens earnings at both companies, suggesting that dividend investors may be taking a risk owning shares. So, let's dig deeper and see if there's reason to buy. 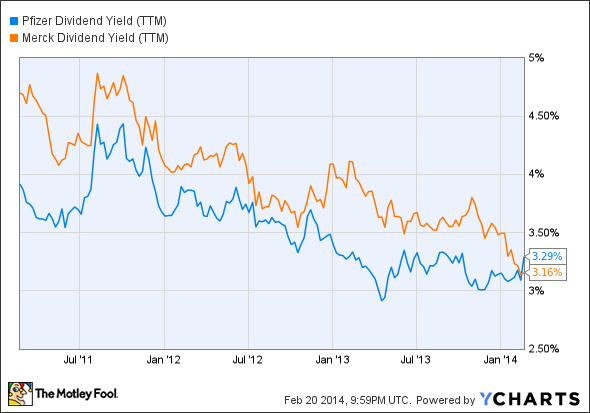 Slogging through the mud
Few challenges weigh more on drugmakers than patent expiration. The loss of exclusivity can chop 70% to 90% off branded drug sales once patents expire. That creates vicious headwinds, particularly for dividend-paying big pharmaceutical companies intent on growing their dividend over time.

At Pfizer, the loss of exclusivity on the world's former best-selling drug, Lipitor, makes for a particularly rough road. Lipitor racked up peak sales of $13 billion, and accounted for more than a quarter of Pfizer's total revenue in 2006. Lipitor's sales have sunk by nearly $11 billion since losing patent protection in 2011.

Adding to Pfizer's struggle is the loss of protection in Europe for Viagra last year. Viagra's overseas sales slid 29% to $265 million in the fourth quarter from a year ago. The company is also collecting less money from Amgen, which is no longer sharing North American profit on Enbrel with Pfizer.

Over at Merck, expiration hasn't been as painful, but it's still crimping results. Merck lost exclusivity for its $5 billion-a-year Singulair in 2012. Sales of Singulair toppled nearly 70% to $1.2 billion in 2013, forcing Merck's full year sales down 7% to $44 billion.

Clearly, lost sales from expiration may prevent both companies from increasingly their dividend anytime soon. The cash dividend payout ratio, which divides dividends by cash from operations, minus capital expenditures and preferred dividends, is 62% at Merck and 42% at Pfizer. So while neither is straining too hard to make their dividend payments, neither has a lot of room for increases either. 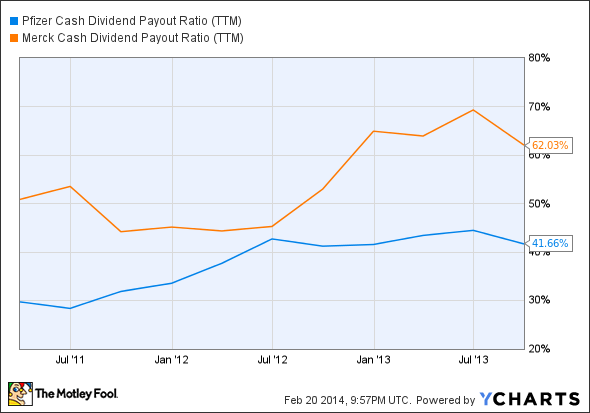 Battling back toward growth
Pfizer's best-selling drug, Lyrica, saw sales improve 11% year over year in the fourth quarter. Pfizer also got a solid showing from newly launched oncology drugs Xalkori and Inlyta. Sales of those two drugs doubled to $200 million last quarter. Xeljanz had sales of $46 million in the quarter too, and Pfizer hopes other indications like psoriasis can help sales climb further.

Pfizer also appears to be winning converts to its anticoagulant Eliquis, which is co-marketed with Bristol-Myers Squibb (BMY -0.53%). According to Bristol's fourth-quarter results, Eliquis sales grew from just $12 million in the second quarter to $71 million in the fourth quarter.

That makes the failure of one of Pfizer's most promising compounds, dacomitinib, even more disappointing. The drug failed to outperform Tarceva in a pivotal phase 3 lung cancer trial, increasing the need for Pfizer's breast cancer drug palbociclib to succeed. Solid mid-stage results for palbociclib in advanced breast cancer have some analysts thinking Pfizer may try for accelerated approval.

Pfizer also has a phase 2b study under way for its PCSK-9 cholesterol drug RN316. Investors should get insight into how well RN316 matches up against competing PCSK9 drugs including Amgen's advancing AMG-145 and Sanofi's and Regeneron's alirocumab this year. Pfizer will also update investors on a phase 3 trial of Xeljanz as a treatment for psoriasis this year, too. Additionally, Pfizer and Merck are working together on ertugliflozin, an SGLT-2 inhibitor for type 2 diabetes.

In addition to ertugliflozin, Merck's MK-3475, an anti PD-1 immunotherapy, may have big potential as a cancer-busting treatment. A rolling FDA filing for MK-3475 could come in the first half of this year. Merck also plans to file for FDA approval of new drugs for osteoporosis and insomnia, has a mid-stage Hep C program under way, and is advancing MK-8931 for Alzheimer's disease.

At both companies, winning FDA approval for upcoming compounds is vital to increasing dividends, something Merck has done better than Pfizer over the past five years. 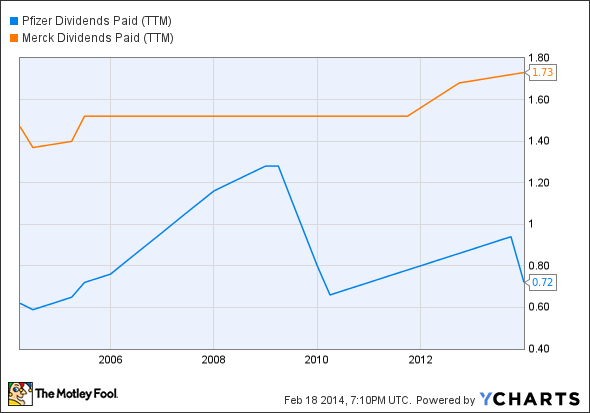 Fool-worthy final thoughts
There's little for Fools to like about the growth prospects for sales and profit at these two companies this year. Both may have big drugs coming, but neither is compelling in terms of future dividend increases. If Merck succeeds in selling its nutrition and animal health business, a cash windfall may encourage it to return more money to shareholders. However, given how the two companies are currently positioned, dividend investors may want to look elsewhere for now.