While pricing competition from peer automakers is currently putting pressure on profitability, Ford is laying the groundwork for strong growth with a greatly expanded selection of models.

Despite a sagging share price and flagging market sentiment over the recent couple of months, Ford presents investors with a unique opportunity to buy both heady growth prospects and a high yielding dividend at a cheap price. While a confluence of factors from a currency-related sales hit to expanded capital investment will make 2014 a challenging year for the automaker, there is reason is believe that headwinds will turn into tailwinds by 2015.

Priced like a lemon
At $15.24 a share (as of Feb. 14), or 9.9 times this year's earnings estimates and eight times those for 2015, reflecting a PEG ratio of just 0.6, Ford has to be considered one of the steepest value plays within the auto sector and even the market in general. With five-year growth estimates of about 14%, either investors are discounting future cash flows at an unbelievably high rate due to real risks that lurk around the corner, or Benjamin Graham's "Mr. Market" is having one of his moods again, at least when it comes to this stock. While earnings are certainly volatile in the auto sector, and a discount relative to the S&P 500 is to be expected, the sell-off in Ford has been greatly overdone, and shares aren't reflecting anything near their intrinsic value right now. 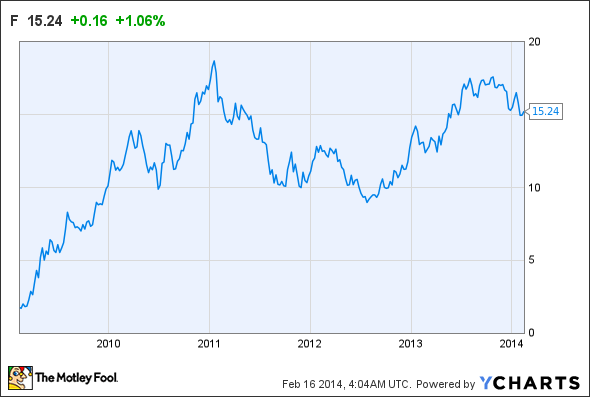 A weak yen equals strong competition
Japanese currency devaluation, thanks to the easy monetary policies of Prime Minister Shinzo Abe, fondly referred to as Abenomics, have lifted Honda and Toyota while putting pressure on Ford. The falling yen has allowed the Japanese automakers to sell vehicles for much lower prices (since a stronger dollar increases the buying power of American consumers without affecting the profitability of the Japanese companies), forcing the American auto companies to follow suit, crimping profits. In order to keep pace, American companies have been forced to offer greater incentives to customers watch sales slide. Ford has largely stayed out of this race to the bottom, likely eyeing a boost in volume from an expanded product offering over the next couple of years.

Expanded offering
While ROIC (return on invested capital) is a favored metric to follow for many Fools, it will be very interesting to see what kind of returns Ford gets from its huge investment in a greatly expanded model rollout. With 23 new vehicles set to hit the global market in 2014, the company has made a huge bet that could pay massive dividends given the popularity of recent models, particularly in the mid-size and crossover space. While the F-series remains a solid driver of international sales, compact and subcompact models such as the Fusion and Crossover, respectively, have been very well received in multiple markets, especially in countries like China, Ford's most promising market for future sales growth.

Europe less of a headwind as sales improve
While Europe has been a drain on profits since the financial crisis five years ago, there is light at the end of the tunnel. Having lost $571 million in Q4 2013, the picture might appear bleak, but couple that with the backdrop of 9.2% growth in European sales in January, fueled by the U.K. and Germany in particular, and it would appear that the worst may well be behind the Blue Oval. Any improvement in that market is a huge boon to the company's bottom line, considering how much of a drag it has been in recent years. Executives actually eye 2015 as the year that the European division returns to profitability, which would enhance Ford's earnings considerably.

Big opportunities in China
While conditions in Europe may still be challenging, China represents a growth opportunity of fairly epic proportions. At only 4% of the market currently, Ford has a lot of ground to make up. Considering the success of its recent model roll-outs in the Middle Kingdom, the future looks very promising. By the end of 2015, executives hope to increase market share to 6%, and the company is going full bore in that endeavor, plowing $4.9 billion into expanding operations in China alone. With January 2014 sales showing year-on-year growth of 53% and 2013 sales growth of 49% on 935,813 vehicles, it's little wonder that Ford is investing so much in the region. With a burgeoning middle class and many enthusiastic first time car buyers, Ford has become an aspirational brand in a booming market. The opportunity in a country with 1.3 billion people and quickly improving personal wealth spells huge future profits for this auto maker.

Pension funding gap closing
While Ford's pension liabilities continue to be a big drag on cash flow, that aspect of the business appears to be improving dramatically. Over the past year, as interest rates rose, the company's funding gap for the $52 billion liability shrank (interest rates affect the future value of pensions and annuities partly due to the large proportion of bonds in the portfolios -- rising market rates mean higher discount rates and lower funding liabilities). Assuming prevailing rates regain their footing and rise beyond 2013 levels, Ford could actually close the gap completely, which would free up billions in free cash flow, allowing for an increase in dividends, more capital spending, etc. Company executives are keeping a close eye on the situation and are anxious to get this weight off Ford's back.

"Once we get it fully funded, de-risked and sort of put it in a box, it gives us the ability not to worry about it so much and take future cash flow and put it wherever we want," says Ford CFO Bob Shanks.

Another aspect of this development which should have bearish investors rethinking their position on the stock is that a fully funded pension would not only free up billions of dollars in capital, but also greatly improve Ford's credit quality and possibly bump its rating a couple of notches (having already been given a boost to investment-grade in 2013). This could save the company many millions in interest payments on its debt and allow it to make another debt offering to buy back its own stock which is trading at such a low multiple, especially given future growth prospects. Not only would such a move be accretive to shareholders, but it would show that Ford's best bet is to reinvest in its own company -- an emphatic vote of confidence in its business and a clear signal to investors that the best is yet to come.

Foolish conclusion
Although 2014 promises to be somewhat of a challenge for Ford's top and bottom lines, there's little doubt that opportunities for future profits abound in just about every market it competes in. While a weak yen is helping to juice North American sales for the Japanese automakers, that's an ephemeral advantage which is sure to reverse course at some point in the future, much to Ford's benefit. An expanded offering of 23 models globally, the most in the company's history, also should help to accelerate sales growth going forward, not to mention earnings. If market conditions in Europe have truly bottomed out and sales continue to accelerate, that segment of the company's business could turn into a significant tailwind, further boosting profits. Include the explosive growth and improving market share figures in China to the equation and you have the potential for very significant sales growth in 2015 and beyond. Investors should also be pleased with the quickly shrinking funding gap in Ford's single biggest liability: its pension.

If you add all of these factors together, then its difficult to see why this stock is trading at roughly eight times forward earnings, with a dividend yield of 3.3%. With such myopic and short-sighted investor sentiment swirling around Ford, it seems pretty clear to me that a golden opportunity for outsize profits exists in shares of this iconic American brand. While the call to "buy American" might seem somewhat quaint these days, I think it is definitely advice well worth taking in this case, especially considering the dearth of truly good opportunities in this frothy market.