Although the price Actavis' paid for Forest Labs is far higher than it would have paid two years ago, Actavis may have still gotten a bargain.

The latest acquisition by Actavis (AGN) may have some scratching their heads. Not because the company overpaid -- at 7 times sales it didn't -- but because Forest Labs (NYSE: FRX) could have been bought much cheaper.

Ahead of the loss of patent exclusivity on its best selling depression drug Lexapro, investors toppled Forest's shares by 30% to less than $30 per share into the end of 2011. Since, shares have doubled to decade highs as late stage drugs and a significant restructuring boosted optimism. Given where the share was -- and where it is now -- is Actavis making the right move? 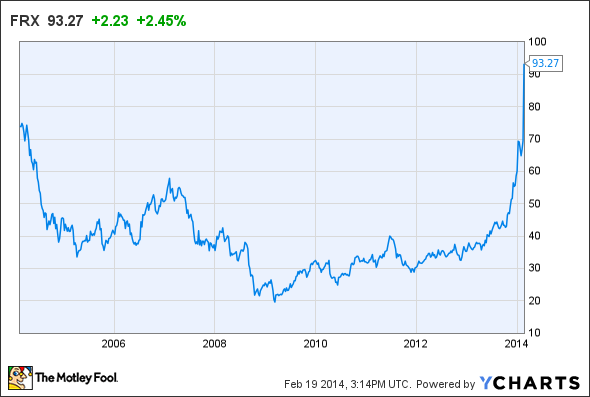 Rebuilding CNS dominance
Actavis' may have taken a wait-and-see approach with Forest given the Lexapro headwind and the loss of patent exclusivity for Namenda, its $1.6 billion a year Alzeimer's drug, in 2015.

However, despite Forest's $3.5 million in annualized revenue remaining significantly below the $4.5 billion it recorded in 2012 -- the year before Lexapro went off-patent -- the corner appears to have turned.  Forest's sales totaled $878 million last quarter, up 23% from a year ago.

Forest's momentum is likely to carry over into 2014 thanks in part to a slate of new CNS drugs, including depression treatment Viibryd, which won approval in 2011 and produced $53 million in sales last quarter, up 30% from last year. The FDA also green-lighted Fetzima, another depression treatment, last fall. Since Fetzima is an SNRI like Lilly's newly expired $5 billion a year Cymbalta, its sales may help boost revenue this year.

But Actavis won't just be relying on Viibryd and Fetzima to win back Forest's market share in CNS. Forest also acquired Saphris, a treatment for schizophrenia and acute bipolar mania, from Merck in December. Forest thinks marketing Saphris alongside Viibryd and Fetzima could significantly increase sales beyond Saphris' current $150 million annualized rate.

Actavis will also get a potential fourth CNS drug in cariprazine too. The FDA requested additional safety data on the drug when it opted against approving it for schizophrenia last fall, but that data may come this year in the form of an ongoing phase 2b study of cariprazine for depression.

Actavis is also probably counting on Forest's deeply entrenched CNS sales team to help its newly launched generic Cymbalta capture share this year. And Forest may have significantly reduced Actavis' fear over Namenda's pending expiration given sales of its newly launched, longer-lasting formulation jumped 228% last quarter. That prompted Forest's decision to shelve the original formulation this coming August. If Forest converts most of its Namenda users to the XR formulation this year, a significant portion of Namenda's market share will remain protected in 2015.

Bringing along other opportunities
In addition to the rebuilt CNS product line, Actavis also gets two fast growing COPD drugs in Daliresp and Tudorza, which won approval in 2011 and 2012, respectively. Daliresp sales grew 53% to $27 million and Tudorza sales grew from $17 million in the fiscal second quarter to $20 million in the fiscal third quarter.

Actavis also gets Bystolic, for hypertension, and newly launched Linzess, for irritable bowel syndrome. Sales of Bystolic grew 20% year-over-year to $130 million and inventory building by distributors resulted in Linzess sales of $19 million last quarter. Additionally, Actavis gets Aptalis, a gastrointestinal and cystic fibrosis drug maker that Forest bought for nearly $3 billion in January. Forest was guiding for Aptalis to contribute $700 million in sales and $0.78 per share in non-GAAP EPS to results in fiscal 2015.

Fool-worthy final thoughts
Sales of Forest's most recently launched compounds grew nearly 60% year-over-year to $375 million last quarter, suggesting there may be a significant opportunity for growth over the coming years. With the threat to Namenda lessened, and with an intriguing gastrointestinal lineup, Actavis will have plenty of revenue opportunities.

Importantly, Forest's post-Lexapro restructuring means a lot of profit friendly costs have already been eliminated -- making integration simpler. Whether all of this translates into a bargain for Actavis remains to be seen, but given all the possibilities it seems the acquisition -- while done at a price far higher than two years ago -- may prove savvy.

Todd Campbell has no position in any stocks mentioned. Todd owns E.B. Capital Markets, LLC.  E.B. Capital's clients may or may not have positions in the companies mentioned. Todd also owns Gundalow Advisors, LLC. Gundalow's clients do not have positions in the companies mentioned. The Motley Fool has no position in any of the stocks mentioned. Try any of our Foolish newsletter services free for 30 days. We Fools may not all hold the same opinions, but we all believe that considering a diverse range of insights makes us better investors. The Motley Fool has a disclosure policy.