State debt levels are rising, but none are potentially more perilous than the debt levels in these five states.

The United States is largely regarded around the world as the preeminent economic superpower, but that doesn't hide the fact it also has a really big debt problem.

According to USDebtClock, a site capable of real-time run-rates of our national debt, personal debt, total interest paid, and a number of other statistics, the U.S. national debt now stands at nearly $17.3 trillion dollars. To put that into another context, we're looking at a debt of nearly $150,000 per taxpaying citizen, or practically $55,000 for every man, woman, and child within the confines of the United States.

The trajectory of our debt growth over the past couple of decades has been truly alarming, and it has only been further complicated in recent years by Congress' inability to meaningfully reduce the federal budget and agree upon long-term debt-ceiling solutions. Two weeks ago, Congress, just days before the debt ceiling was set to be reached, agreed upon a boost to the debt limit allowing the government to borrow even more money to pay its bills through March 2015. Put plainly, our debt problem has become a vicious and repeating cycle.

Understanding state debt versus federal debt
Yet, here's the catch: Debt on a state level can be just as scary. According to USDebtClock, state debt currently totals $1.15 trillion and is rising by the second. A completely different figure, which encompasses state and local governments, can be found on the St. Louis Federal Reserve's website, where the current debt total reads $2.98 trillion. 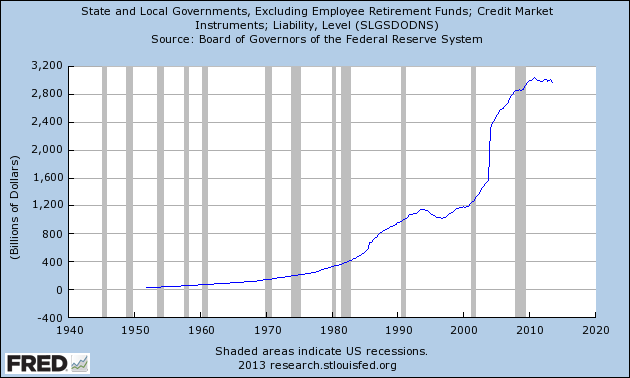 The first thing we have to understand here is that state debt and federal debt aren't the same thing, but that doesn't mean I'm still not concerned about rapidly rising state debt levels. Federal debt is issued in the form of bonds and helps pay for ongoing programs and services, such as funding our military, funding Medicare and Social Security, and even paying interest on the existing national debt.

State-issued debt almost always takes the form of infrastructure project improvements or maintenance. In other words, federal debt is ongoing and passed down generation by generation, whereas state-issued debt tends to be a one-shot deal and is aimed at boosting economic growth.

While that's an important distinction to make, it doesn't make me any less confident that we aren't entering into dangerous territory regarding state debt levels in select states. High debt levels could persuade states to boost taxes or take other disadvantageous economic measures in order to reduce their debt. Ultimately, that may bode poorly for businesses and consumers.

Five states with the highest debt levels
With that in mind, today I want to take a look at five states that boast the highest state debt per capita (total state debt divided by the number of people in the state) according to data from Tax Foundation, note what similarities these states may share, and examine how understanding the ins and outs of these state debt levels could give us an investing edge.

Without further ado, here are the five states with the highest per capita debt levels:

With the exception of Alaska, the primary similarity here is these are all states in the Northeast. These four states -- Massachusetts, Rhode Island, Connecticut, and New Jersey -- have a relatively large number of people squeezed into a relatively small land area, requiring states to spend a lot of money on infrastructure upkeep such as roads and bridges, costs that are usually funded through bond offerings. Expanding the list to a top 10 would have also included New York, Delaware, New Hampshire, and Vermont.

Another common ground between many states, not just the five listed above, is that they've been turning to deficit financing to cover budgetary shortfalls since the recession.

Economic downturns, especially of the magnitude that we witnessed in 2008-2009, are taxing on consumers -- but that doesn't mean a state's demand for revenue or for its needs to upkeep its roads and bridges slows down.

Rather than boosting taxes during a recession and crushing its citizens further, some states have turned to bridging this gap with bond issuances to fund the difference. With interest rates currently low, deficit financing has been but an afterthought. However with the Federal Reserve beginning to taper its economic stimulus known as QE3, there's a chance that borrowing rates will normalize at a much higher rate in the coming years.

Therefore, getting stuck in a deficit financing pattern over the long run could be bad news, especially for states with already high debt relative to the number of citizens living in that state.

How understanding these debt levels may give you an edge as an investor
The thing with debt levels is that they don't just creep up overnight and surprise investors. State debt is a public and viewable measurement that can assist us in making smarter investment decisions over the long term.

One investment scenario that comes to mind regarding such high statewide debt levels in the Northeast is that it could constrain homebuilders and home prices in the coming decades.

If states run into borrowing issues, or are required to pay higher rates to borrow, it may necessitate higher taxes on citizens. Local taxation is one of the many factors homeowners take into consideration when moving, and it could be a reason to avoid a particular state. Toll Brothers (TOL -1.96%), for example, which focuses on higher-end homes and is blanketing much of the East Coast, including Connecticut, could discover a slowdown in infrastructure upkeep or higher taxes on wealthier individuals may weaken its long-term growth rate.

If homebuilders run into problems, that portends badly on the banking industry in the Northeast. Here, I would point to a regional bank like Webster Financial (WBS -3.75%), which is one of the largest banks in Connecticut by assets, but also serves the New England region. While my scenario focuses quite a few years out, a rising debt figure for these New England states could crunch loan activity and make it difficult for Webster to expand its bottom-line profits.

Ultimately, nothing unexpected is going to happen to either of these stocks or sectors overnight in the Northeast, but if debt levels don't begin to level off and abate in this region, we could find ourselves on a slippery path toward a regional contraction, where these companies do suffer.

The Motley Fool has no position in any companies mentioned in this article. We Fools may not all hold the same opinions, but we all believe that considering a diverse range of insights makes us better investors. The Motley Fool has a disclosure policy.

Why Is Rithm Capital's Dividend So High?