While Tesla announced another stellar quarter last week, Clean Energy Fuels reports earnings next week. Westport Innovations announces one day before. The biggest difference for investors? Clean Energy and Westport have been stinkers, while Tesla has been a rocket ship. That may be about to change.

The past few months have been horrible for Clean Energy Fuels (CLNE 2.60%) and Westport Innovations (WPRT -2.66%) investors, with both stocks down 30% since last September, while the market has continued to climb: 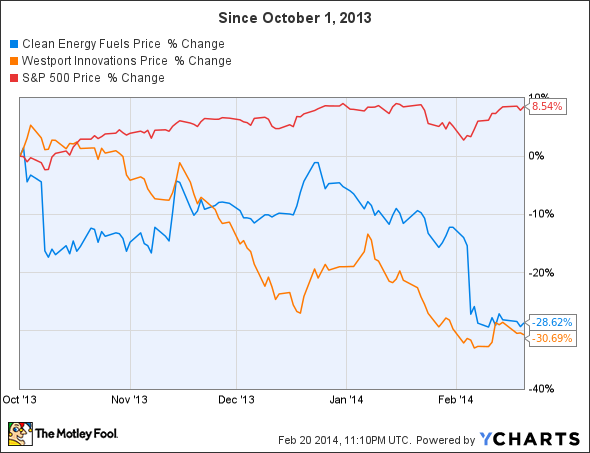 With both companies scheduled to announce earnings next week, what should investors do? Is more bad news sure to send shares lower, or are these two leaders in natural gas vehicles set to turn the corner? Let's take a closer look.

Painful two years
In all fairness, investors in both of these companies have suffered since March of 2012: 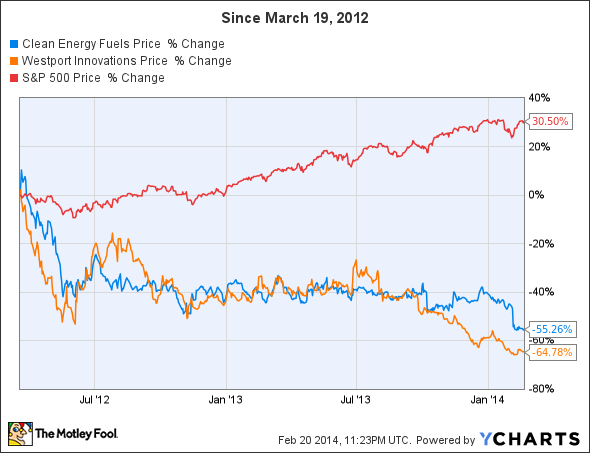 In the midst of a historically great bull run, investors have seen Clean Energy and Westport fall 55% and 65% respectively since peaking, on early excitement about the potential of natural gas vehicles. While Mister Market's early excitement has fallen away as sexier investments like Tesla (TSLA -1.14%) and its Model S have drawn his attention, the story behind what made both Clean Energy and Westport so compelling in 2012 has only grown stronger in the past two years.

The Model S has shown up on nearly every magazine cover and "Ten Best" list since its debut, and sales continue to increase. If Tesla can maintain its current sales rate, the Model S could be one of the best-selling luxury sedans in the world in 2014 -- far beyond just being a niche player in an elite market segment. Simply put, this amazing car has changed the way people view the electric car, and Mister Market has continued to chase the stock price higher and higher.

What do we know?
While Tesla's amazing story has been happening in the public view, much of what's advanced in the world of natural gas transportation has remained relatively hidden.

For example, in December Clean Energy Fuels reported that its current customer base had ordered 70% more natural gas vehicles in the first nine months of 2013, versus the same period in 2012. Additionally, we've also learned that the company has opened more than 25 of its America's Natural Gas Highway, or ANGH, stations, and is currently opening new locations at a rate of two to three per month. We also know that, through the third quarter, the company increased gallons delivered by 11% versus 2012, and that growth in the third quarter accelerated to a 17% increase in gallons delivered.

We've also learned that -- so far -- Westport's joint venture with Cummins has seen strong demand for the ISX12 G engine, of which the 400hp version is central to this year's success for Clean Energy Fuels. This engine, which didn't begin production until August of 2013, is the first large-scale production engine that can provide both the power and fuel efficiency requirements of a large percentage of over-the-road truckers that would fuel at Clean Energy's ANGH stations. 2,500 of these engines were shipped in 2013, and 2014 demand is expected to exceed 10,000 units.

LNG or CNG? Doesn't matter
This created some controversy recently -- and a lot of Clean Energy's falling stock price --  as first a Piper Jaffray analyst simply made what looks like a bad call on LNG tank production at Chart Industries, and then a recent short-seller's article on the website Seeking Alpha claimed than LNG would not stand up against CNG for the vast majority of applications for transportation. This is a critical issue for both Clean Energy and Westport, as Clean Energy's ANGH is being built around LNG for trucking, and Westport has invested significantly in LNG tank technology to go along with its engines.

However, Clean Energy CEO Andrew Littlefair went right after these questions just a couple of weeks ago with a conference call to address many of the recent concerns. The data that he provided not only indicated that a much larger percentage of trucks were adopting LNG than was indicated by the short attack, but also pointed out how his company's thesis on the applications of LNG was still quite sound. Additionally, he reiterated that Clean Energy continues to grow its CNG business -- the largest in the U.S. -- and this isn't slowing down.

Final thoughts: Catalysts in place for growth
We've been hearing about future growth for years, but not a lot has happened to get investors excited about natural gas vehicles. However, when you look back at everything that has happened in the past several years -- from compelling new engine and fuel system options, station buildouts to support fleets, and large buyers like UPS adopting early -- all of these incremental steps point to a massive sea change under way.

So whatever we learn next week, make sure to look at the whole picture, and take the long view. A lot of good things have happened that make 2014 look like the year that natural gas vehicle investors have been waiting for.