Can Alexion Pharmaceuticals retain its top orphan drug maker status, or will this one trick pony lose its audience?

Orphan drugmakers focus on developing drugs for rare diseases, but unfortunately many companies in this space never become profitable. Of those that do, few are able to succeed like Alexion Pharmaceuticals (ALXN)has. Let's take a look at just how well it has done compared to its peers, then look at its prospects going forward.

Comparisons to its peers
Let's start by looking at some of the other prominent players in the orphan drug space. Short bowel syndrome drug developer NPS Pharmaceuticals crossed into positive territory with Gattex sales during the fourth quarter of 2013. Its single wholly owned product didn't get it there alone, however. Royalties from Amgen for Sensipar and Mimpara helped.

Surprisingly, the company managed to turn a profit and submit a biologics license application for a parathyroid replacement hormone less than a year after the FDA approved Gattex. The agency should make a decision this October.

The more mature orphan drug maker BioMarin Pharmaceutical (BMRN 2.47%) has four products on the market, and just won approval for a fifth earlier this month. However, the company hasn't posted a profit since 2010. Vimizim is priced at $380,000 per patient per year, with an estimated market of about 900 patients in the United States. With all else being even, the company would probably need to reach every patient with Morquio A syndrome in the U.S. for it to reach positive territory this year. 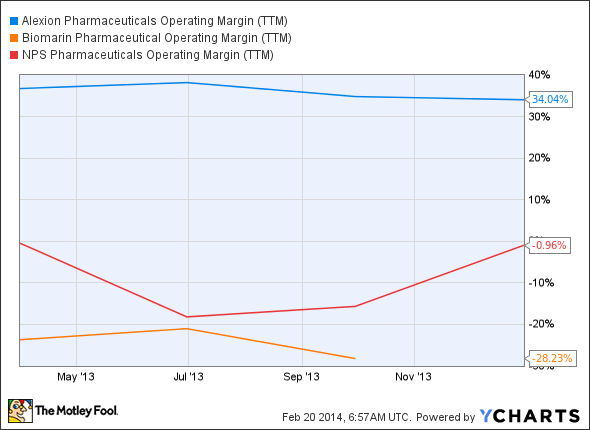 Rather than criticizing the performance of NPS Pharmaceuticals and BioMarin, I want to illustrate the incredible success of Alexion this far. Soliris (eculizumab) is the first and only available therapy for both paroxysmal nocturnal hemoglobinuria (PNH) and atypical hemolytic uremic syndrome (aHUS.) Despite marketing just one product, Alexion has steadily increased sales in each of the last eight quarters.

What concerns me is that over the past several quarters sales growth has decelerated somewhat, while the company's stock price has done the opposite. 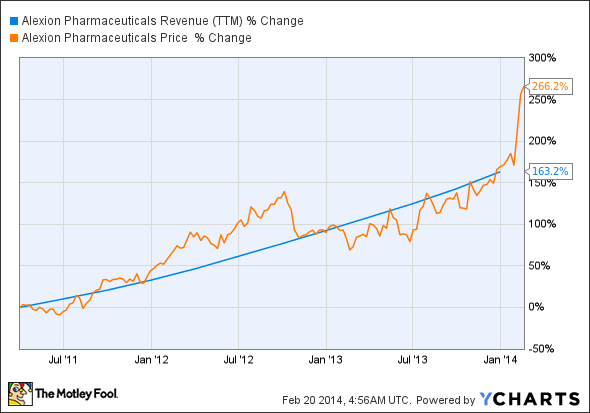 Expansion efforts
Clearly, the market expects major label expansions for the expensive therapy and soon. Here's why I think most analysts are confident this can happen.

The complement system is a cascade of proteins involved in the removal of foreign particles. It plays a vital role in protecting the body from infection, but unchecked it can also cause a lot of unnecessary damage. Soliris is designed to inhibit one of the last steps of the cascade. This allows the complement system to remove foreign particles, but inhibits it from running wild and destroying healthy cells and tissues.

Both PNH and aHUS result from a lack of necessary complement inhibition, and they're not the only ones. Soliris is currently in clinical trials for four more rare genetic conditions. Phase 3 trials for both neuromyelitis optica and myasthenia gravis should begin early this year.

The complement system also plays a role in organ rejection. In addition to additional genetic conditions, Solaris is also in trials for antibody mediated kidney rejection. All told, the label expansions could seriously increase the therapy's available market and Alexion's bottom line.

It should also be noted that Alexion has plenty of time to expand Solaris and advance its existing pipeline. The company's U.S. patent on Soliris will expire in 2021. In the E.U., its patents will expire in 2015 in some countries and 2020 in others. Orphan designations in the U.S. grant exclusivity for seven years (10 years in the E.U.) from the date of approval, regardless of the patent expiration date. Also, a law bundled in with the Affordable Care Act complicates the process of developing generic competition to complex biologics like Soliris.

Beyond Soliris
The next big earner for Alexion will likely be asfotase alfa for severe hypophosphatasia. The way that analysts have been discussing this enzyme replacement therapy lately, its approval seems to be a foregone conclusion. Although the market for this rare disease is estimated at around 1/100,000, Deutsche Bank analyst Robyn Karnauskas believes it must be closer to 1/25,000 in the United States. Her reasoning is based on the high death rate among infants born with the disorder that aren't included in the original estimate. This would translate to an opportunity of roughly $1.6 billion annually, or enough to double 2013 sales.

Final thoughts
Alexion has done amazingly well with the world's most expensive therapy, and will likely continue to be an incredibly profitable orphan drug maker for years to come. Unfortunately for investors, lofty expectations for this company are already priced in. The stock has been trading at over 50 times forward earnings lately. Even if label expansions prove successful and all goes as well for asfotase alfa, it is just too expensive for a value minded investor to get involved. It's definitely worth a place in your watchlist, however.