The U.K.'s cost cutting agency has pushed back on Biogen's (BIIB) Tecfidera, but that shouldn't surprise you.

It shouldn't surprise anyone that the U.K.'s top cost watchdog, the National Institute for Health and Care Excellence, otherwise known as NICE, has balked at Biogen's (BIIB -1.04%) white-hot selling new oral treatment Tecfidera.

After all, this isn't new territory for MS patients in the United Kingdom. In January, Sanofi (SNY 0.19%) finally convinced regulators to pay for Aubagio, its competing oral MS therapy, after the agency had previously opted against it.

Novartis' (NVS 0.99%) oral MS drug Gilenya ran a similar gauntlet when it went up for approval in 2011. Gilenya failed to get the drug approved twice before winning reimbursement in March 2012.

In fact, NICE's action on Tecfidera should likely be viewed status quo, rather than a Tecfidera sell signal. If that's the case, investors selling Biogen on the short-term hiccup last week may end up regretting it. The stock is already back to new highs following the initial slide from $335 to less than $325 following NICE's decision on February 19th. 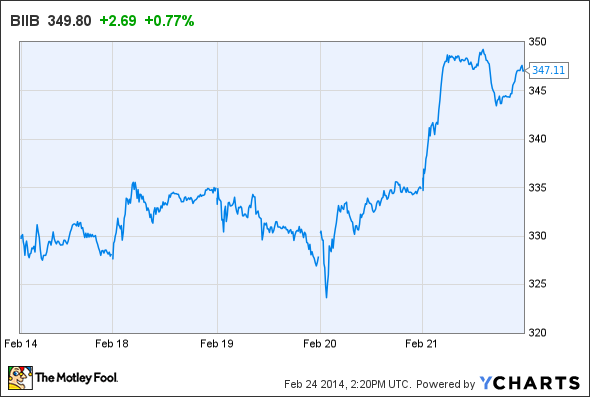 Let's make a deal
Gilenya and Aubagio command list prices of $58,000 and $45,000 per year, respectively, but those prices were discounted significantly to win NICE's approval. A similar negotiation is likely under way between Biogen (BIIB -1.04%) and NICE on Tecfidera, which is priced at $55,000. As I pointed out previously, European prices may eventually be half the U.S. list price.

However, deep discounts in Europe haven't proved a stiff headwind for Gilenya, and they probably won't prove too much of a hurdle for Aubagio. Novartis (NVS 0.99%) sold $527 million worth of Gilenya last quarter, and roughly $900 million of Gilenya's $1.9 billion in sales came from outside the U.S. in 2013.

And it's not like Biogen (BIIB -1.04%) doesn't have plenty of experience making money in the region. The company sold $1.1 billion worth of Avonex and $700 million worth of Tysabri overseas in 2013, a lot of which came from Europe. As a result, analysts project the region may represent up to a third of Tecfidera's eventual $4 billion in peak annual sales.

Fool-worthy final thoughts
Tecidera has been a resounding success in the U.S. and while Biogen (BIIB -1.04%) is tempering analyst enthusiasm by downplaying how quickly it will gain ground in Europe, it's not a stretch to assume Tecfidera will eventually become a top seller there too.

The overall market for MS treatment is growing as a larger diagnosed population shifts to these more expensive next generation therapies. Gilenya's first-to-market advantage has entrenched it as oral market share leader; however, that leadership position will be challenged this year now that Aubagio is more widely available. Looking out even further, winning NICE's eventual support  for Tecfidera may present an even bigger threat to Gilenya, and that means an even bigger opportunity for Biogen (BIIB -1.04%) investors.

Todd Campbell has no position in any stocks mentioned. Todd owns E.B. Capital Markets, LLC. E.B. Capital's clients may or may not have positions in the companies mentioned. Todd owns Gundalow Advisor's, LLC. Gundalow's clients do not have positions in the companies mentioned. The Motley Fool has no position in any of the stocks mentioned. Try any of our Foolish newsletter services free for 30 days. We Fools may not all hold the same opinions, but we all believe that considering a diverse range of insights makes us better investors. The Motley Fool has a disclosure policy.