For one of the most powerful and best-known tech companies on the face of the earth, Microsoft (MSFT -0.59%) certainly has an unimpressive, if not pathetic, presence in the booming market for mobile technologies.

Under the guidance of newly minted CEO Satya Nadella, this will hopefully change.

And if a recent move on Microsoft's part is any indication, the software giant's mobile strategy could be about to shift more than perhaps most realize.

Introducing Android by Nokia
At the Mobile World Congress, a key gathering for the wireless industry held annual in Barcelona, Spain, Microsoft recently revealed the Nokia (NOK 0.85%) Lumia X, the first of its Lumia handsets to be powered by Google's (GOOGL -0.90%) Android mobile operating system. 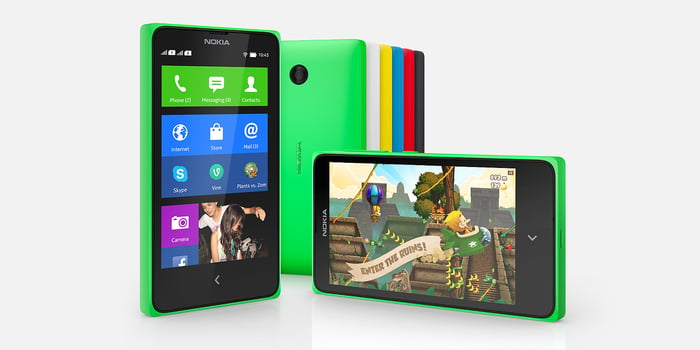 The Lumia X will be the first of several Nokia smartphones to be powered by Google's Android. This move goes back several years to 2012, when Nokia initiated plans to launch a Google-based Android smartphone, only to be swayed later by Microsoft's rich cash infusion. However, with Microsoft's more than $7 billion acquisition of Nokia's handset business set to close in the coming months, bringing a smartphone powered by one of Microsoft's two main rival certainly seems like an odd choice.

But the deal isn't without logic, either. Rather than using Google's suite of apps, including leading services like Google Maps and Google Play, the Nokia X line of smartphones will instead come with a suite of Microsoft and Nokia-based apps like Skype, Outlook, Nokia Browser, and Nokia's Here Maps. However, the Nokia X line will come with Google's app store preloaded, enabling users to access Google's much larger base of apps.

Microsoft mobilizing on multiple fronts
The Nokia-Android storyline is a small part of the broader theme of Microsoft seeking to expand its presence in mobile by almost any means necessary.

Also at the Mobile World Congress, Microsoft said it plans to add nine other hardware partners to its roster of Windows Phone manufacturers in the year ahead, including Lenovo, ZTE, LG Electronics, and many more. Many of these companies are also laser-focused on tapping into emerging markets, which are increasingly becoming the main engine fueling smartphone growth today.

Thus far, Microsoft has had a hard time combatting the spread of Google's Android mobile OS around the world. According to research firm IDC, Google's Android held a 78% of all mobile operating systems shipped during the fourth quarter of last year, compared to just 3% for Microsoft's Windows Phone.

I've long maintained that Google gives Android away for free to original equipment manufacturers constitutes a massive advantage for Google over Microsoft. However, it appears that Microsoft might have finally awakened to the issues as well. A recent report from Bloomberg noted that Microsoft is dropping the licensing fee it charges its hardware partners for Windows by as much as 70%.

All this amounts to a full court press on the part of Nokia and Microsoft. Sure, Nokia's Android-based smartphone sounds like it's stabbing Microsoft in the back. However, in reality, Nokia is really using Android as a cheap way to layer as many of its and Microsoft's services into yet another cheap smartphone aimed at emerging markets. This fact, especially also considering Microsoft's licensing fee storyline, shows how far both Microsoft and Nokia are willing to go in order to grow their shipments.

Microsoft's Windows Phone still faces an uphill battle to be sure. But if these recent moves are any indication, it's finally a fight Microsoft's taking serious steps toward winning. And that should certainly be encouraging for its investors.