Netflix’s new deal with Comcast won’t be its last

The last two years have been a kind of "golden age" for streaming media disruptor Netflix (NFLX -3.87%).

After riding high and then enduring a few humiliating failures several years ago, Netflix has forged a new path forward, including its well-publicized push into original content. These recent wins have helped elevate Netflix and differentiate it from the growing crowd of Netflix-clones that have sprung up over the last few years, including Amazon.com's Prime Streaming Service.

Its improvements have proven a boon for in nearly every regard. Netflix's subscriber figures ballooned from around 23 million  subscribers at the end of 2011 to over 44 million members at year-end 2013. This has helped enrich Netflix shareholders as well. Since the start of 2012, Netflix's stock has surged some 512%, making it the single best performing stock in the S&P 500 during this time frame . 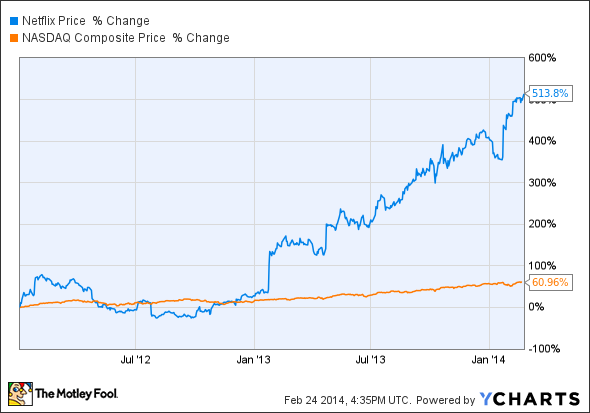 And, the recent deal struck between Netflix and cable powerhouse Comcast (CMCSA -0.40%) should help Netflix maintain its place as the dominant force in streaming today.

Netflix makes a deal
This past Sunday, Netflix and Comcast announced a new, "mutually beneficial" deal in which Netflix will now pay Comcast for direct access its network.

As Netflix's subscriber base has blossomed, so has the stress its streaming service places on the networks of companies like Comcast. Historically, Netflix has traditionally used data-delivery services to help push its service out to various Internet providers' networks. However, according to reports, Netflix's data provider firm Cogent had been experiencing increased difficulty with moving Netflix's service into Comcast's networks of late. In striking this deal, Netflix will now pay Comcast for direct access to its IP network, which should hopefully improve Netflix's ability to deliver its service to Comcast Internet subscribes at improved speeds.

The new normal for Netflix
Although this deal sounds thematically similar to the broader debate surrounding net neutrality, it's important to realize that's not the issue Netflix was dealing here.

Netflix has been pursuing similar deals for some time now. Netflix created a service it calls Open Connect, which enables companies to directly connect their ISPs to Netflix for free. Until the Comcast deal, Netflix had only been able to enlist smaller ISPs like Frontier Communications and Cablevision.

Comcast is the largest Internet provider in the US with more than 20 million subscribers  before accounting for its recently announced merger with Time Warner Cable. Netflix is one of the largest single drivers of Internet traffic as well, accounting for as much as one-third of all online traffic in the U.S. at peak viewing hours, and it appears that the unusual scale of providing consistently strong streaming quality to the scale at which Comcast operates grew to complex for Netflix third-party intermediaries to handle alone.

The financial terms of the deal haven't been disclosed by either party, so it's challenging to assess the dollar-and-cents impact this deal could have on Netflix shareholders.

However, as a deal that should help ensure Netflix's product remains as high quality as possible, this should certainly help maintain Netflix's place as one of the go-to sources of entertainment in our digital age. And that alone should be worth its weight in gold.