Please ensure Javascript is enabled for purposes of website accessibility
Log In Help Join The Motley Fool
Free Article Join Over 1 Million Premium Members And Get More In-Depth Stock Guidance and Research
By Daniel Gibbs - Feb 25, 2014 at 8:42AM

Offshore drilling contractor Ensco trades 16.9% off its highs following an earnings report in which the company reported record profits. This is due to fears surrounding the industry which do not seem to apply in the company's case. Ensco should be able to grow its revenues in 2014 due to its strong contract situation.

Offshore drilling giant Ensco (VAL) announced its fourth quarter and full year 2013 results on February 19, 2014. Overall, the results were quite impressive and showed substantial growth for the company on a year-over-year basis.

Despite the CEO's very optimistic comments, however, Ensco does operate in an industry that is plagued by fears of oversupply. However, most indications point to the current industry weakness being a short-term problem, and Ensco is fairly well positioned to ride out this weakness until the industry returns to its long-term growth trajectory. This has not protected the stock price, though, which is off significantly from the highs reached last year. This could offer a buying opportunity for investors.

The highlights
First, let's take a look at what the company reported:

Positioned well for weakening industry
One of the biggest concerns that investors have had about the offshore drilling industry over the past several months is that the previously red-hot industry appears to be slowing down. Since 2011, but particularly in 2012 and 2013, oil and gas companies were very strongly demanding the services of offshore drilling rigs in order to develop the enormous and numerous offshore resource deposits that they have found. So great was this demand that they wanted to contract more rigs than were in existence at the time.

Offshore drilling contractors couldn't keep up, and so they took the only option that was realistically available to them and began constructing more rigs. Unfortunately, late last year many oil companies saw their cash flows begin to become constrained. This resulted in project delays, causing demand for offshore rigs to drop. Unfortunately, this happened just before the large number of rigs that the drilling contractors started constructing during the boom period were scheduled to leave the shipyard.

While this has not led to a situation similar to what the shipping market currently faces in which dayrates are plummeting due to supply vastly exceeding demand, it has changed the industry dynamics from one in which there are too few rigs available to one that both Seadrill (SDRL) and Ocean Rig (ORIG) describe as "adequately supplied." This has caused some contractors to have difficulty securing new or replacement contracts for those rigs that become available this year.

Fortunately, Ensco is not likely to have this problem. The company has a very strong revenue backlog, which is essentially revenue that the company is guaranteed to receive due to its already existing contracts. The company's revenue backlog currently stands at approximately $11 billion. This would be enough for Ensco to operate for just over eight quarters at its current level. Of course, it doesn't work this way in practice because contracts start and end at different times and last for different periods of time, but this still provides a great deal of near-term security for the company's revenues. This revenue backlog is heavily front-loaded, meaning that the majority of it will come in the near-term rather than being spread out over time. In fact, more than 90% of Ensco's revenue outlook is already secured by contracts that it has in place. This means that the company doesn't have to desperately scramble to get new contracts to ensure that it has the money to pay its dividend or to achieve its projected growth. It also provides further confidence in the company's near-term stability.

Very reasonable valuation
At the time of writing, shares of Ensco are approximately 16.9% below the stock's 52-week high of $64.14. 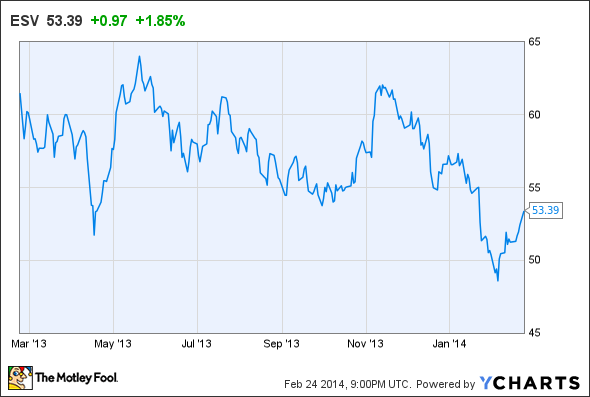 The primary reason the stock is so far off its highs is because of the already discussed fears surrounding the offshore drilling industry. While these fears are not unfounded, in Ensco's case they don't apply. This is how Ensco can have nearly guaranteed revenue growth over the next year and still trade with a trailing P/E of 8.8. The company provided a revenue outlook of 5% to 6% growth in 2014 over 2013 levels, 90% of which is backed by the company's already existing contracts. Provided that Ensco's costs don't increase at a rate that is out of line with this then the company's EPS should also grow going forward. This results in a lower forward P/E than the trailing P/E figure just mentioned.

Offshore drilling companies, particularly those with newer equipment, typically have relatively high depreciation and amortization costs. Because of this, the P/E ratio may not be the best ratio to use to value a company in this industry. Instead, we can use the EV/EBITDA multiple, which is capital structure neutral and provides a better measurement of the company's earnings before the depreciation deduction. In Ensco's case, the company's trailing EV/EBITDA is 7.05. This is still a relatively low valuation for a growing company with a 5.70% dividend yield.

Daniel Gibbs has a long position in SDRL. His research firm, Powerhedge LLC, has a business relationship with a registered investment advisor whose clients may have positions in any stock mentioned. Powerhedge LLC does not have any positions in any stock mentioned and is not a registered investment advisor. The Motley Fool recommends Seadrill. The Motley Fool owns shares of Seadrill. Try any of our Foolish newsletter services free for 30 days. We Fools may not all hold the same opinions, but we all believe that considering a diverse range of insights makes us better investors. The Motley Fool has a disclosure policy.