A recent research report about the electric-car maker is full of hope and hot air, but its targets are so far off as to be utterly meaningless.

But $320 a share, or $40 billion -- or any price at all when you think about it -- would be worth paying to reach a "utopian society," which is apparently the long-term opportunity available for Tesla: 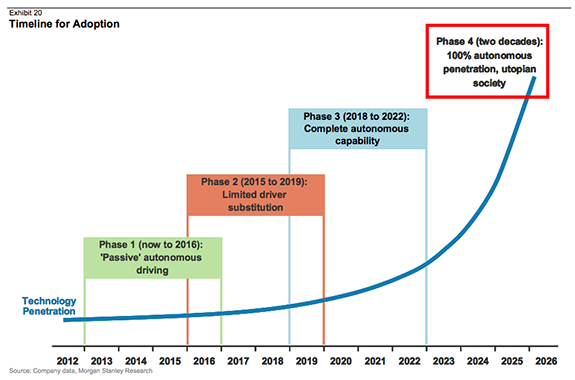 This chart, taken from Jonas' report and widely disseminated on Twitter thanks to eagle-eyed New River Investments portfolio manager Conor Sen, shows a path to glory for Tesla beyond simply owning the world of electric cars. This path isn't even connected to Tesla's efforts to build a battery "giga factory," for which Jonas can barely contain his excitement: "If it can be a leader in commercializing battery packs, investors may never look at Tesla the same way again. If Tesla can become the world's low-cost producer in energy storage, we see significant optionality for Tesla to disrupt adjacent industries."

While the report focuses on disrupting electric utilities, the "adjacent industry" highlighted in the chart above is autonomous vehicles, which is actually closer to Tesla's current mission than a wide-eyed quest to blow up the world's energy infrastructure that Jonas sees as possible. By 2026, we'll supposedly have a completely autonomous road network, which somehow leads directly to "utopian society." Apparently, the only thing standing between us and paradise on earth is the constant annoyance of having to press our own gas pedals and turn our own steering wheels. Save us, Elon Musk!

Optimistically, Jonas also anticipates that Tesla will ramp up its annual production to more than 1.1 million vehicles a year -- by 2028. That would drop Tesla's $320 share price and $40 billion market cap to a more reasonable valuation of approximately $36,000 per vehicle. That's a lot better than today's price, but it's still roughly four times the market cap per vehicle as Ford (F -0.46%) earned with a 2013 production run of 6.3 million vehicles. Of course, Ford isn't going to change the world by enticing everyone to switch over to battery-pack power and an automated road network. Only Tesla could possibly do that.

There are several huge fallacies at work with this sort of optimism. To believe that Tesla's opportunity is boundless in electric cars... and energy storage... and autonomous road networks, you also have to believe that from now to the point of mass adoption, no one else will ever effectively compete with Tesla. Alternatively, you can simply believe that Tesla will own so much of each market in the future that a $40 billion market cap today is small potatoes. But both of these beliefs require you to ignore the history of similar technologies and the ultimate value placed on the companies that led their development.

Ford didn't make the most technologically advanced cars in the world when the auto's popularity was exploding nearly a century ago; it simply made the most affordable cars that the average person could still enjoy driving. The Ford family kept the company private until 1954, but when it went public, Ford's inflation-adjusted post-IPO market cap reached roughly $32 billion. Its actual market cap today is roughly twice that, so early investors doubled their money in real terms (not counting dividends), but Ford was already producing nearly 2 million cars at that point. Ford's production didn't increase that much from 1926, when its Model T was the most popular thing on four wheels, to its 1956 IPO because other competitors quickly rushed in once the early hype died down and Ford couldn't again hold the public's interest in the same way.

The point here is that no company operates in a vacuum, especially when we're talking about massive multinational industries led by a few multibillion-dollar businesses. Tesla isn't the only company producing electric cars, and as the technology and infrastructure continue to mature, other major automakers will work harder to bring strong models to market.

Tesla isn't the only company working on next-gen batteries, either. That effort has been going on for decades, and Tesla's real innovation wasn't so much in developing something new but in making something old more efficient -- lithium-ion batteries have been powering consumer electronics for more than two decades. Nor is Tesla on the vanguard of driverless-car technology, as Google (GOOGL -0.61%) has been successfully demonstrating this technology for several years and could very well partner with major automakers to put its systems in all sorts of vehicles. If Morgan Stanley's Adam Jonas thinks that Tesla is on its way to driverless utopia, then why hasn't he already credited Google with planting its flag on that shore?

I'm a big fan of what Musk is doing with Tesla and his other ventures. I believe that a transition to clean energy, electric vehicles, and autonomous road networks would be immensely beneficial to human society and have written about the long-term benefits of this transition many times. I also believe that electric-car skeptics will ultimately be proven wrong, and the numbers back me up on this point -- electric cars are already more popular with consumers at a similar point after introduction than the earliest internal-combustion "motor wagons" were more than a century ago. But that doesn't mean I'm going to climb up and shout it from the rooftops that Musk is our savior and we should all buy, buy, buy regardless of any fundamental realities.

When analysts start talking about utopia, be afraid. These are supposed to be clear-eyed investment professionals, not acolytes of a revolution. Jonas could be serious -- but it's just as likely that Morgan Stanley is fishing for the last Tesla holdouts to dump its shares on before the stock comes back to reality.

The Motley Fool recommends Twitter. It recommends and owns shares of Ford, Google, and Tesla Motors. Try any of our Foolish newsletter services free for 30 days. We Fools may not all hold the same opinions, but we all believe that considering a diverse range of insights makes us better investors. The Motley Fool has a disclosure policy.