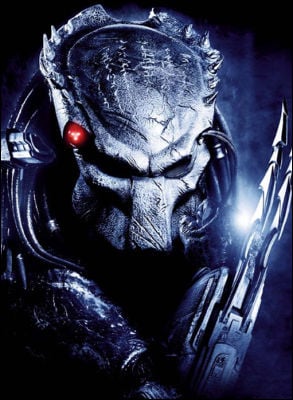 Remember this guy?  He's the alien hunter from the Predator movies. He had an array of tools that gave him a significant advantage over his human quarry. Thermal vision aided him when he hunted at night. Thankfully, aliens have not cornered the market on infrared imaging technology.

According to the Research and Market report, "Thermal Imaging Market-Worldwide Market Forecasts (2013-2018)," the thermal imaging market is expected to blossom from $3.5 billion in 2013 to nearly $6 billion in 2018.  So, how can investors get involved in this opportunity? Let's take a look at one of the leaders in the infrared market, FLIR Systems (FLIR).

FLIR produces a wide range of thermal imaging products and solutions for a variety of markets such as military, law enforcement, maritime, industrial, security, and personal use.

The FLIR company profile describes a near-bankruptcy in the late 90s, followed by the company's resurgence as a market leader under a new management team, led by Earl R. Lewis as CEO. He took the reins in late 2000 and implemented several fundamental changes for the company.

Lewis eliminated products with low profit margins to focus instead on high-profit products. He sought to improve operating efficiency by refining the production and distribution processes to reduce costs. Lewis also made cash the company's central focus to ensure funds were always available. With these changes, revenue grew year-over-year until 2012, but 2013 was challenging.

Should investors run and hide, or take on this stock as a long-term investment?

A closer look at 2013 results
Earlier this month, FLIR released full-year 2013 earnings, and the results were mixed.

According to the company's fourth-quarter 2013 conference call, FLIR has typically relied heavily on orders from the government. Unfortunately, orders from the DoD were down 51% in 2013. In addition, the surveillance segment was down 36%. Many surveillance customers rely exclusively on government contracts. The government shutdown of 2013 resulted in weaker demand for thermal imaging products, yet other business segments reported strong earnings for the year.

In the third quarter of 2013, Andy Teich, president and CEO of FLIR since mid-2013, announced a restructuring to "further enhance operating efficiency and profitability and to improve our internal execution with better communication, collaboration, and cooperation across the company." This effort resulted in nearly $26 million of one-time charges for the year, most of which happened in the fourth quarter of 2013.

The restructuring is not just a reaction to the weakness in government sales. It's a proactive move to rebalance the company. Over the last decade FLIR acquired numerous companies as part of its growth strategy. However, duplication and inefficiency crept in the door. Restructuring allows the company to reduce reliance on the government and significantly reduce the cost of doing business. Once the restructuring is complete, sometime in 2014, management expects to save in excess of $20 million per year. First year savings should pay the majority of the cost of restructuring!

There are more reasons the future looks promising. Remember the $355 million in cash flow earlier? That was a company record. In the fourth quarter, FLIR also repurchased 1 million shares of its common stock at an average price of $28.95 per share, plus raised the dividend. These moves indicate a confident management team.

What to watch
A key factor for growth is opening new commercial markets. FLIR is tapping into the Apple ecosphere. The FLIR One is a thermal imaging attachment for the iPhone 5 and 5s. This represents a huge opportunity for FLIR. Plus, FLIR managed to get the price under $350, which should be affordable for professionals and enthusiasts alike.

FLIR also announced the ThermoSite R Series infrared rifle scopes. The starting price is around $3,500, so it is not for everyone, but FLIR will likely find ways to make it cheaper, thus widening the market.

In conclusion
Should investors avoid this stock? I don't think so. 2013 was a rough year, but FLIR could come out stronger than ever. Watch to see if FLIR can successfully diversify its commercial line of products and continue to strengthen it's cash flow. I highly recommend adding FLIR to your watch list.