Please ensure Javascript is enabled for purposes of website accessibility
Log In Help Join The Motley Fool
Free Article Join Over 1 Million Premium Members And Get More In-Depth Stock Guidance and Research
By Leah Niu - Feb 26, 2014 at 11:33AM

Organic brands are on the rise; are you riding the wave? Here are five reasons to jump on this growing movement.

Americans are changing the way they look at food and personal care products. The move away from faceless corporations seems to be a trend that is gaining credibility and momentum. Organic food sales alone have penetrated the market with a compound annual growth rate of 16.5% from 1998 to 2010. Organic food sales grew at 16 times the rate of conventional food, after accounting for inflation. Companies like Hain Celestial (HAIN 0.94%) and Whole Foods (WFM) are benefiting from the trend. It looks like organic demand is here to stay and growing at a steady pace, so what are the five best reasons to buy into this market? 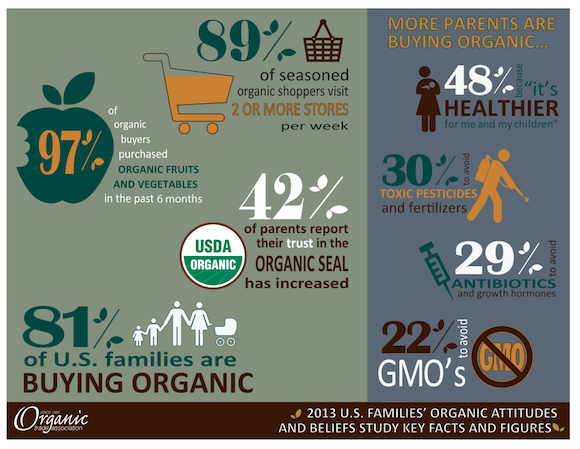 Embracing a positive attitude toward organic purchases, 81% of U.S. families say that they purchase organic food "at least sometimes." The majority of those surveyed are purchasing even more of these items than they did a year earlier. Not only have purchases increased, but awareness of the USDA Organic seal has also increased. This coincides with the production of certified sustainable goods jumping by more than 40% in 2012.

2) It's not just the U.S.
Europe, India, and Southeast Asia are embracing organics as well. In Europe, the organic market was up about 6% in 2012, and it's valued at about $31.5 billion. Germany was the largest European country to embrace the big O, with sales of about $9.7 billion in 2012.

India's  major cities are showing increased interest in organics as well. Organic sales in Bangalore, Mumbai, and Hyderabad totaled about $9.5 million in 2012. Southeast Asia is moving toward implementing regional organic standards by the end of 2015. Indonesia, the Phillippines, and Malaysia all already have organic labeling regulations documented.

3) The farm bill passed, finally
Funding increased for the National Organic Program thanks to the new farm bill. What does that mean for the market? Higher enforcement of organic standards, improved tech, negotiations for international trade, research funding focused on organic farming practices, and financial assistance for small farms in order to help them attain organic certification.

4) For the love of local
Jim Barham, an agricultural economist in the marketing services division of the USDA, estimates that local food market sales were about $5 billion in 2008. He went on to say that he expects that figure to double in today's market.

While local doesn't equate to organic, it does represent the growing market of conscious consumers who prefer to know what their food is actually made of.

Whole Foods may have disappointed the market with its most recent earnings, but that's nothing to worry about as the GMO-snubbing, organics boasting grocery giant has plenty of room to grow. Comparable-store sales went up 5.4%, with a 19.5% increase at stores that were fewer than two years old. Furthermore, Whole Foods is planning rapid expansion as it has 107 stores in development and expects to cross the 500-store mark in 2017, all of which could spell out the potential to buy the organic giant on the cheap, for now.

Don't miss out on the growing organic trend, as it will prove to be a solid investment in years to come. This market is on the rise both here in the US and abroad, legislation is starting to support the organic movement here at home, and local food hubs are growing. Naturally-minded companies like Hain Celestial and Whole Foods benefit from embracing this growing consumer base, isn't it about time you do the same and put the organic trend to work for you and your portfolio?