As the team prepares to take on the Clock King, a Fool explains how the show’s creators are developing the franchise -- and setting it apart from “Marvel’s Agents of S.H.I.E.L.D.”

When Arrow returns from hiatus tonight, fans will not only see the titular character square off against the Clock King. We'll also see the extended team taking practice in the "Arrow Lair," says co-creator Marc Guggenheim in the "producer's preview" below.

I wasn't exactly pleased to hear that. The "Arrow Lair?" That sounds far too much like history most comics fans would like to forget. Fortunately, Arrow's creators are not only aware of this, but they're also developing the franchise in a manner much different than Walt Disney (DIS 0.85%) is pursuing with the superhero-light Marvel's Agents of S.H.I.E.L.D.

A brief history of the metamorphosis of a comic book hero
More on the differences in a minute. First, let's review where we've been, and why the mere mention of the phrase "Arrow Lair" sent my fanboy side into a tizzy.

At one time, DC Comics pitched Green Arrow -- the character upon which Arrow is based -- as a swashbuckler who was like Batman in almost every respect. That character, who first appeared in November 1941 in the pages of "More Fun Comics" #73, went on to:

They even shared a similar civilian lifestyle. What billionaire playboy Bruce Wayne was to Gotham City, billionaire playboy Oliver Queen was to Star City. Green Arrow was, in effect, Batman with a bow and arrow -- right up until writer Denny O'Neil and artist Neal Adams changed everything. 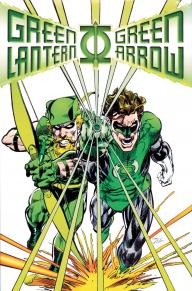 Adams and O'Neil not only retooled the character's look but also his backstory and attitude. He'd lose his billions in a swindle and go on to become a defender of the poor, battling society's ills as much as crooks. They'd later team him with Green Lantern knowing Oliver's seething thirst for justice would challenge his friend's strict adherence to the law.

In short, the Green Arrow they created -- with notable refinements from the likes of writer-artist Mike Grell in the 1980s and Andy Diggle more recently -- helped form the character Stephen Amell plays on screen. A hero driven by something more than vengeance.

Now, here's the better news ...
Guggenheim and co-creators Andrew Kreisberg and Greg Berlanti know this all too well. In fact, they know the history better than any of us. In creating Arrow, they've taken deliberate steps to set their hero apart from anything else we've seen or read.

Yet I'd say their plan is also bigger than that. The Clock King isn't merely an antagonist. He's Felicity's first real foe as expressed in the Arrow narrative, allowing the creators to further develop Emily Bett Rickards' character as an independent heroine.

From what I can tell, it's a similar formula to what we saw in episode 206 ("Keep Your Enemies Closer"), in which David Ramsey's John Diggle is forced to work with arch-nemesis Deadshot. They'll team up again in a forthcoming episode that reveals the team of reluctant villains known as The Suicide Squad. A spinoff wouldn't be out of the question.

Hatching franchises in the 'Arrow Lair' as S.H.I.E.L.D. watches, and waits
We've come to expect as much from the Arrow team. Episodes 208 and 209 brought us Grant Gustin as Barry Allen and a pilot featuring his alter-ego, The Flash, is in development as I write this. No doubt a pleasing series of events for Time Warner (TWX) and Warner Bros., which need new franchises in order to grow revenue.

Agents of S.H.I.E.L.D. is a different beast. Save for Clark Gregg's Phil Coulson, none of the main characters comes off as an independent hero or heroine capable of birthing an entirely new franchise. J. August Richards' ongoing transformation into the cyborg Deathlok holds some promise, but even that storyline seems destined to be contained inside the world of S.H.I.E.L.D.

Whereas Arrow's protagonists actively shape and change the superhero world in which they operate, S.H.I.E.L.D.'s agents are observers who reflect the Marvel Universe as it unfolds before them. Not necessarily a bad premise, but also infertile ground for spinoffs and special projects.

Now it's your turn to weigh in. How do you rate the current season of Arrow? Do you see the show breathing life into other franchises? Leave a comment in the box below to let us know what you think, and whether you would buy, sell, or short Time Warner stock at current prices.

Tim Beyers is a member of the Motley Fool Rule Breakers stock-picking team and the Motley Fool Supernova Odyssey I mission. He owned shares of Time Warner and Walt Disney at the time of publication. Check out Tim's web home and portfolio holdings or connect with him on Google+, Tumblr, or Twitter, where he goes by @milehighfool. You can also get his insights delivered directly to your RSS reader.