Please ensure Javascript is enabled for purposes of website accessibility
Log In Help Join The Motley Fool
Free Article Join Over 1 Million Premium Members And Get More In-Depth Stock Guidance and Research
By Maxx Chatsko - Feb 26, 2014 at 10:54AM

Synthetic biology pioneer Amyris discussed its full-year 2013 results after market close. Here's what investors need to know about 2013 and what you can expect from operations in 2014.

What do investors love about industrial biotech company Solazyme (TVIA)? It offers the potential for tremendous growth -- from revenue of nearly $50 million in 2013 to more than $1 billion in the next several years -- and possesses a truly disruptive technology platform that can address a range of issues surrounding the production of various specialty and commodity chemicals. Solazyme has several potential milestones ahead of it in 2014 as it starts and subsequently ramps production at its first two commercial scale facilities, has a stable of world-class partners, and should become cash flow positive and profitable by the end of 2015.

Oddly, while Amyris (AMRS 19.68%) offers similarly amazing potential in the next several years, it doesn't garner the same attention or praise as Solazyme. It, too, has a disruptive technology platform, has attracted partners such as Total (TTE 0.54%) and International Flavors & Fragrances (IFF 1.75%), and expects to achieve cash flow positive and profitable operations by the end of 2015. 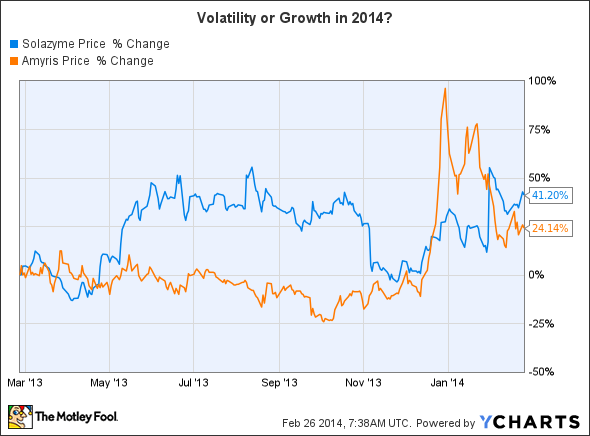 It has drawbacks, such as a less attractive balance sheet and less production capacity than Solazyme in the short term, but investors shouldn't be so quick to dismiss the opportunity outright in favor of the renewable oils company. The argument for which offers the best opportunity is immaterial to the fact that both can return substantial gains to your portfolio by the end of the decade (and beyond). What do you need to know about Amyris' 2013 and what can you expect from the company in 2014?

The quick and dirty on 2013
You can reference the company's press release for the full financial information, which isn't so important for a developmental-stage company anyway. What matters for Amyris is execution, especially considering its early obstacles during ramp-up, and the company hasn't disappointed lately. The company's second-generation yeast strains for producing its renewable hydrocarbon and building block molecule farnesene offer microbial productivity -- one of the three metrics optimized for economical production of all industrial biotech platforms -- that was not theoretically possible with first-generation strains. That's a testament to the company's tremendous screening capabilities and should allow the current microbes to better outgrow potential contaminate microbes introduced from feedstock loading, which plagued operations in the past. The second-generation strains are enabling the company's commercial scale facility in Brotas, Brazil, to produce about 1 million liters of farnesene each month at production costs of $3.50 per liter -- well below production costs of $12 per liter achieved at start-up of the biorefinery. That's well below the roughly 3.3 million liters per month needed to achieve nameplate capacity of 40 million liters per year. Additionally, Amyris will not produce 12 million liters of farnesene (the current annualized rate) during 2014. It will instead leave sufficient scheduling flexibility to focus on optimizing the production of additional molecules, such as flavor and fragrance molecules for Firmenich and International Flavor & Fragrances. The company can still produce enough farnesene to fulfill its contractual obligations (at the moment) -- and do so during times when electricity costs are lowest -- but it nonetheless limits revenue potential in the near term.

At the request of partners and customers, Amyris will not give further updates on per-unit production costs or volumes. That will bum out most investors and analysts, but you may find solace in the fact that the company maintained an average selling price of $7 per liter for 2013. It may not be absurd to think Amyris can hold that number in 2014, either, with production from Brotas roughly broken into thirds between squalane (a high-value emollient), flavor and fragrance molecules (high-value consumer applications), and a miscellaneous group of lower-margin products including fuels, lubricants, and other chemicals.

Aside from production milestones achieved in 2013, Amyris formed a dedicated fuels joint venture with Total and advanced development agreements with various flavor and fragrance companies, which are expected to contribute nearly $20 million per year in collaboration revenue for the next several years. Total and Amyris have agreed to a new five-year research and development agreement to further optimize the company's production process, which will alleviate costs for Amyris and have positive benefits for production costs of farnesene for non-fuel applications as well. The agreement could potentially lead to Total's commitment to construct a dedicated production facility for fuels, pending development progress, regulatory approvals of renewable fuels, and financial situations.

What to expect in 2014 and beyond
Amyris won't disappoint in growing revenue this year compared to 2013. Take a look at final results from last year and guidance for 2014.

Brotas is expected to produce $300 million-$400 million in renewable product revenue by the end of 2016. Meanwhile, total revenue from renewable product sales and collaborations is expected to reach $100 million-$115 million this year, which will include $4.5 million (same amount as collaboration payment in table above is coincidence) of product sales made in 2013 but not recognized during that period. Those sales are expected to contribute $10 million-$15 million in positive cash margin, too. At the same time product sales are increasing, Amyris is guiding for operating expenses to fall to $80 million-$85 million this year. That's a giant improvement over previous and unsustainable levels in recent years -- something investors should note.

Simply put, the updates provided by management on the recent conference call were all quite positive for the short-term success of Amyris. Ramp-up may occur at a slower pace than investors feel comfortable with, especially when compared to the 12-18 months expected for Solazyme's first commercial-scale facilities, but the combination of experience gained at Brotas and next-generation yeast strains should allow for future biorefineries to be ramped much faster than the 36 months guided for Brotas.

Foolish bottom line
Please note that I am not saying Amyris is necessarily a better buy, will have a better 2014, or has a brighter future than Solazyme. That may or may not be true, but it is not the argument being made. Rather, I am reminding investors that the impressive growth opportunity presented by Amyris -- revenue could jump from $50 million in 2013 to more than $1 billion by the end of the decade -- parallels that of Solazyme in many ways. However, there is a disparity between that potential and level of investor interest in the two. I would encourage all to take a deeper look into Amyris and not to be so dismissive of one company in favor of the other. An honest evaluation of the synthetic biology industry points to the inevitable fact that investors will enjoy multiple wins.

The Motley Fool recommends Total SA (ADR) and owns shares of Solazyme. Try any of our Foolish newsletter services free for 30 days. We Fools may not all hold the same opinions, but we all believe that considering a diverse range of insights makes us better investors. The Motley Fool has a disclosure policy.