Stocks with exposure to the trucking industry like Cummins, Navistar, and Paccar have surged over the last year or so, and here is why.

If there is such a thing as an investing based game show, then heavy engine manufacturer Cummins (CMI 1.92%) is a strong candidate for a trivia question. The stock is up over 30% in the last year, after recording flat revenue and an operating income decline of 6.7% in 2013.  In addition, customers in its truck engine segment Paccar (PCAR 1.58%) and Navistar (NAV) (also a rival) are up around 40% and 50% respectively. What exactly is going on, and can it continue?

Cummins, Paccar, and Navistar
The answer to the trivia question above isn't as obvious as it may seem. A surging stock market has certainly helped pull these stocks higher, but they also rose for some stock-specific reasons. The main thing they have in common, is that the outlook for the North American trucking market is better than in 2013. Investing Fools will already know how aluminum producer Alcoa (AA) views the global heavy truck and trailer market in 2014. While, Alcoa's forecast of 1%-5% growth in the segment might not look exciting, it's a lot better than the double-digit declines recorded in 2013.

Starting with Cummins, a breakdown of 2013 segmental earnings before interest and taxes, or EBIT. 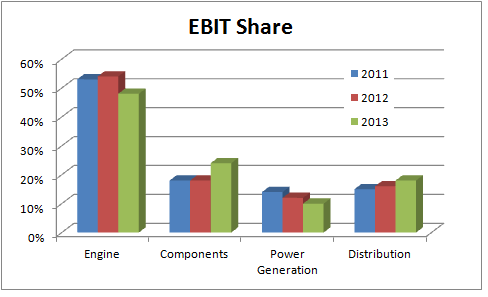 Its engine segment manufactures diesel and natural gas engines for heavy- and medium-duty truck manufacturers. Paccar is its largest customer, and represented around 12% of its total company sales in 2013. Cummins also has long-standing heavy-duty engine supply agreements with Navistar and Volvo, and supplies mid-range engines to Daimler, Navistar, and Ford. In addition, Chrysler is a key customer for its light-duty engines.

The bad news is that Cummins predicts that industry on-highway engine units will actually decline overall in its key geographic markets in 2014. However, the good news is that it generates around 60% of its sales from the U.S. and Canada, and its NAFTA region heavy- and medium-duty units are forecast to grow 8.3% and 7.1%, respectively. For reference, Cummins currently generates 27%, 22%, and 13% of its total engine sales from heavy-, medium-, and light-duty engines, respectively. 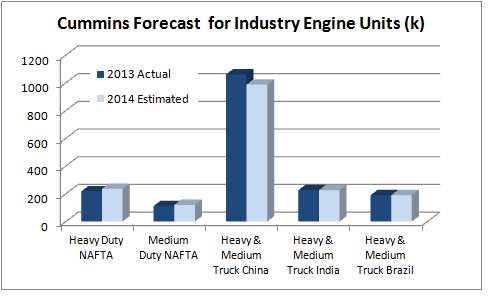 Navistar's improvement has come about partly due to the anticipation of better market conditions, but it's also due to some stock-specific issues. Navistar lost market share to Paccar in recent years, partly as a consequence of the troubles it had with its exhaust gas recirculation technology that fell foul of emission standards. However, Navistar has appreciated on the hopes that its cost-cutting measures (including cutting plants and buying engines from Cummins) will result in a turnaround at the company.

First, according, to the management on the conference call, 2.5% (of the mid-point of guidance of 6% revenue growth) will come from the acquisition of distributors, 2% is due to emissions regulations and new products, only 1% from market growth, and the rest from market share gains and pricing.

Second, its revenue growth in the first half is forecast to be "closer to 4%" with the "second half of the year closer to 8%". Given, that the first quarter is likely to be the low-point, Fools should not panic if the first quarter comes in at a slower pace than the 4%-8% forecast for the year.

Third, certain areas of its business remain weak. For example, weakness in emerging markets hurt power generation sales in 2013, and its forecast for power generation sales is for a range of -3% to 3%.  Moreover, the engine segment growth is only expected  to grow by 4%-6%, because demand from areas like mining and marine continues to be weak.

The bottom line
On a positive note, a combination of favorable market conditions (emissions regulations and some North American trucking growth) and its own execution (increasing truck engine market share and acquiring distributors) means that analysts have earnings per share growing 12% and 23% for the next two years.

On the other hand, there are no major changes in emission standards in 2015, so Cummins can't always rely on regulations to spur growth. Also, a lot of its growth is coming from internal execution and winning market share, trucking is always a cyclical industry, and its power generation segment looks weak. On a forward P/E ratio of 16.5 times earnings, the stock looks fairly valued.

Why Shares of Navistar Are Soaring Today
349%