Wal-Mart is trying to make good on the job front, but not in a way you'd expect.

In late January, Wal-Mart (WMT -0.10%) announced that it would invest $10 million to spur innovation and support American manufacturing. This move could win back some of the retail giant's naysayers, but the company has a long way to go to make up for a number of issues with employee relations. The retail giant is going to have to try pretty hard if it wants to keep up with its employee loving competitor, Costco (COST -1.85%).

Wal-Mart has been working hard to change how the world sees it, making moves ranging from addressing supply chain issues to partnering with the Environmental Defense Fund to cut its emissions. Now it's putting more money into boosting U.S. manufacturing, and it's banking on this investment to distract shareholders from declining comparable store sales, which have fallen within the last three quarters.

What has Wally World done for you lately?
Wal-Mart has committed to buying an additional $50 billion in American products, ten times as many as it does today . The company estimates that this pledge will result in buying an additional $250 billion cumulatively over the next 10 years. That could amount to about a million more American jobs. Is this enough to wipe the employee relations slate clean for the retail giant, though? Not likely.

Wal-Mart is one of the largest employers in the United States. Being adamantly anti-union, the company has instead opted for an "open door" policy in which employees can air their grievances with management. This policy has worked to keep costs down but has also kept employees disgruntled. Wal-Mart employees start at the same base salary as their union counterparts, but after about two years it's associates earn about 25% less . Turnover is high, leaving organized labor in the dust. This new investment in innovation works well to boost jobs in U.S. manufacturing, but it leaves its associates close to or below the poverty line.

Why should you care?
Employees are the backbone of any company, and their satisfaction should be of great concern to any company focused on becoming more sustainable. Ignoring the basic needs of their employees and laying off more than 2,300 workers when sales increased a year earlier just doesn't sit right with many Americans. In addition, there is a distinct correlation between union membership rates and the middle-class share of income, as seen here. 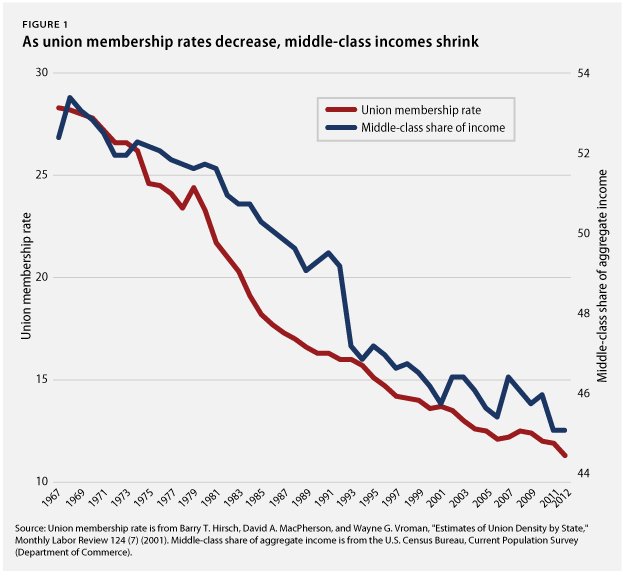 What should shareholders take away from this?
It no secret that one of Wal-Mart's greatest competitors, Costco, is known for its employee satisfaction. The warehouse chain seems to truly care about its employees, paying them an average of $20.89 an hour. Costco, in its 30-year history, has never had significant labor disputes. Being second in retail, just behind Wally World, Costco's sales have grown 39% and its stock has doubled since 2009. Craig Jelinek, the warehouse retailer's CEO, believes that "people need to make a living wage with health benefits." He has also been quoted stating that Costco's employee satisfaction tactics "puts more money back into the economy and creates a healthier country. It's really that simple." It seems that the wholesale club has figured out a way to grow without denying it's employees things like a living wage.

Wal-Mart's wholesale equivalent, Sam's Club, on the other hand, has been looking to cut overhead wherever it can. During the recent lay-off stint, the warehouse chain had to let go a number of salaried managers, all in the name of lower costs. Sam's Club pays its associates an average of $12.67 an hour, but boasts about 3.6% cheaper costs for its customers. Wal-Mart is taking a huge risk by only looking at the price customers are willing to pay. Ignoring the cost of disgruntled employees, high turnover, and ineffective stakeholder engagement puts the company and its shareholders at risk.

What's love got to do with it?
Perhaps Wal-Mart could take a step back, simplify it's job growth intentions, and solve its employee satisfaction and engagement issues in house before sponsoring job growth down it's supply chain. Shareholders and potential investors beware: Wal-Mart is creating more jobs, and if the new hires are treated anything like the old then it's going to be a bumpy ride.