Tile Shop posted strong results for its fiscal fourth quarter. However, after jumping so high in response, is the stock still an attractive investment, or should the Foolish investor consider Lumber Liquidators or The Container Store?

The Foolish investor might be asking himself or herself what to do about Tile Shop Holdings (TTSH 0.24%) after watching the stock soar 14% on strong earnings on Feb. 21 and another 4% between Feb. 24 and Feb. 25.

Over the past year, the company's shares have jumped around between $10.05 and $30.88. Now though, with shares approaching $16 on strong earnings, is the company ready to surge through the roof, or is now an opportune moment to take some cash and run?

Earnings were alright but not great
For the fourth quarter of the company's 2013 fiscal year, management reported revenue of $57.8 million. This represents a 25% jump compared to the $46.2 million the company reported in the year-ago quarter and fell in-line with analyst estimates. In its release, the company highlights that an increased store count contributed nearly 60% of the jump in sales, but the company also benefited from a 10.1% rise in comparable-store sales.

In terms of profitability, though, results weren't as strong. For the quarter, Tile Shop reported net income of $1.4 million compared to a previous net loss of $35.8 million. On a per-share basis, this means that results rose from -$0.84 to $0.03, missing estimates by a penny. At first glance, this looks nice, but upon further investigation, shareholders shouldn't be terribly impressed.

Despite seeing revenue soar, Tile Shop saw its costs rise even quicker. For instance, the company's cost of goods sold rose to 31.2% of sales compared to the 27.3% it reported in the year-ago quarter. Meanwhile, its selling, general, and administrative expenses jumped from 56.5% of sales to 63.6%. In fact, the only major improvement the business saw was in its one-time expenses.

Take the past three years, for instance, and we see that Tile Shop's rising revenue is the rule rather than the exception. From 2010 through 2012, the specialty retailer saw its revenue climb 35% from $135.3 million to $182.7 million. While this strong growth is nice to see, it has come with considerable trade-offs.

Instead of growing at a pace that allows a company to generate profits, Tile Shop has elected to grow at any and all cost. During this three-year time frame, the business has seen its net income fall from $29.7 million to a net loss of $46.9 million.

In all fairness, most of this decline is attributable to one-time expenses like those discussed above, but if you remove them and look solely at the business' operating income, the results are still disappointing. Unlike revenue, which rose considerably, the company's operating income only increased by 12% from $30.7 million to $34.4 million. 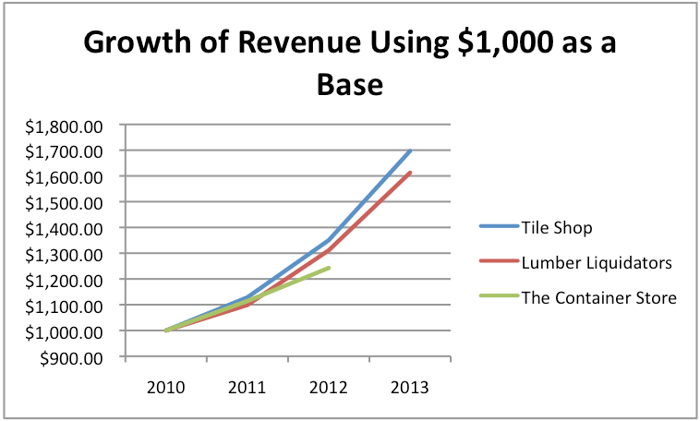 Unfortunately, The Container Store has yet to publish its 2013 fiscal results, but Lumber Liquidators reported that it grew its top-line results a whopping 23% to $1 billion for the year. On a full-year basis, this jump in sales is only slightly worse than the 25% rise to $229.6 million reported by Tile Shop.

Based on top-line growth, it's clear that Tile Shop's results are better than its peers, but this cannot be said of its profitability. Over the past three years, Lumber Liquidators has done unbelievably well in turning rising sales into rising profits.

The Container Store, on the other hand, hasn't been as fortunate. During the past three years, the business reported consecutive net losses. However, each year the company saw its net loss narrow considerably, eventually falling from -$45.1 million to -$0.1 million. As opposed to Lumber Liquidators, which saw its costs decline in relation to sales, The Container Store's improvement has been driven by smaller impairment charges each year.

Foolish takeaway
Based on the performance of Tile Shop in its most recent quarter, it's difficult to say that the business did poorly, but it's clear that its results could have been better. Moving forward, it's possible that Mr. Market's recent enthusiasm for the company could pay off, but a safer opportunity to delve into further might be Lumber Liquidators. Yes, the business is growing at a slower pace than Tile Shop, but the company's continuously improving profitability might just make up for it.