What drove the Netflix-Comcast deal? Comcast's Time Warner Cable purchase, the overturn of net neutrality - or something much simpler?

Netflix (NFLX 1.09%) announced Sunday an agreement to pay Comcast (CMCSA -1.16%) for direct access to the Internet service provider. The news inspired a flurry of headlines questioning the timing of the deal around two hot-button issues: net neutrality and Comcast's purchase of Time Warner Cable (NYSE: TWC). What does the new deal mean for the companies involved?

Financial details of the deal weren't disclosed, but it does carry a multi-year term that keeps Comcast from hiking the price as Netflix gains more streaming customers. Netflix has a multi-tiered and complicated delivery method for its streaming content, but part of this deal has involved Netflix paying middlemen companies to connect the service to Internet service providers, or ISPs. The Comcast deal would cut out those middlemen. According to the Wall Street Journal, Comcast won't allow Netflix to place its own servers at the cable company. Comcast will instead connect to Netflix's servers at third-party data centers.

Comcast customers will receive improved Netflix streaming. But why was this deal made now? Was it because of the recent net neutrality court decision? Or Comcast's bid for Time Warner Cable? Or did Netflix simply cave to a long-term standoff over direct access?

Netflix has tried to avoid paying ISPs for direct access and instead used middlemen to make the connection. But the middlemen have had trouble keeping up -- especially during usage surges that come during the release of original Netflix content, such as the new season of House of Cards. Netflix doesn't want to make streaming customers unhappy with slow or unreliable service. Domestic streaming has become the core of Netflix's business, accounting for 63% of total revenues in the fourth quarter.

Comcast's scale means that Netflix is likely paying less for direct access than for the middleman services. And the direct access provides better throughput, which passes on to the consumer as better quality. So Netflix potentially saves money while appearing to save the day.

Netflix has tried for years to convince the larger ISPs to grant the company free direct access -- as an added incentive for potential subscribers. But that argument fell on deaf ears. So a deal like Comcast's was bound to happen. And even without Time Warner Cable added to the fold, Comcast is the largest Internet and cable provider in the United States with over 19 million high-speed Internet subscribers in the fourth quarter.  Time Warner Cable had about 11 million residential Internet subscribers in the same period.

But why would Comcast prove eager to make this deal?

What's in it for Comcast?

Besides the payments the company will receive from Netflix, Comcast wants to attract more Internet subscribers because that's the best retaining segment. And boasting an improved Netflix could lure in said subscribers. 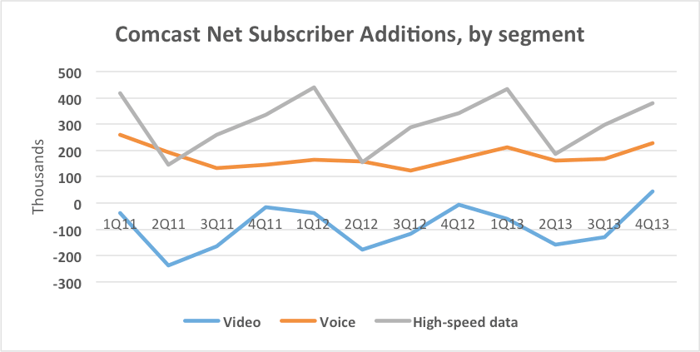 The video subscriber trend looks unhealthy while voice is at least maintaining. But Comcast wants to take on Time Warner Cable's business, and the video subscriber losses look even worse on that side while the Internet segment again provides the most stability.

Providing Netflix with direct access will allow Comcast to (somewhat technically inaccurately) boast that subscribers will have access to a streaming service with improved quality and speed. And the additional customers have the potential to offset some of the video subscriber losses -- some of which might result from cord-cutters turning entirely to streaming services such as Netflix.

Why make the deal now?

The timing raised eyebrows due to Comcast's desire to buy Time Warner Cable, a deal that could still fall through without the necessary regulatory approval. But the Wall Street Journal reports that Netflix and Comcast have conducted serious talks about a deal since early this year and Comcast simply came forward with an improved offer.  So the Time Warner Cable acquistion likely wasn't a factor on Netflix's side of things.

Netflix and Comcast's deal also kicked back up controversy surrounding a net neutrality-related federal appeals court decision last month. The court overturned parts of a ruling related to a battle between Verizon and the FCC, a decision that essentially made it possible for ISPs to run certain services faster or slower, but only if the companies disclose the action to consumers.

But net neutrality doesn't apply in this situation. Netflix was already using -- and paying -- a third party to connect to Comcast. And now Netflix will simply pay Comcast. This wasn't a case of Comcast purposefully handicapping Netflix streaming to cut a lucrative deal or earn back some video subscribers. It's two companies acting out of financial best interest and the potential for some celebratory public relations spinning.

Netflix and Comcast have entered into a mutually beneficial relationship. The former cuts out middlemen, potentially saves money, and offers an improved service to some customers. And Comcast receives a new payment and bragging rights. Often big, complicated news stories boil down to one basic principle: it's all about the money.

Brandy Betz has no position in any stocks mentioned. The Motley Fool recommends Netflix. The Motley Fool owns shares of Netflix. We Fools may not all hold the same opinions, but we all believe that considering a diverse range of insights makes us better investors. The Motley Fool has a disclosure policy.

Netflix Originals: Why ‘Hemlock Grove’ May Be the First to Get Canceled