SolarCity's recent quarterly report gave the market much to celebrate.

SolarCity (SCTY.DL) recently reported fourth quarter earnings that demonstrate the company is firing on all cylinders.

For the quarter, revenue was $47.3 million, up 87% year over year, while total megawatts deployed was 103 MW, up 115% year over year, both numbers exceeding expectations. While SolarCity delayed complete 2013 GAAP reporting until March 3, the market liked what it heard and bid the stock up to new 52-week highs.

Superb execution
SolarCity's execution has been superb. The company is just grabbing market share left and right from competitors. Last year, SolarCity's market share was 19% of the U.S. residential solar market -- it's now 32%. 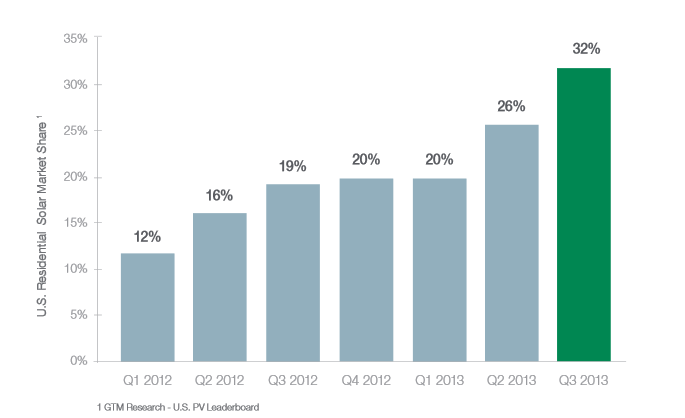 With that larger market share, SolarCity is realizing greater economies of scale and more savings. In 2013, the company reduced cost per watt by 30%.

The lower costs are helping SolarCity grow faster, which in turn is boosting its stock price.

Another positive trend is that distributed solar will be more competitive going forward. Distributed solar accounted for 9% of all first-half 2013 U.S. new electricity generation.

That percentage should only increase this year because wind and natural gas, which currently make up the majority of new U.S. electricity generation, will likely be more expensive than last year. Wind costs will be higher because the generous 2.3 cents per kilowatt hour wind tax credit expired at the end of 2013, while many market participants expect natural gas to be range-bound between $4 to $5 in 2014 versus the $3-$4 level in 2013.

Lastly, Tesla's (TSLA 0.08%) recent strength should help SolarCity as well. Because Elon Musk owns a significant part of both companies, any battery breakthroughs that Tesla achieves will likely to flow to SolarCity. Some of Tesla's technology is already showing up in SolarCity's energy storage product, DemandLogic. In Tesla, SolarCity has a competitive advantage that no other solar company has.

The bottom line
So far, SolarCity has executed very well. The company is grabbing market share, reducing costs, and accessing low-cost capital through securitization. If it can continue, SolarCity has a lot more growth ahead of it. Solar finance companies may be the new electric utilities of the future.

Initial data shows that most people are more likely to lease rather than buy solar panels. In 2012 and 2013, over two-thirds of residential installations in the California Solar Initiative, the largest solar incentive program in the United States, were third-party owned. For those people who do not own their solar panels, a company like SolarCity is the electric company.

Looking forward, SolarCity is very optimistic about the future. The company expects to be cash flow positive in 2014, and to have 475 MW to 525 MW deployed.

The company is on track to be on one million rooftops by 2018.

SolarCity is currently benefiting from a positive feedback loop where growth increases the stock price, the rising price lowers the cost of capital, and the lower cost of capital drives growth. Because the end markets are so big and sentiment is so bullish, this cycle could continue for a while yet.