Investing in one of these companies should prove to be rewarding, but which one?

The snack food industry includes some companies that have been delivering great results and are also expected to grow well. Moreover, consumer spending in U.S. has been increasing, rising 0.7% for the month of December. Also, hopes for 2014 have been on the rise since global retail sales grew 5.4% for the three months through November. In order to ride this uptrend, one should select the most profitable company to maximize investor gains.

One of the most interesting players is J&J Snack Foods (JJSF 0.10%), which has been a great company to watch. Not only did the company perform well, it also provided reasons to believe in its future, as indicated by its last updated outlook.

Reasons to believe
The acquisitions of Kim & Scott's Gourmet Pretzels and California Churros enabled J&J Snack Foods to enhance its pretzels and churros operations, respectively. Hence, revenue from these categories surged by 20% and 22%, respectively, for fiscal 2013.

Also, the snack maker is focused on widening its product portfolio and plans to expand its footprint. Therefore, J&J recently acquired New York Pretzel, which allows it to offer a wide variety of pretzels to its customers in the Northeast region.

On the other hand, Mondelez International (MDLZ -0.68%) is having a tough time as biscuit demand in China has weakened and coffee prices have declined. These factors affected its revenue in the last quarter. Despite the problems that the company faced, Mondelez posted a top-line increase of 2% over the prior year's quarter. Also, the company has been trying to expand its reach in the emerging markets, which should increase its revenue further. For instance, it recently announced a plan to invest approximately $200 million in India in order to build a large chocolate manufacturing plant.

Stock price performance history
Both J&J Snack Foods and Mondelez International have performed equally well in terms of providing returns to their investors over the last year. However, peer TreeHouse Foods (THS -0.36%) and Bridgford Foods have not been able to match up to the two players in terms of stock price, which is shown in the chart below: 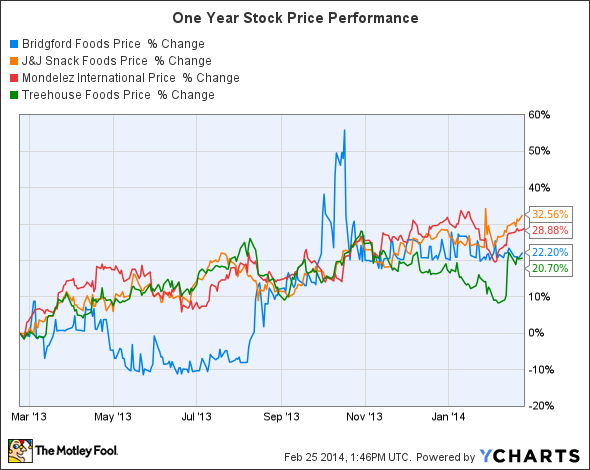 Nonetheless, both the players have been good performers, providing returns of more than 20%. With stock price appreciation of 22.2%, Bridgford Foods has performed remarkably well. This is mainly because the company increased the price of its products and expanded their distribution. Also, it entered into a distribution deal with Golden Flake Food. Moreover, its growing relationships with Wal-Mart and Dollar General should prove to be beneficial.

TreeHouse has also provided a return of 20.7%. It has been trying to grow by acquiring other businesses. After strengthening its mayonnaise and salad dressing division last year, through the acquisition of Cains Foods, it made another acquisition. In October last year, TreeHouse bought Associated Brands which makes powdered beverages and specialty teas. The company now plans to expand the specialty tea division which will attract health conscious people. Therefore, its future prospects look bright.

Takeaway
All the companies have been increasing their top lines through various means. J&J Snack Foods and TreeHouse Foods have resorted to an acquisition strategy, whereas Mondelez has been strengthening its presence in the emerging markets. Bridgford, too, has made a number of efforts to grow such as expanding its product lines alongside its distribution networks. Hence, investing in any of these food providers should be rewarding.