Please ensure Javascript is enabled for purposes of website accessibility
Log In Help Join The Motley Fool
Free Article Join Over 1 Million Premium Members And Get More In-Depth Stock Guidance and Research
By Leah Niu – Feb 26, 2014 at 11:25AM

Mattel partnered with Sports Illustrated to have Barbie appear on the cover of this year's swimsuit edition. However, this stunt won't be enough to make the toy maker relevant in the changing market of play.

Things aren't looking too great for traditional toy makers like Mattel  (MAT -0.66%) and Hasbro  (HAS -0.10%). This past season, both play-based giants saw dismal fourth-quarter US sales. The face of play has been changing in recent years, as evidenced by the growth of youth electronics and falling sales for action figures and Barbie. So, what do "interaction figures" and "phygital " (technology that bridges the physical and digital worlds) play have to do with your portfolio and keeping Mattel and Hasbro relevant?

Kids these days
Play isn't what it used to be, as our kids live in a digitally ubiquitous world. From screen time to smart boards, kids these days have greater expectations for what play can and should be. This trend has affected the toy market substantially. U.S. traditional toy sales fell by about 1% (including a 6% drop in the action figure segment), while youth electronics sales grew by 18%, according to NPD, a market research firm .

Out with the old
Video game consoles have been changing the face of play away from the traditional, where kids will generally use their imaginations to create original story lines, to digital play where the game is the story.

The toys landscape is becoming increasingly more difficult for traditional toy makers like Mattel and Hasbro due to the tablet and smartphone market. Parents have toys with them all the time now, so why would kids need an action figure to keep them busy when they can have an immersive screen time experience?

What an American girl wants
What could the prevalence of screens in kids' lives mean for shareholders? Mattel saw its fourth-quarter worldwide net sales drop by 6% year-over-year, with its North American segment gross sales falling by 10%. Barbie, one of Mattel's most well-known brands, dropped by 13%. Hot Wheels sales fell by 8% and Fisher-Price sales dropped by 13%. The only Mattel brand that showed any promise during its fourth quarter was its American Girl line, where sales went up by 3%.

Unlike many other toy lines, girls can fully immerse themselves in Mattel's American Girl line. From matching outfits and books to brand-specific stores that boast an American Girl experience, this line engages children in a way that Barbie and other less-relevant brands no longer can.

What's a kid to do?
Hasbro has been doing its best to embrace the changing toy market by producing toy lines that correspond with pop culture brands. My Little Pony, Transformers, Sesame Street, Rovio's Angry Birds, and Marvel (of Disney) are just some of the brands that fall under Hasbro's umbrella. These well-known lines, which are relevant in a number of different media outlets, have helped the company stay afloat during a challenging retail year. Hasbro's President and CEO Brian Goldner stated that the company's "heightened focus on [its] Franchise Brands and emerging markets delivered positive momentum for [it] in 2013." 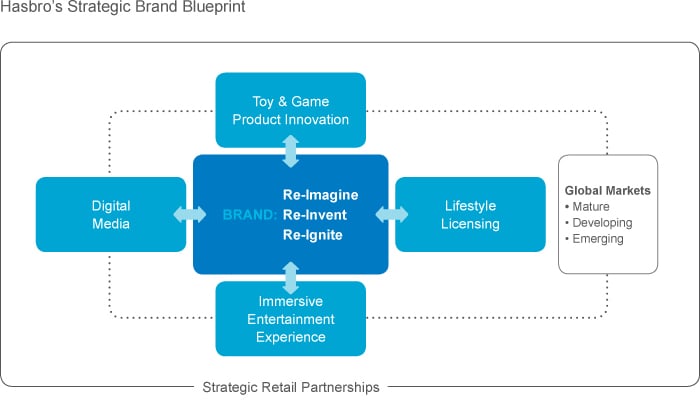 Not only has Hasbro been diversifying its physical merchandise, it's embracing a digital future for play. It has a 70% stake in Backflip  Studios, the maker of Paper Toss and NinJump. The company states on its site that it "aims to deliver immersive brand experiences that children and families around the world can enjoy anytime and anywhere, in a variety of forms and formats." It has even integrated digital gaming into its strategic plan.

Embrace the changing toy landscape
Hasbro is moving in the right direction, seeing as its franchise brands increased sales by 15% last year. It seems that Mattel, the larger of the two toy makers, could learn a thing or two from the well-diversified Hasbro. For shareholders and potential investors, it would be wise to play in the fully integrated, risk-taking sandbox of Hasbro instead of relying on Mattel's small line of less-evolved play.