When it comes to renewable energy investments, solar and wind are usually first to come to mind -- not geothermal. Although it's not winning any popularity contests, it doesn't mean that it's not worth taking a look to see if geothermal energy warrants consideration for investment, especially since the industry is showing signs of growth. According to the Geothermal Industry Association, or GIA, in 2013 600 MW of new geothermal energy came online globally. The future looks promising for the industry as well. Earlier in September, the GIA reported 70 countries that were in the process of developing 700 geothermal projects -- a vast improvement over the 46 countries that were pursuing geothermal projects in 2007.

The Energy Department also recognizes the potential value in geothermal. It just announced $10 million in funding to support the development of enhanced geothermal systems, or EGS, technology. Unlike traditional geothermal systems, EGS derives its power from hot rocks, thousands of feet under the surface, that are not naturally permeable -- in essence, EGS creates a working geothermal reservoir. 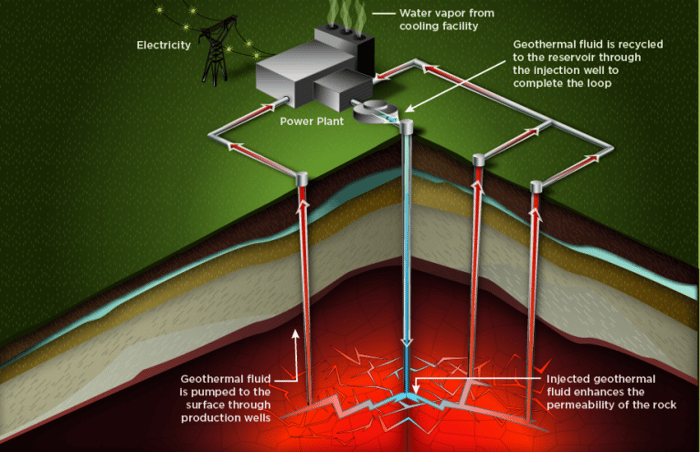 Old kid on the block
Ormat Technologies (ORA -0.84%) is a pure-play on geothermal. A vertically integrated company, Ormat provides equipment, development, and services related to geothermal projects. Its recent earnings release helps validate the findings of the Geothermal Energy Association. For 2013, the company showed top-line growth of 6.3% to $533.2 million and posted a bottom line of $41.2 million compared to a net loss of $213 million in 2012 (which included an impairment charge of $236.4 million).

Although the company's projects are geared toward traditional geothermal technology, it has already demonstrated the potential of  EGS technology. In April 2013, Ormat announced that, in cooperation with the Energy Department and GeothermEx, a subsidiary of Schlumberger, it produced 1.7 MW of additional power -- a 38% increase in power output -- from a geothermal power plant in Nevada using EGS. This is the first time that EGS generated power has been connected to the grid.

New kid on the block
Unlike the well-established Ormat, Enbridge (ENB -0.80%) is a power company that has only recently gained exposure to geothermal. The company primarily deals in the generation, distribution, and transportation of oil and natural gas across North America. Its renewable power portfolio is small -- about 1,700 MW -- but the company is looking to add to those offerings. Securing a 40% equity stake in the 22 MW Neal Hot Springs Geothermal Plant, Enbridge entered into its first geothermal project, recently finalizing the terms of its agreement with U.S. Geothermal, which has invested $14 million in the project. According to Chuck Szmurlo, Vice President, Alternative and Emerging Technology for Enbridge, this project may be just the beginning of its push into geothermal: "Neal Hot Springs represents our entry into geothermal energy, which we believe will play an important role in North America's shift toward a greener energy production mix."

Big kid on the block?
Operating the largest output of geothermal power, Calpine (NYSE: CPN) yields over 700 MW from its power plants at The Geysers in California. Although Calpine is not pursuing the development of new geothermal projects, the company is collaborating with the Energy Department in experimenting with EGS at The Geysers location. Already, Calpine has achieved one of the primary goals of the project in obtaining an additional 5 MW. Geothermal power comprises a small percentage of the 28,000 MW of energy that Calpine is capable of delivering; nonetheless, it does provide a stable source of power which is not subject to market volatility.

In its most recent earnings release, Calpine acknowledged the continued value of The Geysers by mentioning a new 10-year, power purchase agreement, or PPA, that it has entered into with the Sonoma Clean Power Authority to provide 10 MW of power beginning in May 2014. The capacity under contract will increase each year up to a maximum of 18 MW for years 2020 through 2023. This is in addition to two new PPAs with the Marin Energy Authority consisting of a one-year contract to provide 3 MW of power during 2014 and a 10-year contract to provide 10 MW of power beginning in 2017.

Foolish final thoughts...
It's easy to be blinded by the impressive returns the solar industry has provided investors of late, but investors may also want to consider warming up to geothermal. The momentum toward adopting renewable energy resources doesn't seem to be waning, and it shows no signs of slowing down in the future either. For those looking to diversify their energy investments, or those who are looking to make a green investment, geothermal might be the way to go.

Scott Levine has no position in any stocks mentioned. The Motley Fool owns shares of Ormat Technologies. We Fools may not all hold the same opinions, but we all believe that considering a diverse range of insights makes us better investors. The Motley Fool has a disclosure policy.

How Dividend Stocks Helped Me Deal With Market Losses
370%